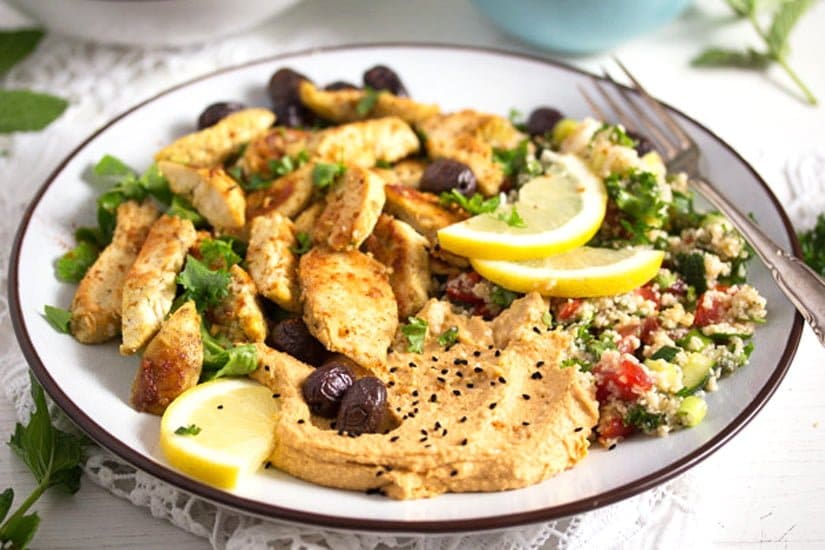 How to make a chicken shawarma plate at home. A delightful and healthy Middle Eastern recipe for shawarma served with hummus and tabbouleh.

I do cook loads of Middle Eastern food, recipes inspired by Yotam Ottolenghi’s or Claudia Rhoden’s books or recipes I get from a Syrian neighbor of ours. They are all delicious, I don’t think I have ever cooked a Middle Eastern recipe I didn’t love.

And this chicken shawarma plate is no exception. A simple and spicy way of cooking chicken, enjoyed together with other scrumptions little dishes on a large plate, perfect food for a healthy family dinner and definitely something you could make for guests as well.

Are you much into football? Or soccer, how the Americans call it? Well, I am not really… But, with the World Cup having started yesterday, there is really no way I can avoid it here in Germany. Germany loves football/soccer, Germany is the world champion at the moment, and there is football everywhere now.

On the streets, in the stores, on television, on the radio and so on. It has just started, so it is still rather quiet, but wait a few days… until Germany plays its first game tops, and all hell will break loose.

My husband is usually not a football person either, he never cares about Bundesliga (first German Federal League – I am not even sure if that is the correct translation), but when it comes to the World Cup, he gets the fever as well. He watches every game he can (when he is not at work), so every evening for the next month there will be only football in our house. Goodbye Netflix… 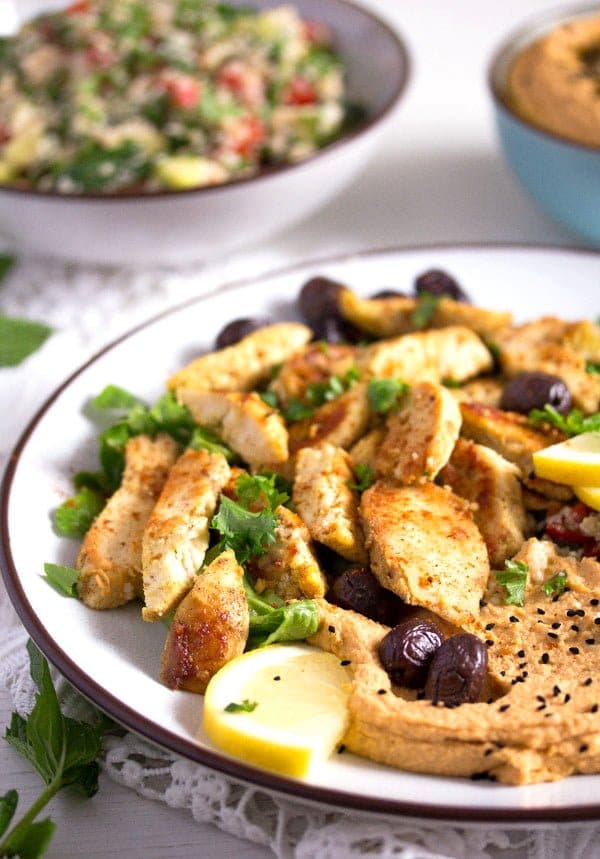 Well, for me is not as bad as it might sound now. Even if I really don’t care much about who wins the World Cup (Germany would be nice, but not mandatory… :)), I still find it rather exciting to follow a good game from time to time. And I like it when smaller teams like Iceland last time (don’t know if it was World Cup or European Cup) manage to make their way closer to the top, it is far more interesting than having the same football countries winning over and over again.

But I have never in my whole life managed to sit for 2 hours and watch a game from start to finish, not even when Germany played against Romania for instance, not even the last World Cup finals when Germany became champion.

I would go nuts if I was forced too, I just don’t have the patience, the understanding and the interest for it. Instead, I sit by either with a cookbook on my lap or with the knitting needles in my hands… I know… don’t laugh… 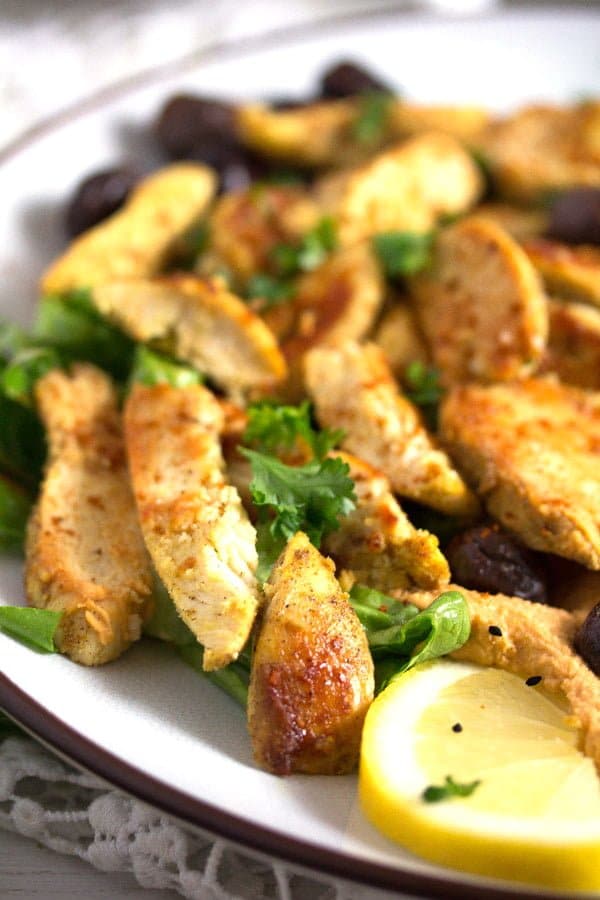 To make it more interesting for me this year, I’ve decided to bring some cooking into this whole football/soccer story and try to cook some dishes from some of the countries participating in the World Cup.

Funnily enough, when I had first thought about this, the first thing that came to mind was Italy and I had already cooked something Italian for the blog.

Yesterday, I finally managed to check the list of the participating countries and I was shocked to see that Italy didn’t qualify for this year’s World Cup. Apparently, the first time since 1958… Lucky me… now I have an Italian dish waiting there with no use whatsoever. 🙂

The first country I chose for this football-cooking challenge was Saudi Arabia. They were part of the opening game against Russia yesterday, and unfortunately for them, they lost quite dramatically: 5 to 0.

I was looking for some typical street food from the region and one of the recipes to pop up the most was shawarma. 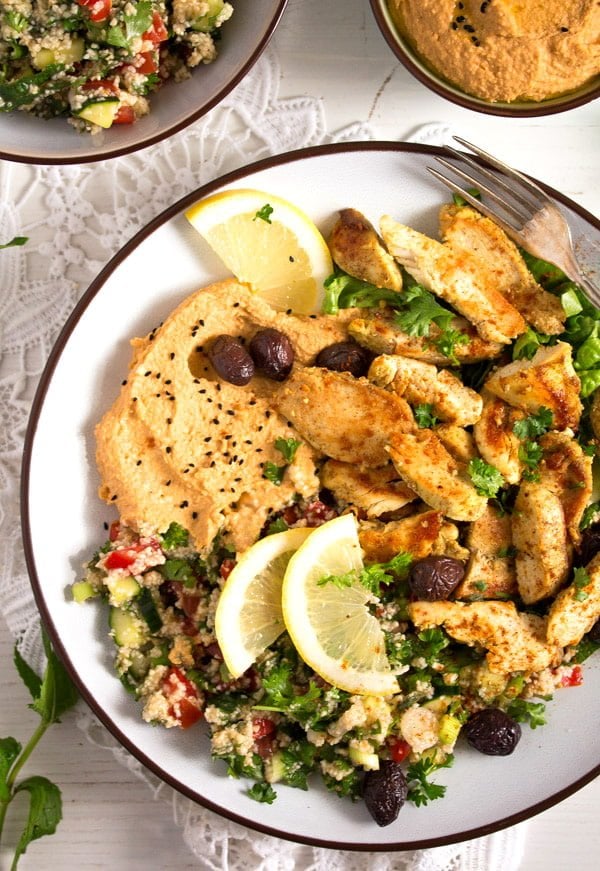 Chicken shawarma is not an extremely popular street food only in Saudi Arabia or the Middle East, but in many parts of the world nowadays, Romania included. I think that shawarma was the very first fast food I have ever eaten in my life.

We didn’t have fast food in Romania until after the fall of communism, the first McDonald’s and stuff started appearing sometimes at the end of the 90’s, I think. During a short trip to Bucharest about 20 years ago, I got to eat the first shawarma of my life. It was a rather sloppy and greasy affair, wrapped in a large flatbread and I thought it was great, I can still remember it after so many years.

After that, shawarma places started appearing in our town Sibiu as well, I did not have them often, but when I did, I’ve always enjoyed them.

So, I’ve decided to make a shawarma to celebrate the food of Saudi Arabia. An easy choice, you might think, but after all, this is about football as well and I was thinking, when possible, to choose dishes that one would enjoy eating while watching a football game.

To make it healthier than the greasy and sloppy shawarma that I remember from my youth, I went for an unwrapped version of the shawarma. Just a chicken shawarma plate of tender and spicy chicken pieces, served with hummus, tabbouleh and olives. 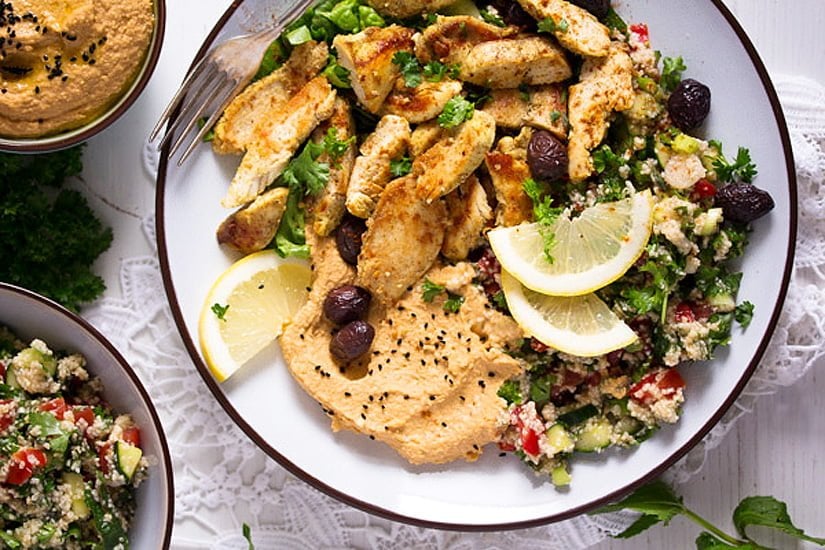 Shawarma is a kind of meat preparation where stacked pieces of meat (lamb, chicken, beef, turkey) are cooked on a vertical spit. The spit rotates slowly in front of a heat source for hours at a time and the cook keeps slicing the meat off as soon as it cooks. The result are juicy, flavorsome pieces of meat, that can be served wrapped in flatbreads or on a plate with other accompaniments.

Shawarma is similar to the Greek gyros (which is often made with pork or lamb) or the Turkish döner (which, at least in Germany, is very often made with turkey). What sets the shawarma apart from the two is the seasoning, the meat used for shawarma is seasoned with spices like cardamom, turmeric, cinnamon and cloves.

Shawarma is a delicious thing and roasting it on the spit is definitely the way to make it, whatever you can do at home, a real shawarma from the roasting spit will still be better.

But, as you can hardly get yourself a spit at home, there are, of course, ways around it. My chicken shawarma today was absolutely delicious despite the fact that the chicken was cooked in a pan and not on a roasting spit.

I used chicken breast for the chicken shawarma plate. Boneless chicken legs would be a great option as well, but boneless chicken legs are not available in Germany and I really didn’t have the time to bone the legs myself, I usually find that to be a pain… I do it when absolutely necessary, but avoid it when there is another way. And chicken breast worked great, the short cooking time making sure that the breast pieces remain moist and tender. 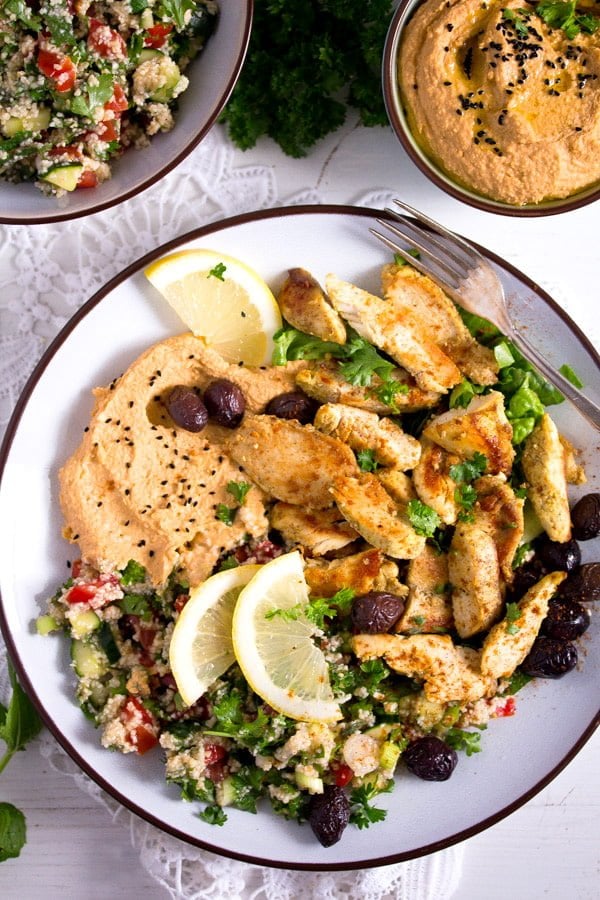 How to prepare a chicken shawarma plate

I chose to serve the chicken with hummus, my beloved recipe, the one I make on a regular basis and the tabbouleh salad from a few days ago. I also added some sliced salad leaves and some wrinkly black olives. I drizzled everything with very little extra olive oil and sprinkled the plate with nigella seeds.

We also had some sliced tomatoes and cucumbers on the side. A nice tahini or yogurt sauce would have been great as well, maybe next time.

So, if you are a football/soccer fan, enjoy the World Cup and maybe try a few of the recipes coming next on Where Is My Spoon.

The nutrition is calculated only for the chicken breast.

The same amount of boneless skinless chicken thighs can be used instead.

Looks so yummy! My husband loves gyros, bet he will enjoy this too.

You crack me up with the soccer thing! I grew up in Indonesia where world cup was also an excuse for the whole family to stay up late! My dad was a soccer addict and he got us all kids excited about watching it! World cup is a big thing in Asia too! Not so much here in the U.S. though. This chicken shawarma looks good! I made it once a long time ago and loved how flavorful it was

Leave a Reply to Marvellina | What To Cook Today Cancel Reply