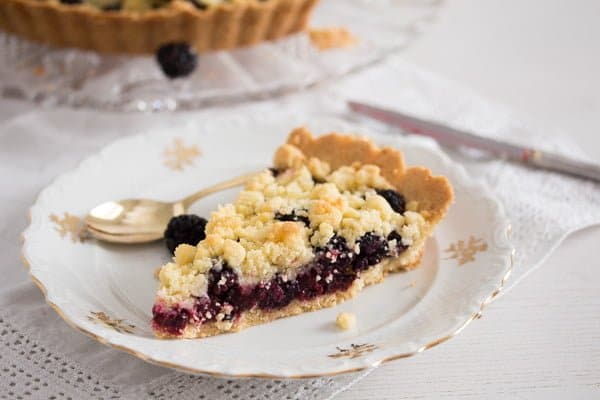 The easiest berry crumble pie recipe you could make. A blackberry pie with crumb topping, everybody just loves this pie! 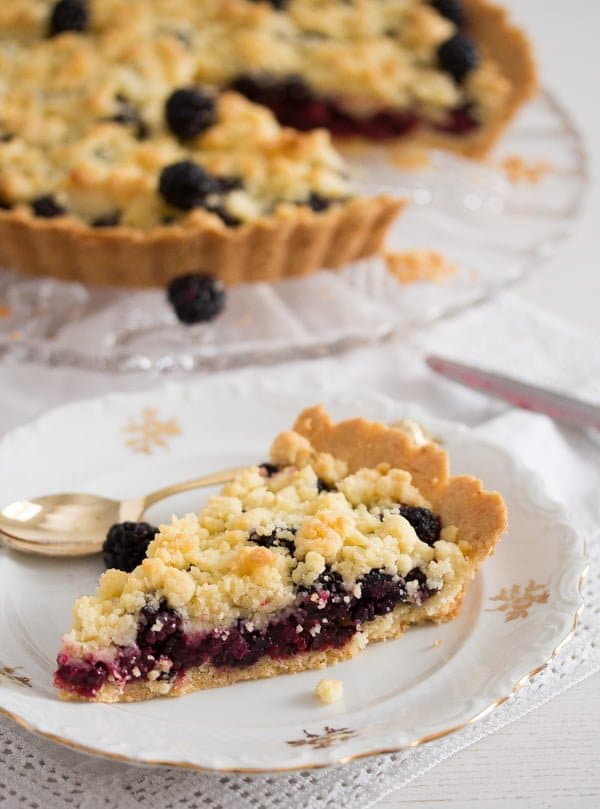 A basic crumb crust pie with a blackberry layer in between, this pie recipe is perfect not only for blackberries but for almost any other kind of berries or fruit.

After the most glorious summer we have had in years, autumn has finally arrived. Not that is already very cold, we mostly have nice sunny weather, but there are more rain and clouds involved and the heat is gone.

And for the first time in years, I don’t feel totally down at the thought that summer moved on… and that is because this year, for a change, we did have a wonderful summer, so I am not left with that feeling of losing something we didn’t even have properly. 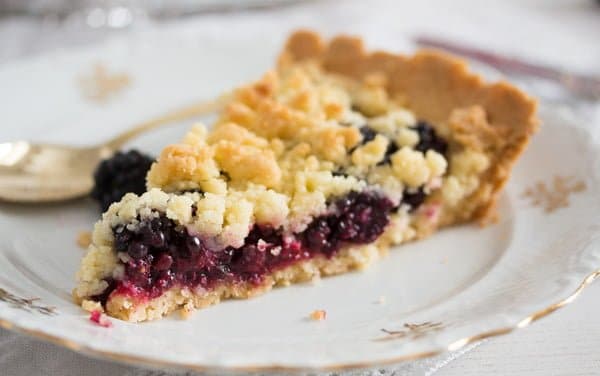 I’ve made this berry crumble pie with blackberries this time.

Blackberries are some of the last berries we can pick every year. The season starts with strawberries and red currants, goes on with gooseberries, raspberries and blueberries and kind of ends with blackberries.

Of course, there are still the plums and the apples to be found just about everywhere at the moment, but as they are not berries, we will forget about them for the moment. But I have plenty of recipes involving plums and apples coming soon… the trees are hanging so full of fruit… it’s amazing!

Just like last year when I have posted the recipe for this blackberry coffee cake, I got my blackberries from my friend’s garden. She has a rather large bush, blackberry bushes do tend to become huge, they seem to grow like weed, if you don’t take care, they will take over the garden in about 2 years.

I was able to pick a full bowl of blackberries this year again. My kids ate about half of them as they were, they are really hard to resist, large and shiny and bursting with flavor. I used the rest to make this beautiful blackberry crumble pie. It was one of the cakes I made for my son’s birthday and it was gone faster than any of the other cakes I baked. 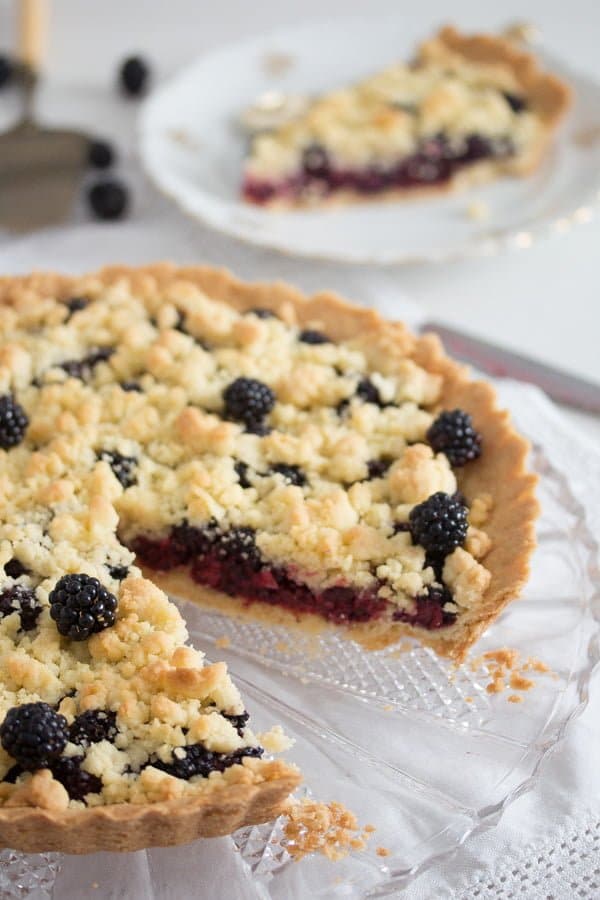 It is easy to understand that this blackberry pie with crumble topping was gone so fast, I have yet to meet anyone who doesn’t like a simple crumb crust pie with just a layer of berries or fruit in between.

My experience is that although most people will tell you how much they enjoy a nice chocolate cake, a cheesecake or a rather sumptuous layer torte, if there is a simple berry or fruit tart on the table, most of them will reach for it first.

Berry pies have something refreshing, an intensive flavor that is not given by heavy ingredients like heavy cream or buttercream, but by nature so to say, the pure, natural sweetness and sourness of the berries moderated by that heavenly, comforting crumb crust pie, that seems to be almost anybody’s favorite type of crust.

HOW TO MAKE A CRUMB CRUST PIE

This is one of the easiest methods to make a pie crust I know. I discovered this (blackberry) pie recipe somewhere online (I don’t remember where exactly, but it was in German, probably Chefkoch) and I have been making it repeatedly ever since.

One thing I feel I have to mention before I get to making the pie is the pie form you use. A regular pie dish would probably be fine and if that is what you have, use it and remove the pie from the dish the way you always do it.

However, I got myself a loose bottom tart pan

some years ago and I would never go back to a regular pie dish. These removable bottom pie dishes are so easy to use, the pies comes so easily out of the form and look perfect every time. 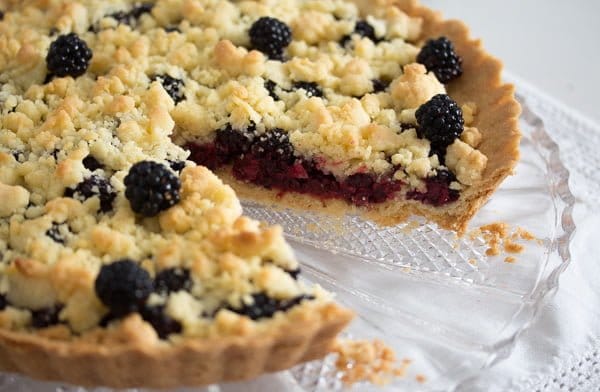 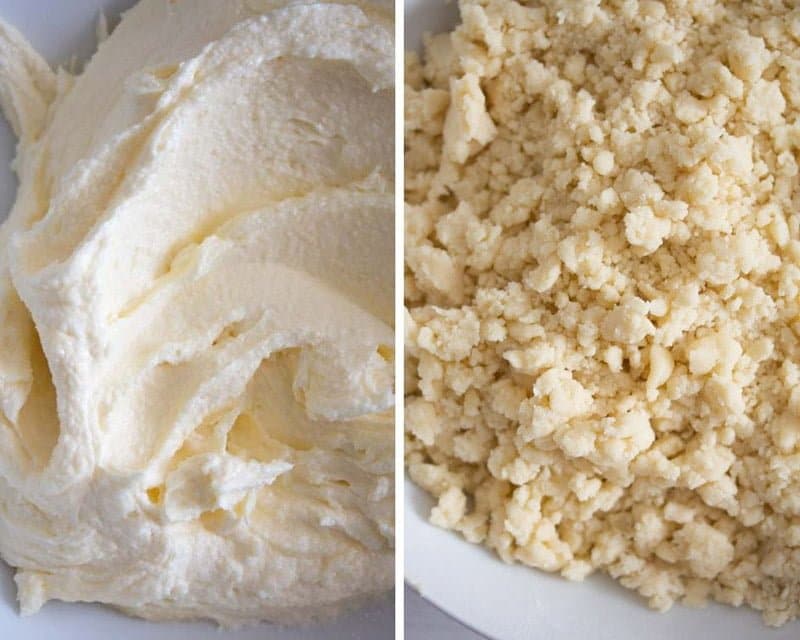 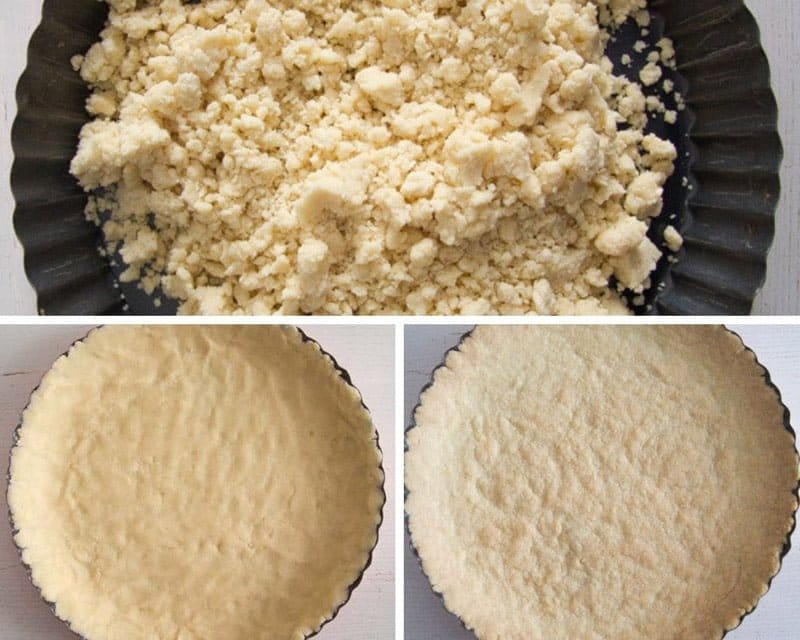 BERRIES OR FRUIT FOR THE CRUMBLE PIE

When it comes to the berries, there is not much to do either. Wash and dry them and arrange them on the crust. Cover the berries with the remaining crumbs to form a crumble topping and that’s it! Bake the pie again for about 20-25 minutes and enjoy.

This was the first time I have made the crumb crust pie with blackberries, but I have made it with blueberries and gooseberries before, with apples and plums, nectarines or peaches (even canned ones in winter) cherries and so on.

I can totally imagine this pie with crumble topping to taste amazing with sour cherries and even more exotic fruit like mango and maybe some coconut flakes mixed in the crumble topping. 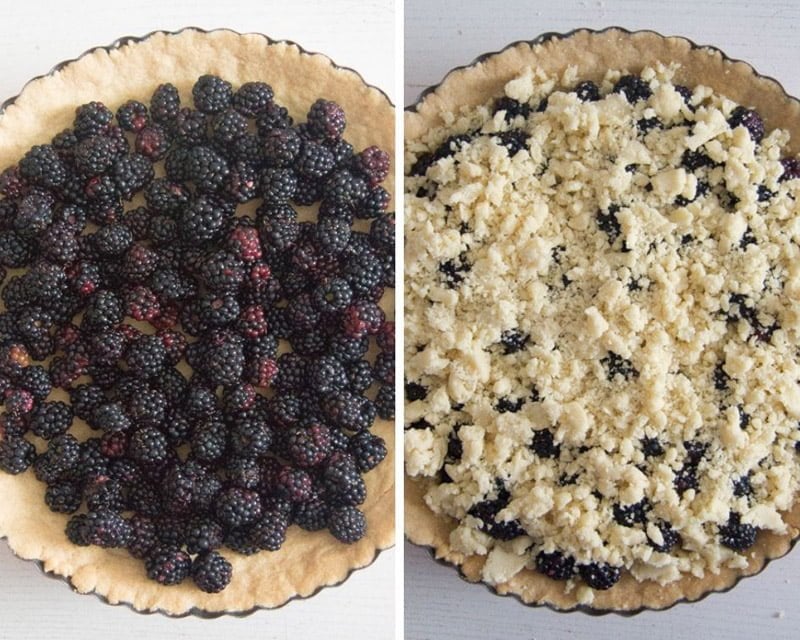 HOW TO SERVE THE BLACKBERRY CRUMBLE PIE

This is the kind of pie recipe you can make on a moment’s whim, with ingredients you always have in the house and with any kind of fruit or berry that is plentiful at the moment.

You can serve the blackberry pie with crumble topping pie lukewarm or at room temperature. If you happen to have a slice or two leftover, cover them with cling film or place them in a airtight box and refrigerate them until the next day, they will still be wonderful.

The blackberry crumble pie can be served as it is or with a dollop of whipped cream, strained yogurt or crème fraiche. If you go for crème fraiche, mix it with one or two teaspoons of brown sugar, it is sooo good! 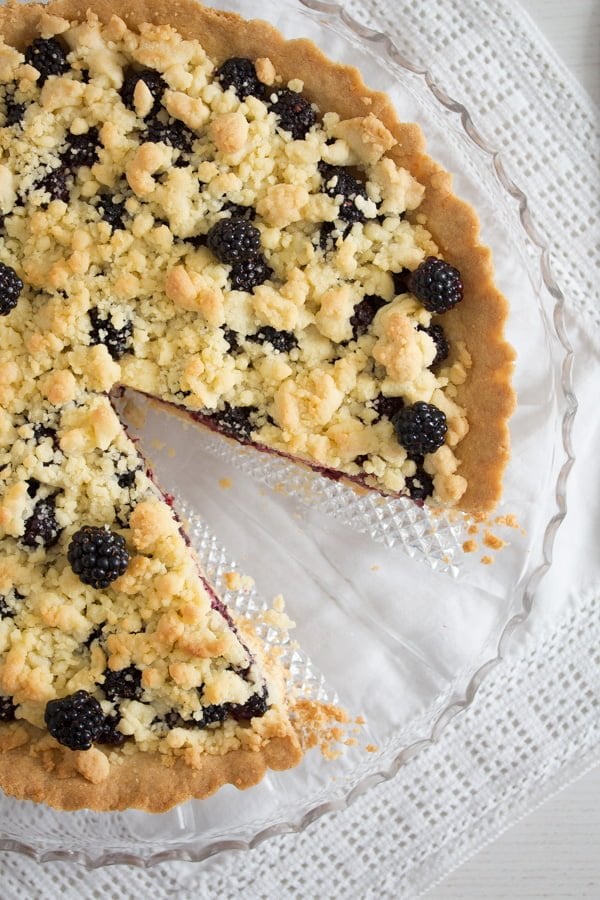 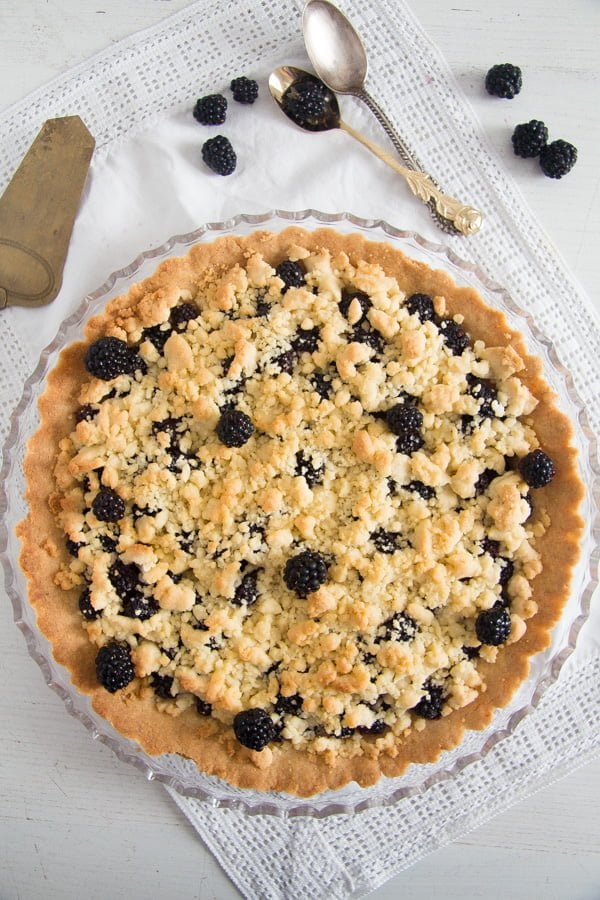 The Best Rhubarb Meringue Pie – this is the only pie to make when rhubarb is in season, no other rhubarb pie recipe can top this one.

Best Lemon Meringue Pie Recipe – again, the only lemon meringue pie you should make, I have never had any better!

Strawberry Rhubarb Pie with Almond Streusel – tangy rhubarb and flavorful strawberries topped with a crunchy and delicious almond crumble, you will love this spring pie! 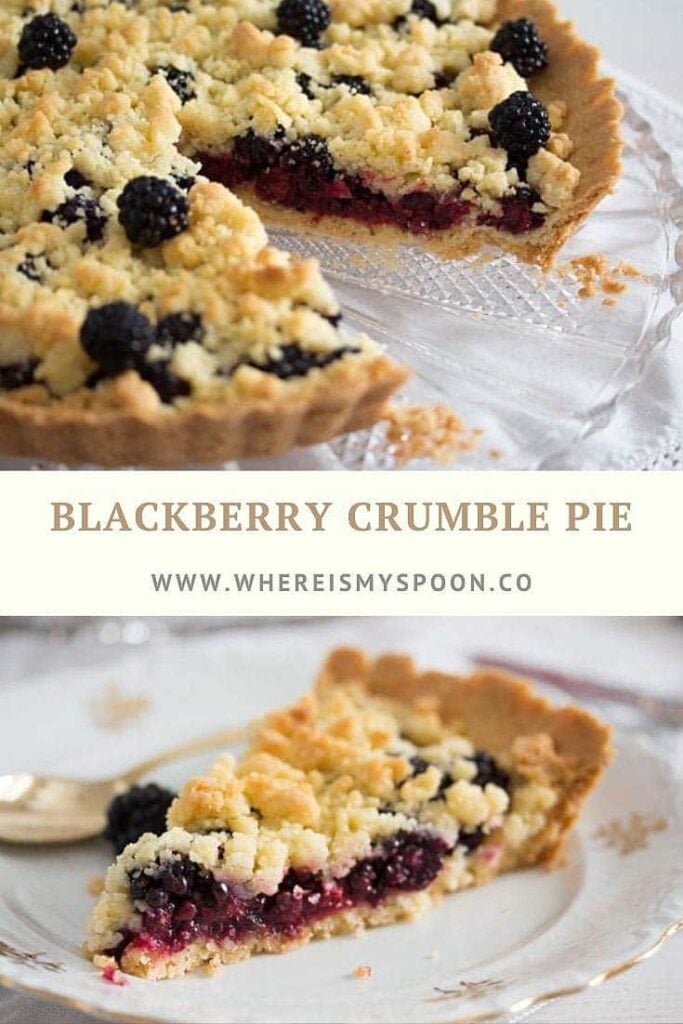 This pie screams blackberry – my favorite berry! So simple and so good! Gorgeous pie Adina!

Can’t resist anything with streusel topping! This looks fantastic.

The pie looks very good. I’ve made a quiche last week and it was so hard to take it out of the baking tray. When my husband saw how upset I was that my quiche didn’t look perfect after I got it out, he went online and bought 2 pie trays with loose bottom, so I don’t have this problem again. These are amazing, I can’t wait to bake another pie or quiche this week, to “test” them.
Why didn’t you use baking beans, so the pie doesn’t puff up?

Your husband is great, is not often that men think of such things. 🙂 I don’t really need the beans for this particular crust, I have mentioned the puffing, but it happens very rarely actually, the pie crust is usually just perfect.

Beautiful pie, Adina! And I love the crumb base! I wish I had neighbours with blackberry bushes… Here blackberries are so expensive, I never use them in pastry…

This looks so delicious! Love the crumb topping! And it looks so easy to make. I was eyeing some lovely blackberries in the market – now I know how to use them!

Hi Adina – I so get it. I know just what you mean about moving on from summer and being ok, because you had a great summer. We did too, for the first time in many years. We were able to secure a grant that allows us to hire in some help for Hudson, which allowed the rest of us to do some of the things we haven’t done in many years, like boating, etc. Things H can’t do but that we love. So I know just what you mean, I am ok moving on, because we have some wonderful memories to draw from. I love your blackberry pie with crumble topping. It is so beautiful and simple, even elegant! I would love this warm with a scoop of vanilla ice cream. I have never seen a pie pan like yours with the removable bottom and fluted edges. I have a tart pan with removable bottom, but is a different shape and definitely not a pie pan. Lovely recipe, thank you.

Hi Allie, I am glad you had a nice summer too and that things have gotten easier with Hudson. I should have thought things would be easier regarding care in the US as well, in Germany you are automatically entitled to all kind of help when you have a child with dissabilities, that makes it so much easier for the parents. But it is great that you finally found a way.

oh my! this looks so delicious! definitely trying your recipe. Love the crumb topping.

Do you think adding a touch of brown sugar to the top layer of crumbles would ruin it ?

It should be fine. Maybe not too much though, not that it gets too sweet.

So you do not mix the berries with sugar before placing in the pie shell? I don’t know that the berries found locally in the stores are that sweet and we aren’t fortunate enough to have wild berries around.

Hi Dianna. I don’t add sugar to the berries, the crumble is sweet enough.