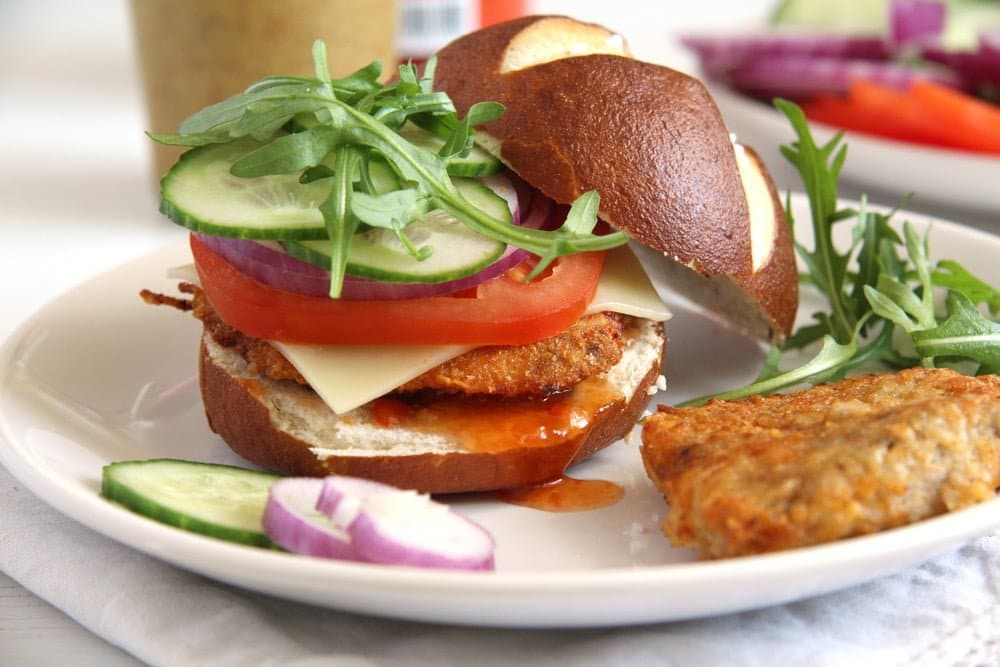 The second recipe in the Schnitzel series is basically the same recipe as the pork schnitzel from Saturday with a pretty important difference (for me at least). Although using the same ingredients and achieving the same end result, these schnitzel are not fried in lots of oil, they are just brushed with very little oil and baked.

I was a bit skeptical in the beginning, didn’t really believe that I could achieve the same crispness and nice golden color by just baking the schnitzel, but – surprise, surprise – it works!!! I would have not spotted the difference between the two kinds of schnitzel, if someone else would have served me the two without telling me which schnitzel is fried and which one is baked. 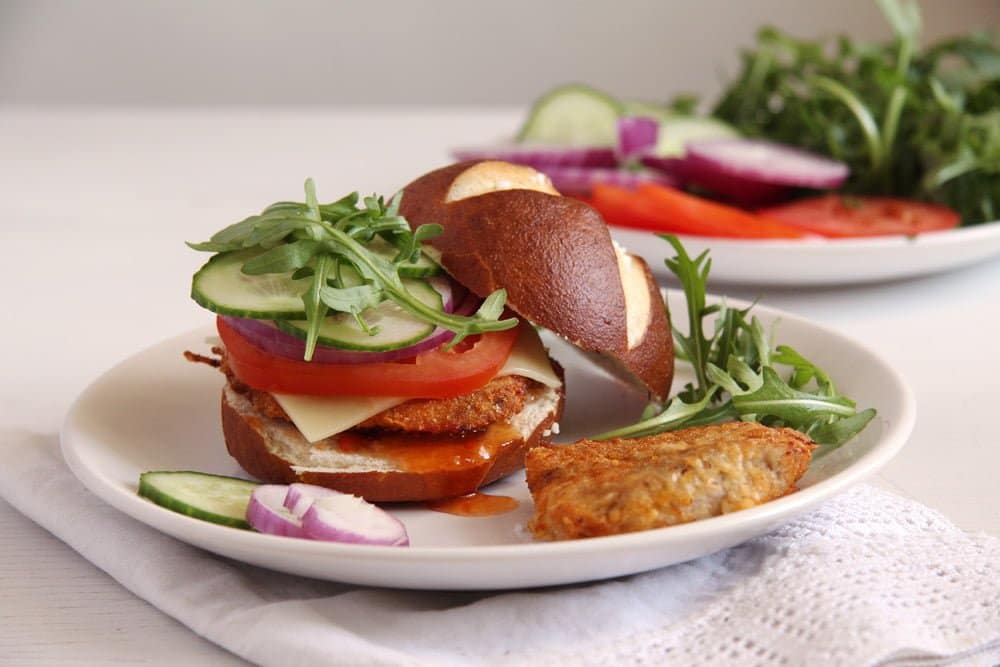 The big advantage of baking a schnitzel instead of frying it, is obviously the fact that you would not have to use and then eat so much fat. But another huge advantage in my eyes is the “cleanliness” of this method. No more splutter and fat everywhere, no frying smell filling every corner of your house. And you can place all of your meat on one baking tray and put it in the oven, instead of having to stay in front of the stove, frying the schnitzel only two at a time. This would allow you to make a larger amount of schnitzel for guests, for instance. And no more need of taking a shower and changing all your clothes after you’re finished cooking (I have to do that all the time, I cannot bear this frying smell in my clothes and in my hair). 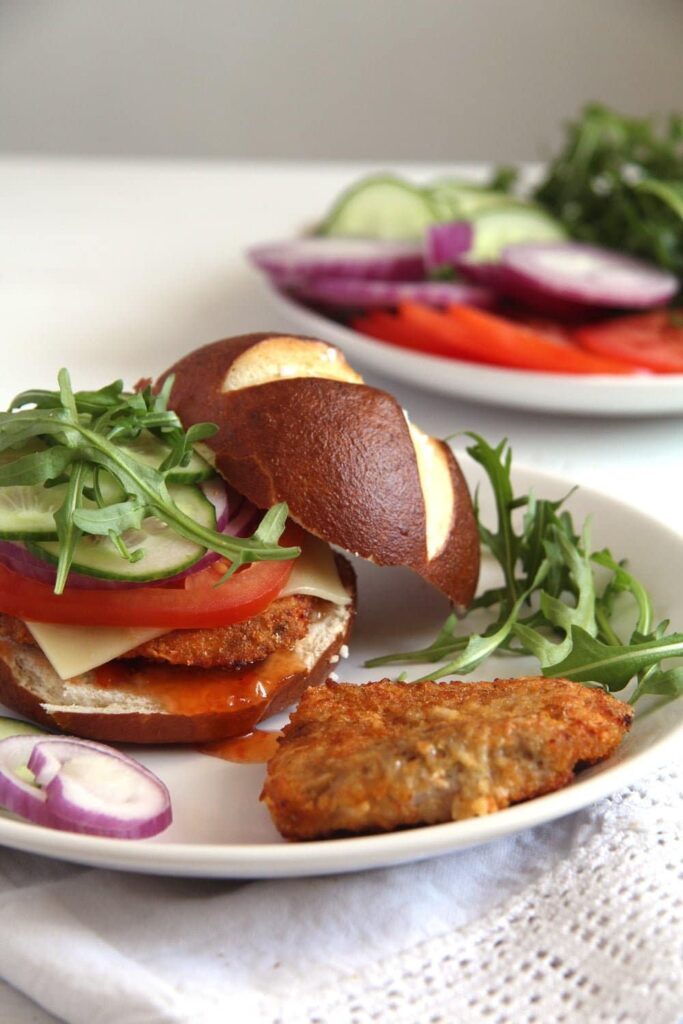 For this recipe I halved the normal-sized pork schnitzel, because I wanted to have smaller pieces which would fit into a bun. I baked the schnitzel for 20 minutes, if they are larger increase the baking time slightly, to about 23-25 minutes. I always check by cutting one of the schnitzel in the middle. You can use this same method to make chicken or turkey schnitzel, for instance, in this case the cooking time will also be shorter.

I served this mini-schnitzel as burgers in a bun with a slice of cheese, chili sauce and vegetables. It was a great combination, which I am sure I will make again, the kids absolutely loved it. You could also serve the schnitzel the traditional way with hunter sauce, potatoes and green salad or with potato salad, mashed potatoes, noodles etc. 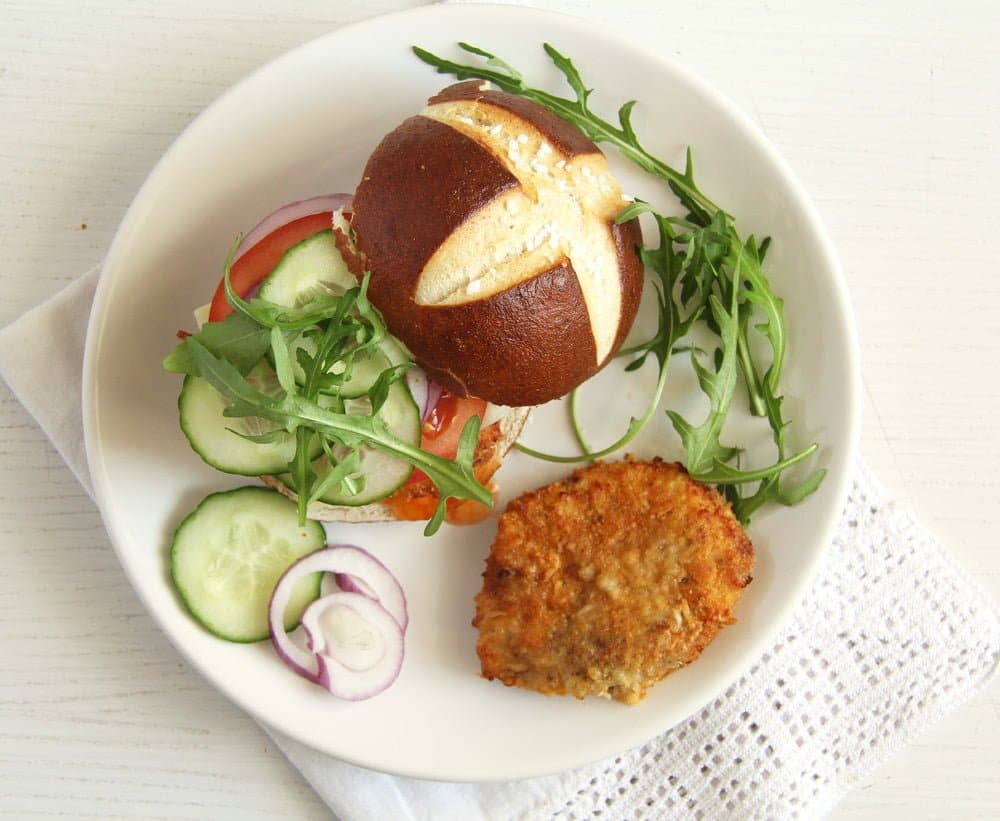 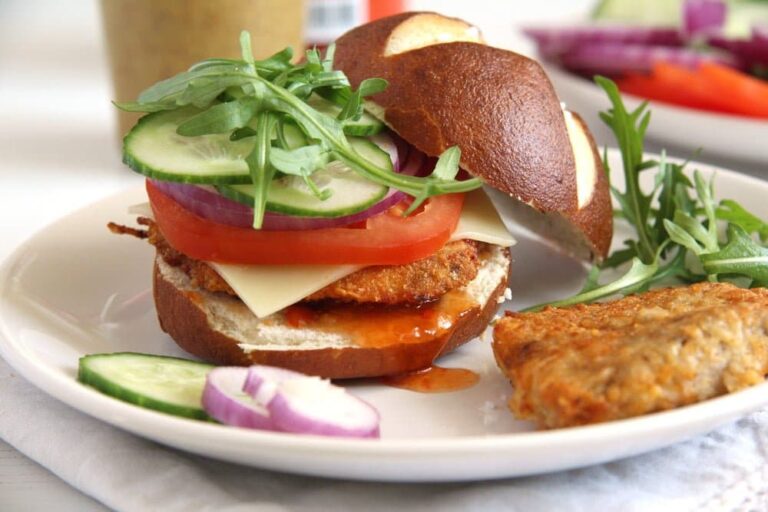 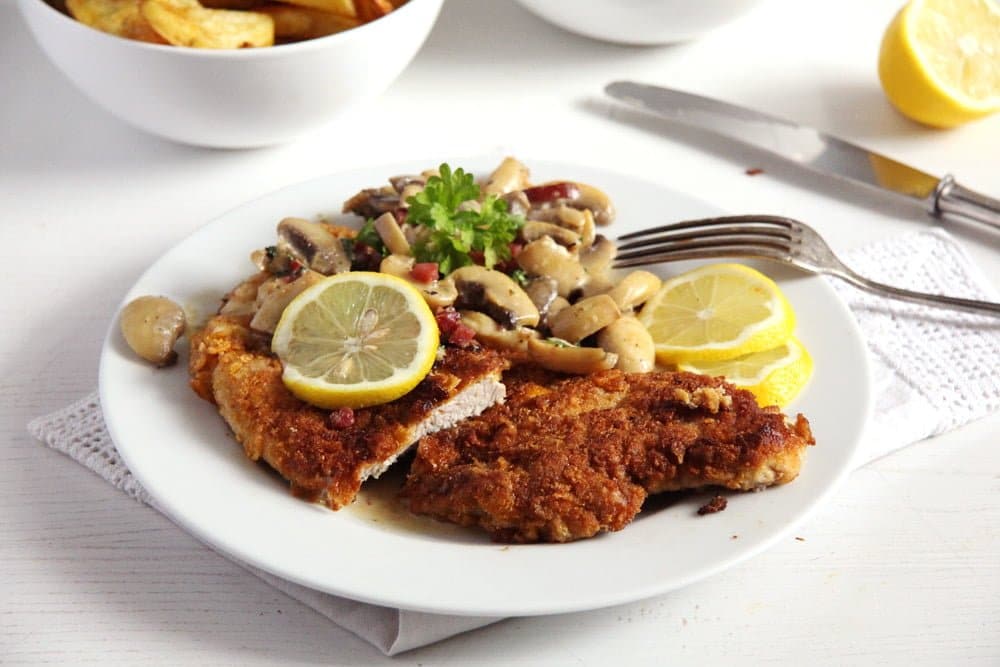 Schnitzel has been on my must-learn-to-make list for literally YEARS! Can’t wait to try yours – love the burger version!

I hope you try it, Kate, it is much easier than it looks… 🙂

Baking the schnitzel is a great idea! I also love that you made these into a burger. I love the crunch that you’d get from the schnitzel!

It was a really good combination.

Haven’t had a schnitzel in a long while…this looks really inviting!

Thank you, Angie, I am glad you like it!

You and your family eat so well, Adina!!

This looks wonderful Adina. I so with you about frying, I can’t stand the mess and smell that permeates everything. This looks just as good!

The smell is the worst, isn’t it? Lingers everywhere for days…

I much prefer baking to frying as well, so much less fuss! I have never made schnitzel before, but this looks so good!

My husband is crazy for pork schnitzel and served in a pretzel bun like a burger… Oh, I am sure he would love it even more.

I’ll need to try your baking method, this sounds brilliant!

They look perfect and I love that they are baked instead of fried 🙂 Healthier and less fuss – total win! Need to make up some of these burgers soon!

Ooooh, baked dishes are one of my favorites. I am sure gonna try this genius method of yours! Love this for spring!!

A schnitzel series? What fun!! And the burger is ingenious 🙂

Schnitzel is scrumptious and I love that these aren’t fried in tons of oil, yet still crispy! This burger looks insanely delicious! Cheers!

Schnitzel,Pretzel buns, and me are like super best friends !!!!!!! 🙂

What a lovely meal. I really like it that the schnitzel is baked and not fried.

WOW! I totally love your recipe! The schnitzel burgers look fantastic! MOUTHWATERING! Thanks so much for sharing!

Perfection! These burgers look amazing, Adina, and oh how I love those German Brötchen! 🙂

Oh I most definitely agree with you on frying being so annoying! Not only does it make the meat greasy, as you say it’s just really messy and the smell does get all through your house and even your clothes. Your baked schnitzels look like the perfect alterntive, Adina!