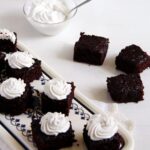 Either you are eatinging vegan all the time or just during the fasting time, you will love this decadent treat!

The Easter Fasting time is the weeks before the Easter celebration, which this year will take place on the 16th of April. The majority of Romanian people are Orthodox and I feel that in Orthodoxy the rules and the keeping of the fasting time are stricter than in the Protestantism in Germany, for instance.

My grandmother used to (loosely) keep the fasting times, so as a child I used to keep that without even noticing it. If I wanted to eat meat my grandmother would make it for me most of the times, she never tried to force me to fast, I would just do it because I would eat what my grandma cooked and during these times it was mostly bean soups and vegetable stews, lots of potatoes, margarine and jam.

I will start with these coconut milk brownies, which you might think are not exactly the best way of starting to fast, not with something sweet and quite decadent anyway.

Don’t judge me though, they are so good I just had to share them and most importantly, I wanted to celebrate the new look on my blog and what better way to celebrate something new on a food blog that with a recipe for a delicious cake.

This is not a typical Romanian recipe, but still something I enjoy very much during the fasting time. We do have our particular brownie recipe in Romania, which in my opinion is quite different from the typical American brownie, but just as delicious as that.

Our Romanian brownie is always covered with a sweet meringue topping and looks quite similar to this coconut cream brownie.

Brownies with Strawberries and Chocolate 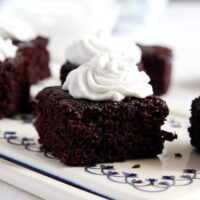 Looks delicious! I was wondering how long you can keep the brownies. And is it possible to keep the coconut cream in the fridge for a few days?

Hi Lianne. You can keep the brownies in an airtight container at room temperature for about 3-4 days. If you want them to keep for longer place the container in the fridge. I am not sure about the coconut cream in whipped form, I don't think it will keep nicely. It is better to whip it just before serving.

Your new look is great, Adina - and so are these dark, rich brownies. They do look decadent and I just love whipped coconut cream. Congrats on your new look. -Kim

Congratulations with the blog's layout changes! It looks fantastic. As well as your brownies which for me are much more appetising than the usual ones. (The Black Fast Day does sound scary indeed...).

I always learn so much here Adina, interesting to hear about the fasting called Big Friday. Here in America, the Friday before Easter is called Good Friday, but I don't know if people fast on that day. The brownies look lovely and I have always wanted to try my hand at making that coconut cream. Delicious!