A vegan pasta dish made with soy granules and lots of vegetables, this chunky meatless spaghetti sauce is delicious, healthy and satisfying. 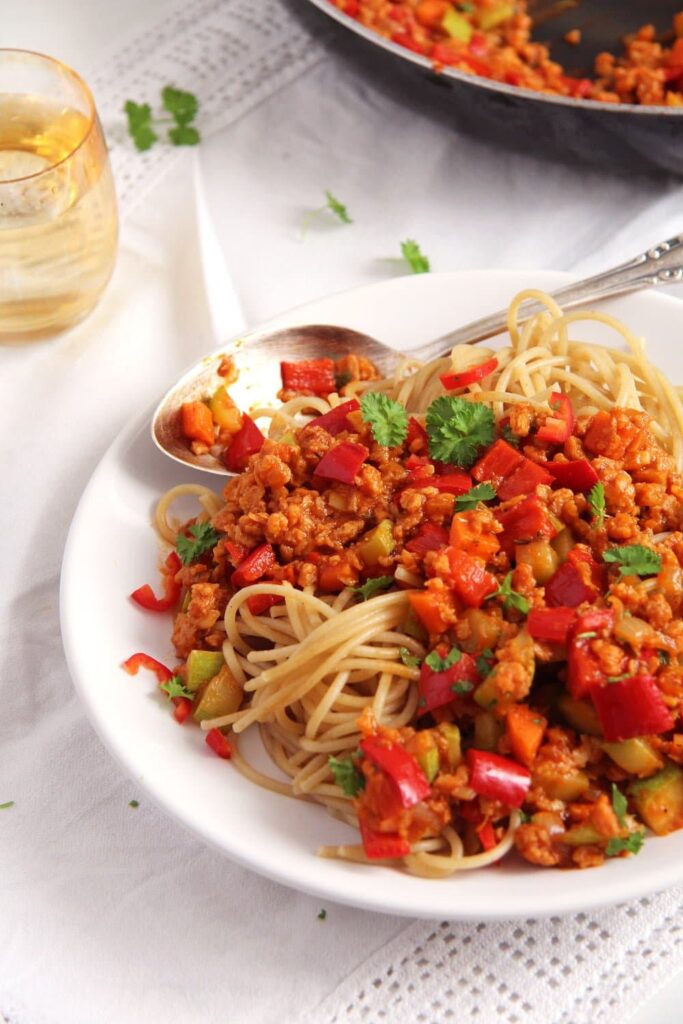 Pasta dishes are a staple in most houses, everybody loves pasta, most pasta dishes are easy, quick and cheap to make and that makes them perfect weeknight meals in most families.

How about trying a vegan alternative to the usual meat sauces? A meatless spaghetti sauce where the meat is replaced by tiny soy granules. If you have never tried textured soy protein before, you will have a great surprise!

This vegan pasta dish with soy is filling, healthy and mega delicious, even non-vegans or picky kids will like it.

Like I have already mentioned a few weeks ago in the in the Vegan Soy Stew post, soy granules are quite a popular ingredient in Romania during the fasting times, a delicious and very cheap alternative to meat.

There are lots and lots of recipes using textured soy, not only in the form of granules, but also as chunks to make stew or goulash or even in form of steaks.

I have tried the steaks myself as well and I find them OK, but generally I prefer to cook the granules or the chunks with lots of veggies and sauce.

The idea for this recipe came to me one day when I wanted to make spaghetti bolognese but did not want to go shopping for the ground meat. I remembered that I still had about half a bag of the soy granules in my pantry and thought I would give it a try.

The result didn’t really have much in common with spaghetti bolognese, but we found the vegan soy granules sauce delicious, the whole family was completely satisfied and the kids ate all the vegetables in the sauce without complaining one bit.

WHAT IS TEXTURED SOY PROTEIN (TSP)?

The textured soy protein is a by-product of extracting soybean oil. It is often used as a meat replacement and sometimes as a meat extender and has a protein content comparable to certain meats.

It is considered a low cost healthy food especially if combined with vegetables, like in this meatless spaghetti sauce recipe.

Textured soy protein in a processed product and its consumption meets with controversy in these days where clean eating is more important than ever. However, I don’t worry much about that, we eat textured soy protein just like we eat meat and that is: in moderation. 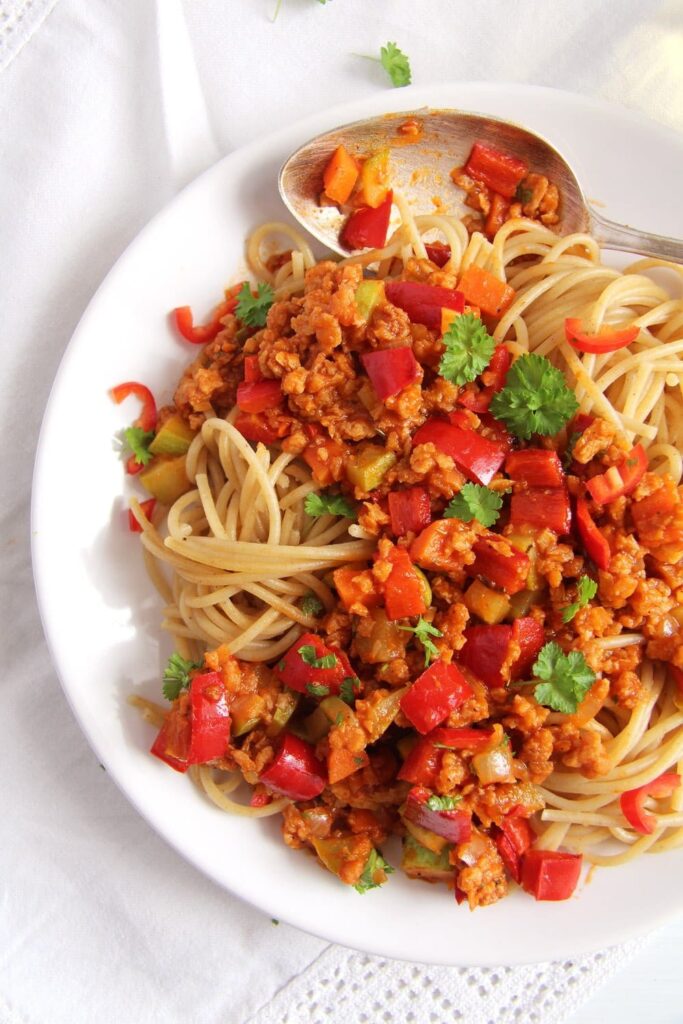 WHAT TO DO WITH TEXTURED SOY PROTEIN?

TSP is very versatile, there are lots and lots of delicious vegan dishes you could try. One of our favorite vegan meals is this vegan soy stew, for instance.

You could also use the soy protein to make stir-fries, you can fry it in the pan and make burritos (so good), tacos or enchiladas.

You could add it to soups or chilies, you could fry it and have with rice, like in this Jamaican rice and peas, which I serve either with fried eggs or with fried soy strips.

HOW TO PREPARE TEXTURED SOY PROTEIN?

The best advice I can give is to follow the packet’s instructions. TSP comes in different shapes and sizes and that is why the soaking and/or cooking times differ from sort to sort and sometimes from brand to brand. 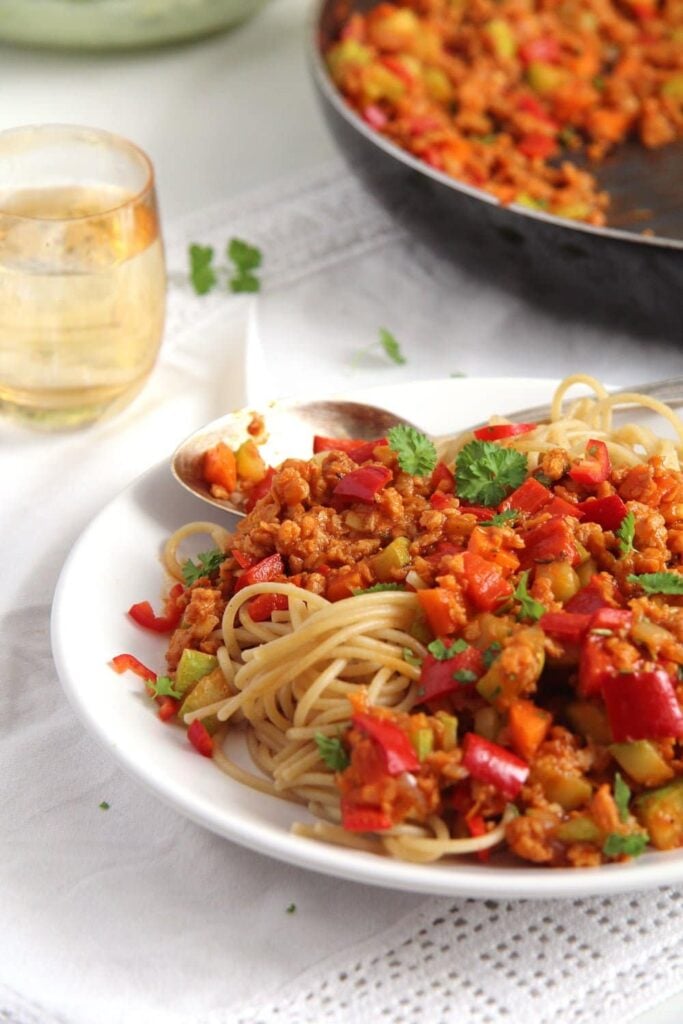 HOW TO MAKE MEATLESS PASTA SAUCE?

SKILLET MACARONI AND CHEESE – only three ingredients and less than half an hour cooking time.

PASTA WITH EGGPLANTS – a comforting pasta dish featuring one of my favorite vegetables in the world: eggplants.

CABBAGE NOODLES WITH SOUR CREAM – a pot full of noodles and cabbage with sour cream,  this is the perfect winter pasta dish. 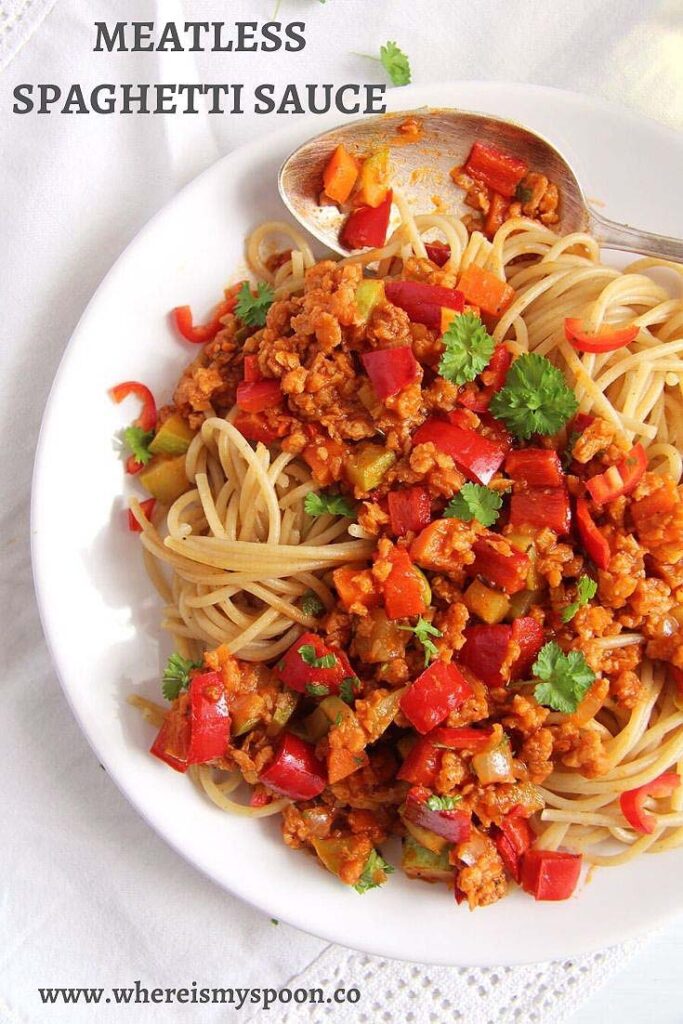 That vegetarian sauce looks almost too good to be true.

One thing I do not do is partake in fasting. I just refuse to abstain from food or a group of food… ever. Well, I don’t diet either, because same reason. 😉 I like food just waaaaaaaaay too much. Anyways, this sauce looks delicious! It’s almost hard to believe it’s vegan!! I could definitely eat this sauce with just a spoon! YUM YUM! Cheers!

I bet I won’t miss the meat! the sauce is so chunky. Just the way I like it. Such a great list for fasting idea!