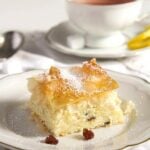 Vargabeles or Hungarian sweet noodle pie made with filo pastry, cheese, and raisins, you can serve it as a dessert or sweet main meal.

Vargabeles or Hungarian sweet noodles, a delicious dessert made with layers of pastry filled with a sweet cheese and noodle filling. Unusual, but so delicious!

Apparently it was created in Cluj – Romania by a Hungarian innkeeper named Vargas during the 18th century. Another story attributes this recipe to the Darvas family, which also lived in Cluj, but at the beginning of the 20th century. They had a restaurant as well and managed to make this dessert very popular in the region.

However, regardless its exact origin, this recipe is really worth knowing and baking. Not to mention eating, it is a real comforting, sweet delight.

Cheese and other dairy: 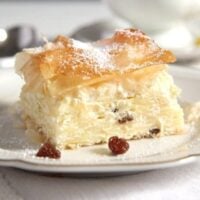 As a Travel Planner and Experience Maker who specializes in experiential river cruisetours, one of my favorites are those along the majestic Danube River. Ports of call on these itineraries almost always include Budapest, Hungary. Market tours and cooking lessons with a local chef is a popular shore excursion among foodie travelers with a taste for authentic adventures.

Rather, just like language, music, or any other aspect of culture, food can reveal so much about the country from which it originates. This is why, more often than not, one of the first questions we ask someone who has returned from a trip is, “How was the food?”

The food of Hungary can be considered a melting pot of the continent, with a culinary base formed from its own, original Magyar cuisine. The Magyar are a ethnic group native to Hungary who share a common culture, history and speak the Hungarian language. There are an estimated 13.1–14.7 million ethnic Hungarians and their descendants worldwide, of whom 8.5–9.8 million live in Hungary.

Hungarian cuisine was influenced by Austrian cuisine under the Austro-Hungarian Empire; dishes and methods of food preparation have often been borrowed from Austrian cuisine, and vice versa. During that period, considerable numbers of Saxons (a German ethnic group), Armenians, Italians, Jews, Poles, Czechs and Slovaks settled in Hungary, also contributing the different new dishes. Some cakes and sweets in Hungary show a strong German-Austrian influence. All told, modern Hungarian cuisine is a synthesis of ancient Uralic components mixed with West Slavic, Balkan, Austrian and Germanic.

Traditional Hungarian dishes are primarily based on meats, seasonal vegetables, fruits, dairy products and cheeses. Bread is perhaps the most important and basic part of the Hungarian diet. Paprika, a quintessential spice and pepper is often associated with Hungary and is used prominently in a handful of dishes. Typical Hungarian food is heavy on dairy, cheese and meats. Chicken, pork and beef are very common, while turkey, duck, lamb, fish and game meats are also eaten but not as frequently. Hungary is also famous for the high quality salamis and sausages it produces primarily from pork, but also poultry and beef.

The Hungarian sweet noodle cake, or vargabéles, was invented by a Klausenburg innkeeper named Varga. It is one of the Hungarian specialities, a very common cake. It is definitely worth trying, either during a visit to Hungary or even in your own.

I've heard of this but have never seen one and had no idea what the recipe looked like. This looks SO VERY DELICIOUS! What a unique dish in both flavor and texture. Thanks for sharing this!

the raisins in this are so unexpected but awesome! i haven't tried anything like this ever, but i know i'd devour it!

This is such a delicate looking dessert with all those flaky layers, but I bet it it heavy on flavor.

Noodles in a cheese pie? How interesting, fun and delicious!