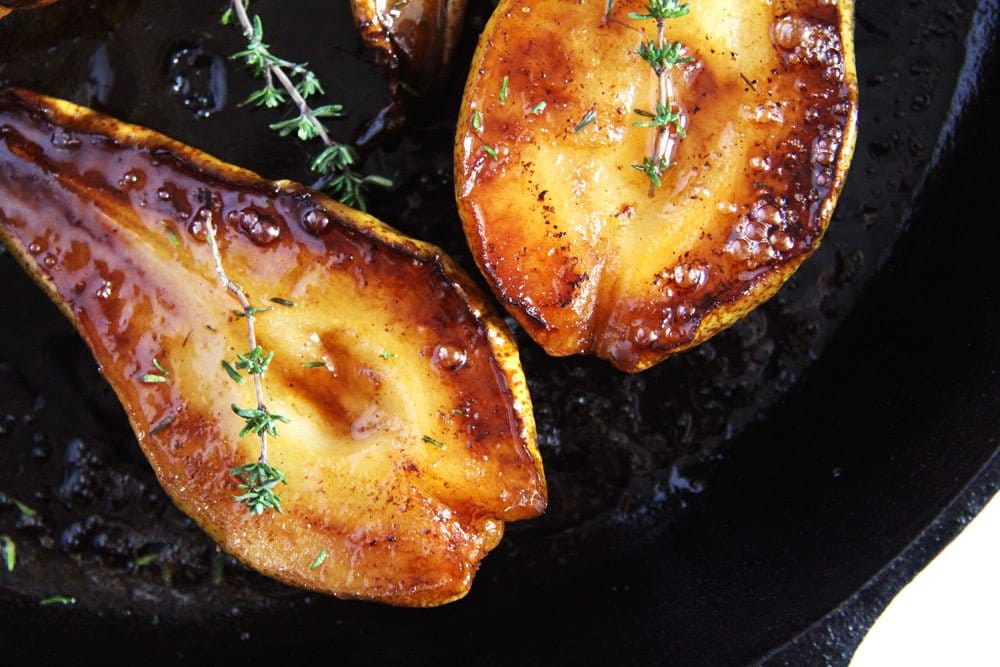 Only four ingredients, but such a delight! An easy to make pear dessert: caramelized roasted pears with balsamic vinegar and honey.

A very easy recipe for you today. After yesterday’s extravagant Dobos Torte – Hungarian Cake, I decided to give you another Hungarian dessert, a pear dessert that is super easy to make: caramelized pears roasted in the oven and drizzled with honey and balsamic vinegar.

I didn’t even plan on making this roasted pears recipe, it was not something that immediately caught my eye while perusing Silvena Rowe’s cookbook The Eastern and Central European Kitchen: Contemporary & Classic Recipes

But while having a second look (or maybe a 10th look, I have been going through this wonderful book many times) and concentrating more on Hungarian recipes, which is my theme at the moment, I thought I’d tried this recipe. 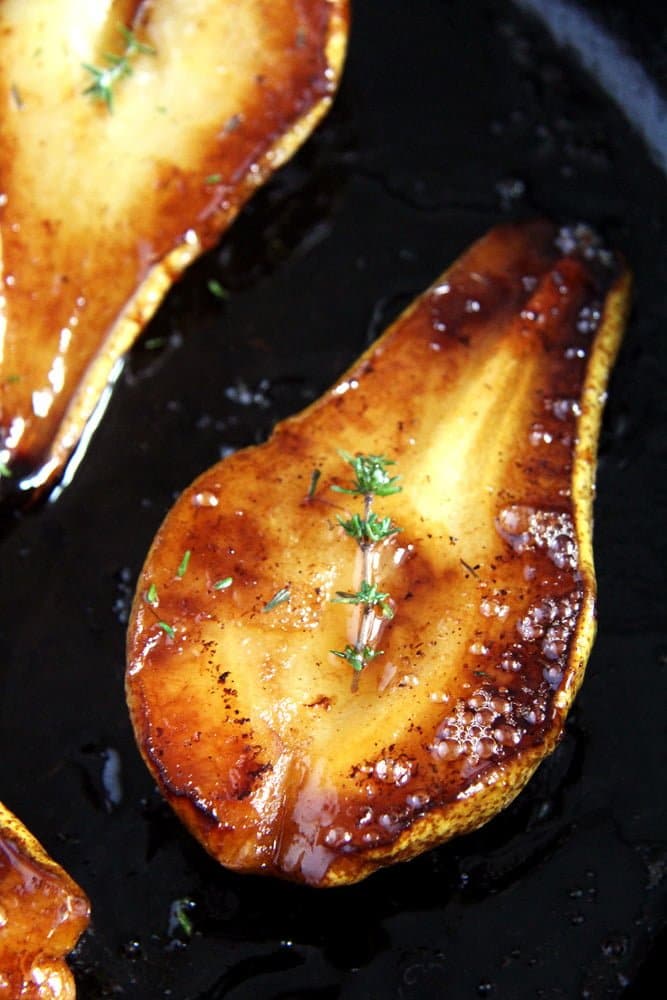 It was a perfect fit as I had bought some rather under ripe pears the day before and I always have butter, honey and balsamic vinegar in the house. So yesterday, after we finished lunch (we had these delicious German Meatballs in Caper White Sauce – Königsberger Klopse again) I told my family to give me another half an hour and then they could have dessert. A pear dessert!

My daughter was a bit disappointed, she would have preferred a piece of chocolate immediately, but she had no choice, she had to wait. But half an hour later she was more than happy to devour a much better tasting (not to mention healthier) dessert in form of half a caramelized pear roasted and drizzled with honey. 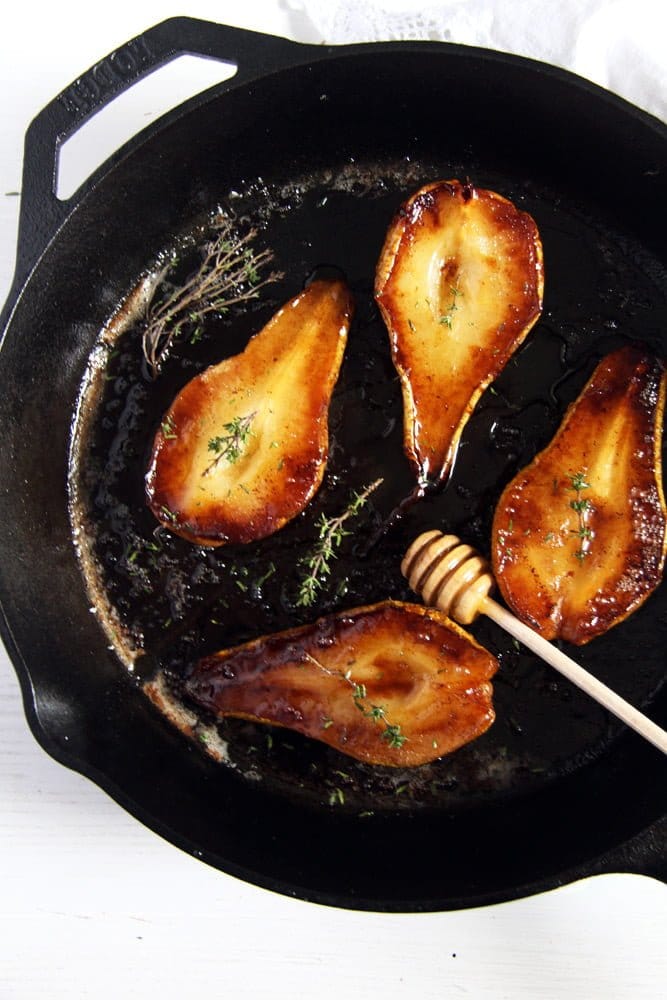 HOW TO MAKE ROASTED PEARS?

I did not change the recipe much, there was not much room for change, everything is so simple.

What I did though was to reduce the butter quantity, I only took 2 teaspoons instead of 2 tablespoons. I did not miss the extra butter at all, the pears were perfectly delicious with less butter. And I only took 1 heaped teaspoon of honey per half a pear because I was not in the mood of measuring half a cup of honey.

We all love this simple caramelized pears, there is no doubt about that, roasted fruit is something so easy to make, yet so delicious.

I do have my fun roasting fruit, just have a look at these Roasted Pears with Vanilla Yogurt or these Roasted Sweet Cherries with Cinnamon and Strained Yogurt, but each time I make roasted fruit I think I actually don’t do it often enough. Roasting fruit is one of the easiest to make and healthiest desserts I can think of.

And how about trying roasted pears in a savory way? 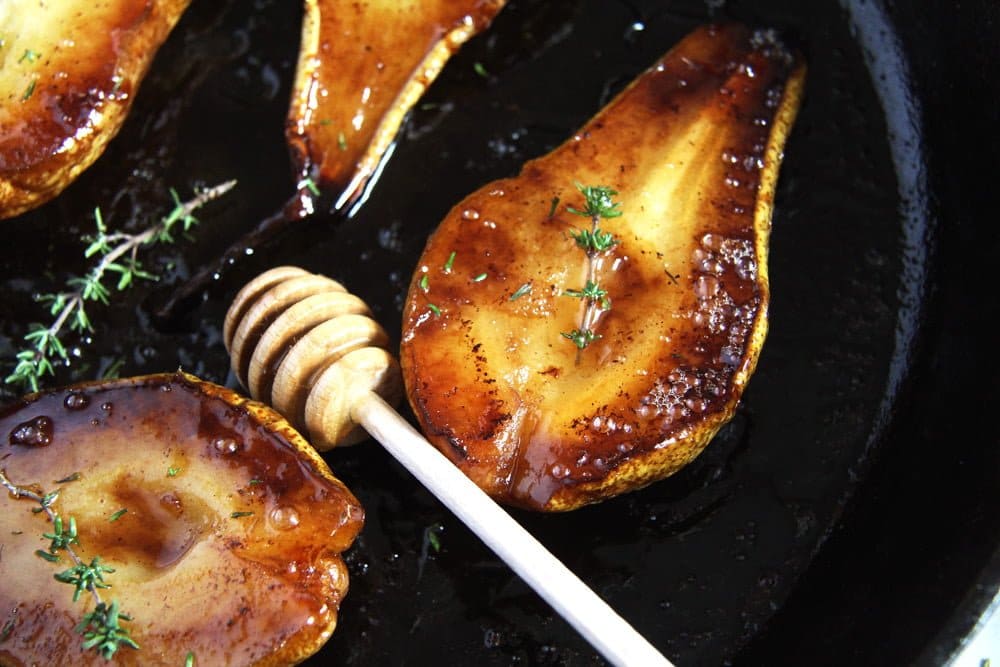 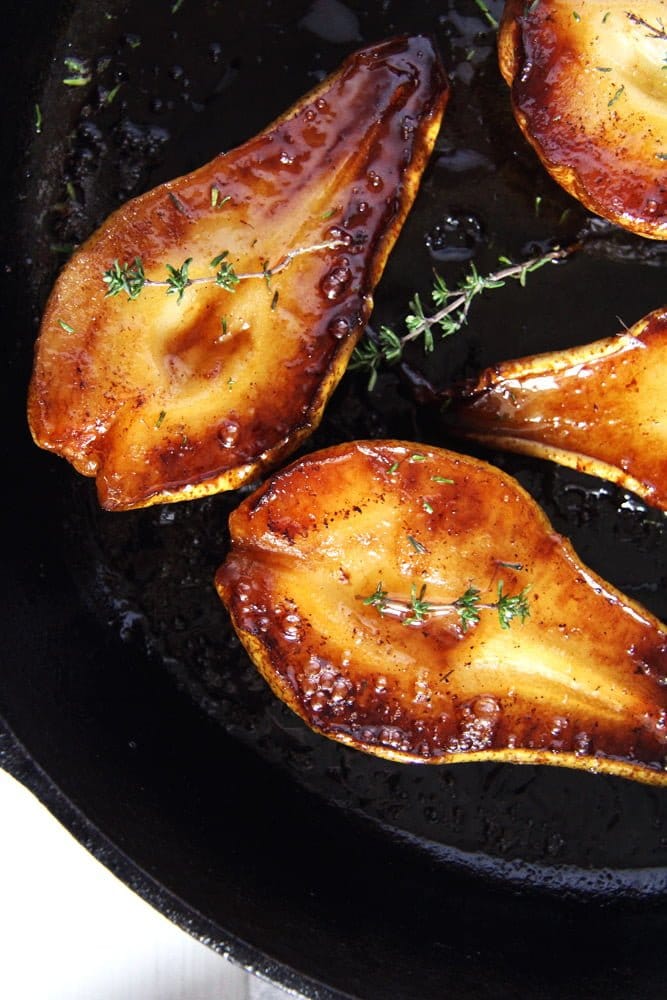 Rhubarb Crisp with Apples and Oatmeal

wow they look beautifully caramelized and so good!

The caramelization is perfect! I love how simple, yet how elegant this is. Beautiful pictures! 🙂

Oh, these pears look absolutely heavenly, Adina! I need to put them on my holiday list!

I Love the combination of balsamic vinegar and honey. We have unsweetened Chinese black vinegar that when I sweetened with sugar or honey, tastes pretty similar to balsamic vinegar, which I love

These pears are roasted and caramelized to perfection, Adina! It’s a perfect dessert for a chilly night. I’ve got to try it!

These look wonderful, I just happen to have a big bowl of pears! I hope those little people didn’t have to wait for you to get pictures before they enjoyed their dessert 🙂

Adina, these pears look heavenly and I LOVE how easy they are! You can’t go wrong with balsamic and honey, I bet they’d taste great with some crumbled blue cheese and nuts too though I doubt your daughter would still let me call them dessert 🙂

how delicious! that glaze is so shiny and those flavors are so appealing!

Wow, they look delicious. I would love to try them. The glaze looks so shiny and pretty.

Great recipe, I’m thinking of making it for Thanksgiving. When are the pears turned cut side up? Before they’re put in the oven? Before adding the vinegar? Before the honey?

Hi Joan. Before the balsamic.

I’ve done something similar with peaches, but never with pears. These look quite scrumptious!

nice! but I have a problem with your website… the social buttons are covering the text, so it’s not easy to read…

I assume you flip the pears to cut side up when they go into the oven?

No, but you can flip them halfway through if you feel they are getting too brown on one side. Depends on your oven.

Could I do these ahead of time.

I have never done it. You can try roasting them for the first 20 minutes. Before serving drizzle with balsamic and heat for another 10 minutes or until heated through.