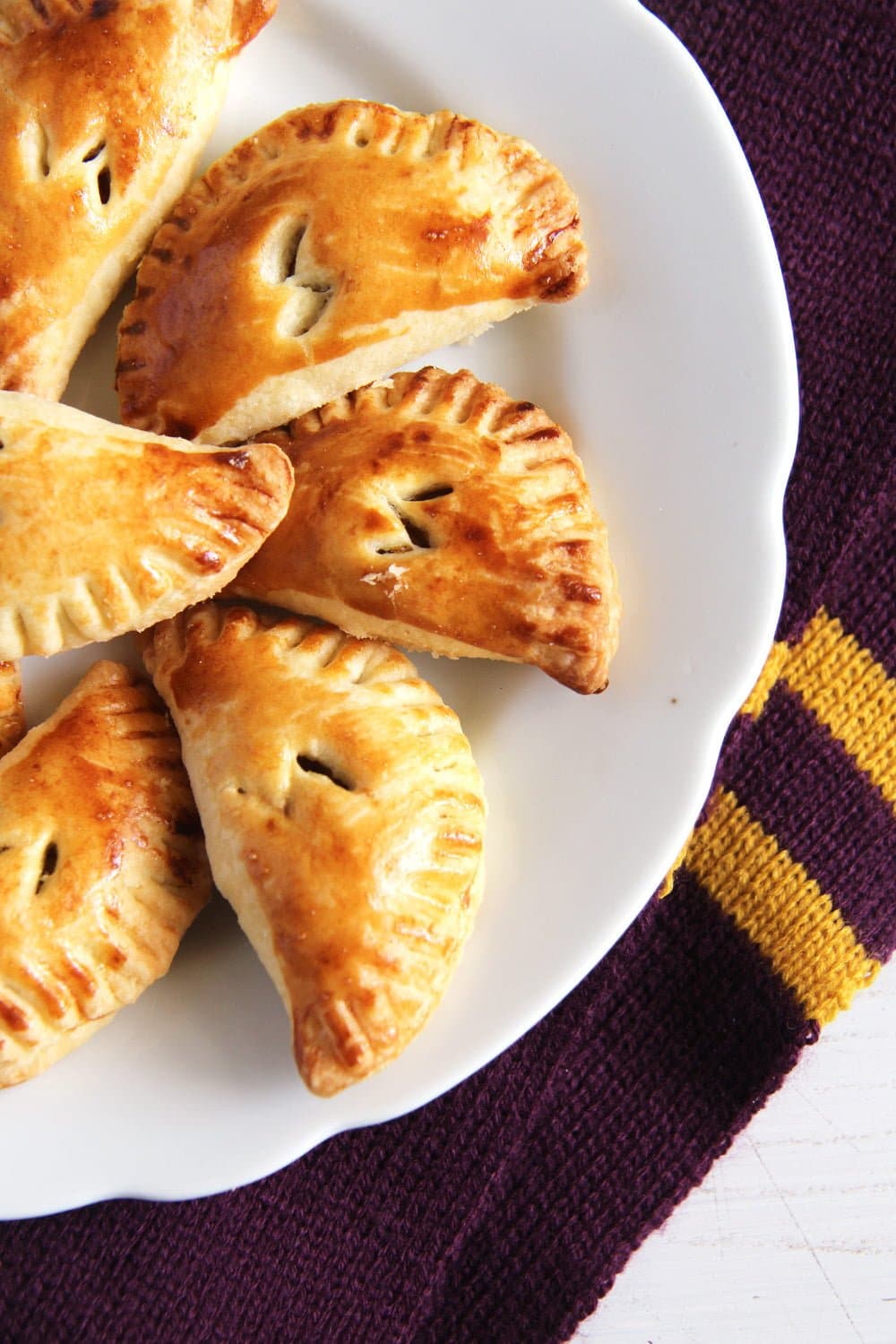 One of the most famous recipes from the Harry Potter world: pumpkin pasties with a sweet filling, which the young wizards can buy in the train on their way to Hogwarts. 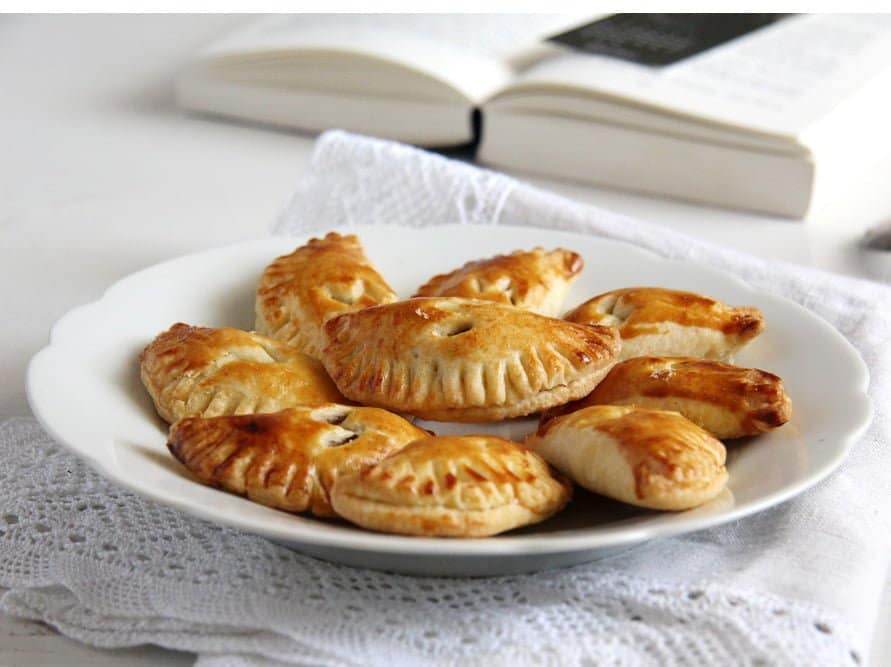 I am a huuuuuuuuuuuuuuuuuuge Harry Potter fan. I have been reading the books since I was about 18 or 19, every year, all the books, in the order of their appearance.

Normally I do that about this time of the year, this year I was a bit early though… I just felt the need to do it sometimes in the summer. But as I am currently reading the books to my kids as well, I still get to sink into Harry’s world almost every day for a while. We just finished The Goblet Of Fire

tonight. The first time I read the books in German as well, so it really never gets boring. 🙂

? I cannot even begin to count how many times I’ve seen them… I remember the first one that came out, I think I went to the cinema at least 5 times…

All the others I have only seen once in the cinema, but of course I have them all at home and I watch them every time they are on TV as well. And they are on TV at least twice a year and again always around this time of the year.

My husband never read the books himself, except what he is now reading to the kids, but he is a Harry Potter movie expert as well, he has to watch with me every time they are on TV. He knows resistance is useless, he can either watch that or go to bed early… 🙂 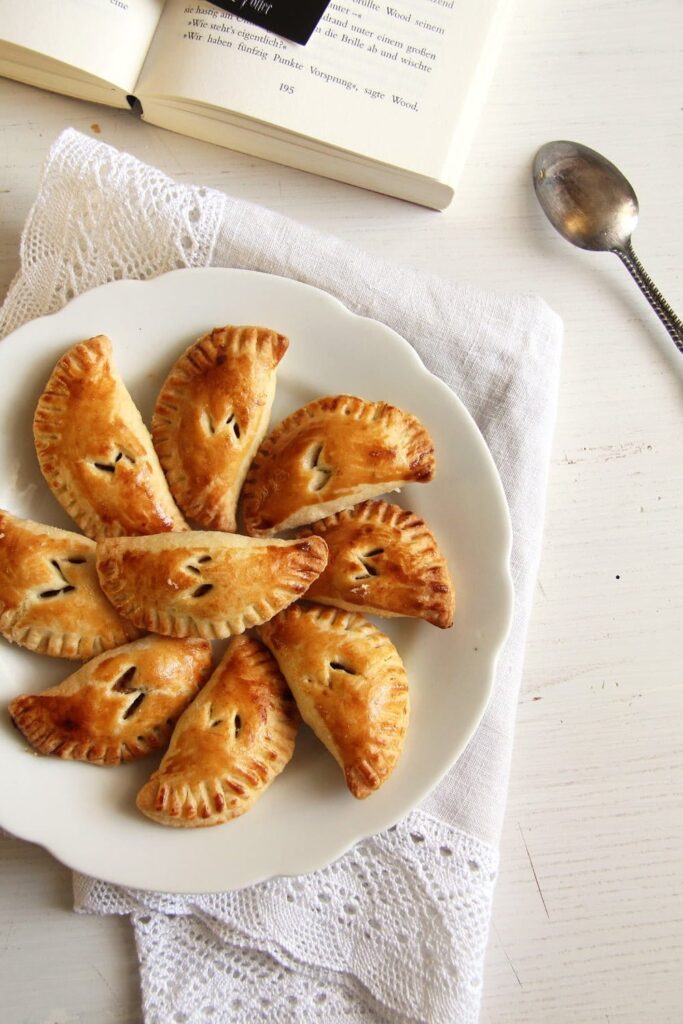 . OK, I admit, it is not a pure Harry Potter movie, everything takes place before Harry Potter and Voldemort’s time and I guess there is no Hogwarts to be seen either, but it is as close as it gets.

We already booked the tickets for Friday afternoon (our wedding anniversary as well) and we will see the movie together with the kids. We are all really really excited about it, my Bruno and I particularly, he is infected with the Potter virus as well.

So I thought that the release of this film would be a nice occasion for me to start a Where Is My Spoon Series featuring Harry Potter recipes. There are so many of them mentioned throughout the books that I found it really difficult to choose. Everybody has heard of the famous butterbeer and the pumpkin juice, of the all-flavored beans and the chocolate frogs.

Well, I find that making chocolate frogs or flavored beans at home is close to impossible, I cannot imagine liking pumpkin juice (I am not a juice person generally and pumpkin sounds worst than apple… ) and I got to taste butterbeer at the Harry Potter Studio Tour in London and, sadly, I didn’t like it much. It was OK, but it wasn’t something I’d want to make at home. The best part of it was the cup it was served in and which we could buy as well. 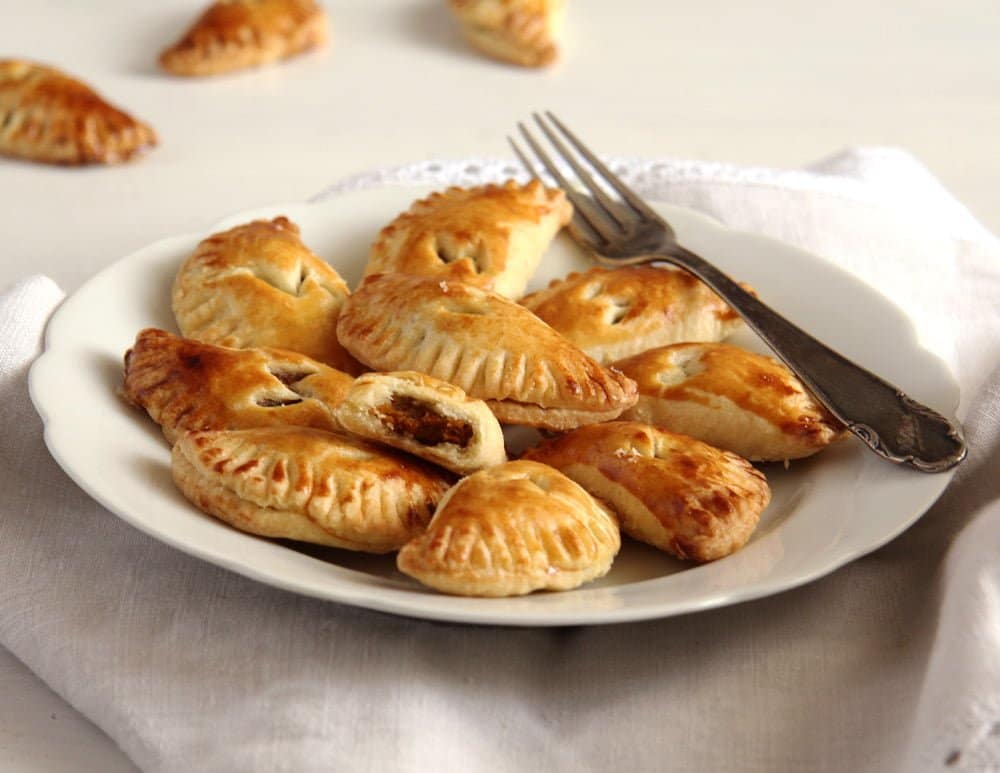 WHAT ARE PUMPKIN PASTIES?

I am starting with the pastry that the Harry Potter books made famous: the pumpkin pasties. They are the first typical wizard food that Harry gets to eat when on his way to Hogwarts in the Hogwarts Express.

The pumpkin pasties are small pastry pockets filled with a delicious sweet and spicy pumpkin filling, having a lot in common with the Cornish pastries which you can buy just about anywhere in England, but which are normally savory.

I decided to go for sweet version because that is the way I imagined the pasties to be from the very beginning. The Hogwarts Express trolley only sells sweets, so I have always taken it for granted that the pasties are sweet as well.

THE PASTRY FOR PUMPKIN PASTIES

To make the pastry I used a recipe found at Serious Eats – Easy Pie Dough , I made it for the first time a couple of months ago and found it so good, I am using it quite a lot lately, almost every time I make pastry that needs to be nicely rolled.

I like the taste and the consistency very much, but what makes this recipe special is that the pastry dough is so easy to roll. That was always a major thing with the pastry I’ve made before, it was not so easily rolled, so I mostly just pressed it on the baking dish. But with this particular dough, you will have no problems at all, it works like magic! 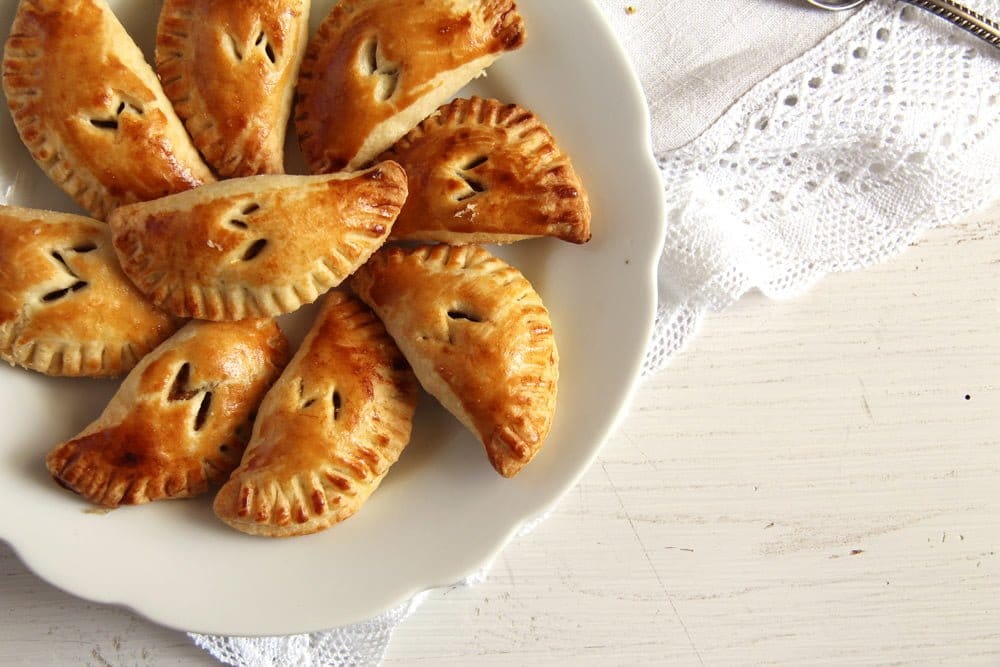 CAN I USE READY-BOUGHT PASTRY?

If you don’t want to make the pastry (although it is really so quick and easy and tastes so good), you can always take ready-made shortcrust pastry, it is your decision.

I made a large batch of pastry, but used only about the half for the pumpkin pastry, I weighed it, there were about 200 g/ 7 oz necessary for about 15 small pasties.

CAN I FREEZE SHORTCRUST PASTRY?

You could either make the pasties larger or make more of them or use the rest of the pastry for a pie for instance. If not, the pastry will keep in the fridge for a couple of days and for months and months if frozen. I do that often with shortcrust pastry, make a large batch and freeze the leftovers for later use.

You will need some pumpkin puree to make the filling.

I halved, seeded and roasted a very small pumpkin, but still I had way too much puree. I made the filling out of only a small portion of it and used the rest to make pumpkin macaroni and cheese – so good!

You could use the remaining puree to make some pumpkin pancakes or pumpkin smoothies or my pumpkin turkey curry. Or make a soup.

You could use pumpkin puree from a can as well (not pumpkin pie filling), at least I have read that, canned pumpkin puree is not available in Germany. 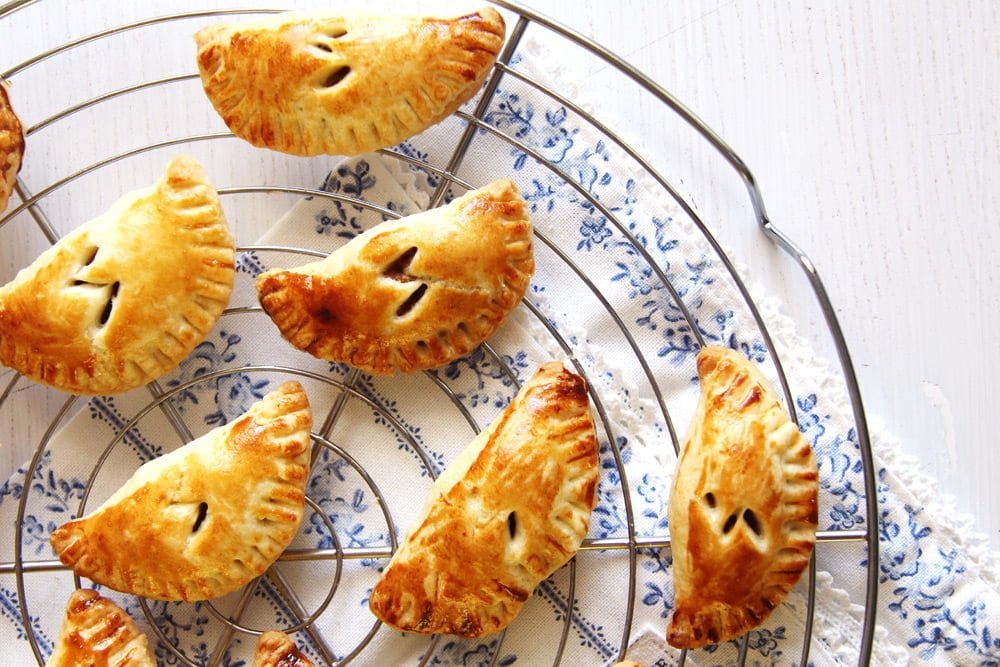 How to Increase Traffic with Yummly

I love the idea of making the recipes from the books. Your pumpkin pasties look fab. x

Such a fun and tasty idea! These little pumpkin treats look perfect, you’ll have to bring some for the movie 🙂 I can’t wait to see the other Harry Potter dishes you’ve come up with. Happy Anniversary!

Interesting pasties… filled with 2 of my fave ingredients, pumpkin and cardamom. They look divine!!!!

How fun that you can share these books with your kids! That is such a great way to promote the love of reading with them. These pumpkin pasties look like the perfect snack to nibble on while reading the books!

I love this recipe! I tried it for the first time today and it was delicious. I added a few of my own touches (an extra dash of cinnamon and a sprinkle of sugar on top with a dash of maple syrup in the batter) and it was still really amazing. The directions are perfect and the measurements are spot on as well. Thank you!

Thank you, Nima. It is so great to have such positive feedback, especially regarding the directions and measurements.

Hello! What kind of pumpkin (fresh not canned) would be best for this recipe?

Hi Venni. I am a fan of Hokkaido pumpkin, also called red kuri squash, I use that for almost all my pumpkin recipes, it tastes amazing and you don’t have to peel it. Butternut squash would also be great, but you have to peel that. Otherwise, make sure you choose a pumpkin or squash that is really flavorful, not the Halloween kind of pumpkin, they have no taste.

Just found this online when looking for harry potter recipes. My oldest just turned 8 so we are starting with the 1st book in the series via audiobook as a family. I am SUPER excited about finally sharing this book with him. I don’t know if we’ll be able to watch the movie with him – he gets scared easily but I am going to give it a try. So far he loves the weasley twins and laughed several times through the first few chapters. Keeping my fingers crossed and we’ll try these… love all the spices reminds me of pumpkin pie. Perfect for fall. Love your pictures. They are so good they were making me hungry lol. Do you have a fav character? 🙂 My husband thinks Hermonie is whiny. I think she’s brilliant just slightly annoying during the first book as she’s so young and it shows. P.S. LOVE the idea of adding maple 🙂

Hi Stephanie,
We have just finished reading all the books with the kids (9 and 6) and they were allowed to see all the movies too, but each one only after we finished reading the book, so that they already knew what was going to happen. Everything went well, no nightmares or anything. 🙂 I think you should be safe with at least the first two of the movies, especially after reading the books. I don’t think I have a favorite character, I just love them all. 🙂

Once you make these, do they freeze well? Or do they break up and aren’t good coming out of the freezer and warmed up? I’m asking if this would be something good to do for a wedding, but need that extra time to work on them, so hoping freezing is an option.

Hi Norma. I have never frozen these particular pasties myself, but usually freezing unbaked pasties should be ok. Freeze them on a baking tray and transfer them to freezer bags once they are solid. Bake them directly from frozen and increase the baking time a little. Check to make sure that they are baked through by cutting one in the middle.

Hi Julie. You need a total of 1 1/4 cups. To get 2/3 out of that amount, just mentally divide the amount in 3 parts and use 2 of these parts. you don’t have to measure exactly, approximate with your eyes.