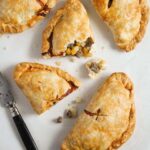 You won’t believe how good the recipe for these Cornish pasties is! That flaky pastry, slightly crispy and crumbly around the edges, the tender beef pieces, the touch of sweetness from the rutabaga, and those comforting potatoes.

A perfect meat pie that I could eat at any time of the day, preferably warm, but really I don’t mind it if it’s cold either… That good!

I can remember the first Cornish pasty I had in Bath, quite a long time ago, that hot pocket of pastry with vegetables and meat, I loved it! And because my husband and I wanted to try something different as well, we bought and split a second super spicy Indian style pasty with potatoes and vegetables and lots of curry. So good!!!

And if you would like to try some sweet pasties, have a look at these pumpkin pasties.

What are Cornish pasties?

The Cornish pasties have a long history. They originate in Cornwall – Great Britain and the story says that they used to be a kind of food enjoyed by miners. As they were unable to come to the surface for lunch, they would carry these filled pasties, which would allow them to have a hearty meal even under the ground.

Apparently, the thicker crimped edge of the shell was also there to protect the filling from getting touched by the miners’ dirty hands and thus to prevent contamination and poisoning with arsenic. The miners would only touch the crimped edge of the pastry, which was discarded after eating the rest.

Beef was scarce during those days and although the original Cornish pasty includes beef, many times the pasties were filled only with vegetables: onions, rutabaga/swede, and potatoes. Some would include carrots, but generally, carrots were regarded as the mark of an inferior pasty.

What do you need for this pasty recipe? 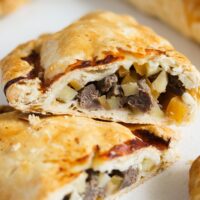 I'm a cornishman born and bred as be all me familly a little bit bout the knockers Miners wives were said to mark their husbands’ Cornish pasties with their initials. Not only was this for ease of identification, it was also so that when the crust was discarded, the Knockers would know which miner had given them the food. Why would a miner want to be identified by these sprites? They had a reputation for causing mischief and bringing misfortune, so staying on their good side was seen as highly beneficial. In fact, missing tools were often blamed on Knockers and woe betide any miner that took to whistling a tune, the sprites had an intense dislike of the sound. However, the presence of Knockers was taken to be a good sign, for if they worked in a mine, it was seen to be safe from collapse. It was also said that their knocking could lead a miner to rich seams of ore, and so the relationship between the faery and mining folk in the distant past was one of mutual benefit. These days, it’s the seagulls that are likely to take any discarded crusts, the Knockers left to their own devices in the darkness of the mines, where the groaning of their bellies has likely been added to the sounds of their activity

They look authentic and so good :-)