Fish in tomato sauce, a quick and simple white fish fillet recipe made in one pan.

Now that summer is over (not that we had much summer this year anyway) there is a new series starting on Where is My Spoon. This time I will dedicate the next two weeks to recipes from another part of Romania, from Dobrogea or Dobruja – the territory found in the South-East of the country at the Black Sea.

Dobrogea is an historical region divided in the 19th century between Romania and Bulgaria and the Romanian part of it comprises the Danube Delta, which must be one of the most beautiful places I have seen in my life.

As a child, my grandparents and I used to go for holiday to the seaside, always Mamaia, every summer. Later on, after the fall of communism when the money my grandmother was earning lost most of their value, we stopped going, but those years of constant seaside holiday did leave an imprint on my brain.

There is nothing that makes me happier (in terms of nature and scenery) than the sea and the smell of the sea is the best smell in the world, if you ask me.

I did not get to see the Black Sea often in my adult life, I left Romania many years ago and my husband and I only visited Constanta, the largest city in the region, once. 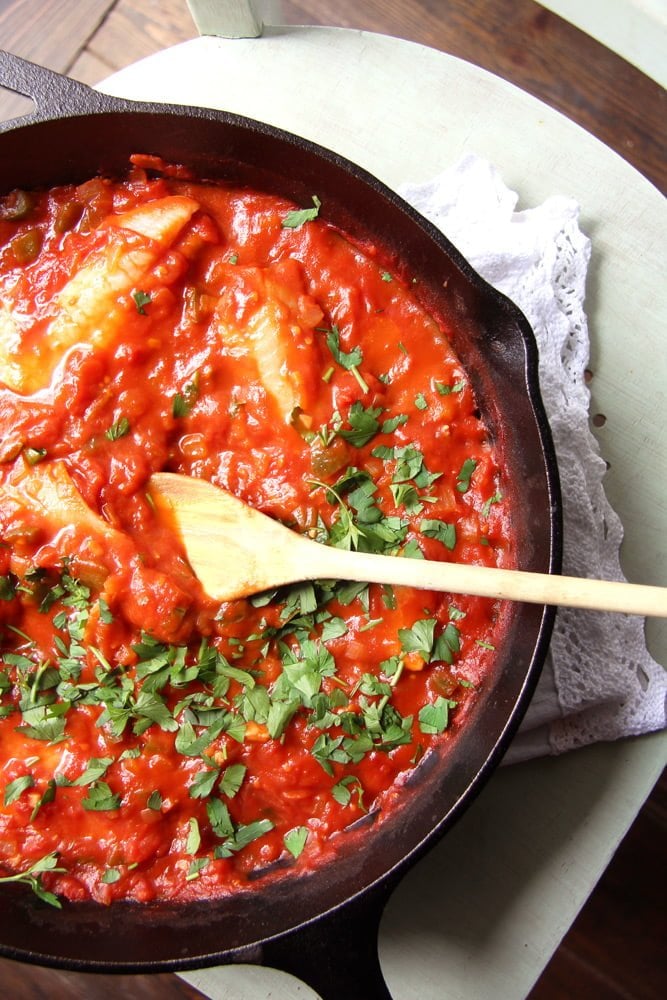 From there we went to the Danube Delta, a very aleatory decision, which proved to be the best we made that summer. We actually only wanted to take a boat and visit Sulina, a port town found at the mouth of one of the branches of the Danube.

While waiting for the boat we were approached by a man asking us if we wouldn’t like to visit a small village in the Delta called Mila 23. He told us that his friend was renting rooms in his house and we would be more than welcomed, if we wanted to spend a few days there.

I was quite apprehensive and I would not have done it without my husband. He, however, a more adventurous spirit, convinced me to give it a try and so we did.

We hopped on a small motor boat and drove for a while through the Danube channels until we got to this place where we could see a long hedge on one side of the channel. We got out of the boat, passed the hedge through a small opening and got on a small sandy road about half a meter wide, facing another hedge.

Another opening and there it was, one of the most idyllic little villages I have seen in my life, a village with small houses, lots of flowers, lots of weeds, chickens and cats, dust and hot air. It was amazing!

We actually only wanted to spend one night there, but we ended up staying for four days.

I cannot even begin to tell you about the trips we took through the narrow Danube channels, all the trees growing on the sides of the channels and over the water forming some kind of green tunnels, the pelicans and all the other birds we didn’t know by name.

And those water lilies everywhere. We watched the sunset on the water and, during the next days, we ate fresh fried fish with garlic sauce and polenta cooked by the mother of the house owner and vegetable rice cooked by the owner of another boat that took us around the channels, we drank cold beer in the local pub, we walked through the hot narrow paths around the village and so on.

We were even so lucky not to have any troubles at all with mosquitoes, which can become quite a challenge there, it was too hot all the time (about 40 degrees Celsius/ 104 degrees Fahrenheit), or so the locals said, too hot for the mosquitoes as well.

To remember and better know that region (from a culinary point of view) I decided to cook some of the dishes I recall eating there and some others that I know are quite common for the region, things I did not get to eat in my grandmother’s house. I hope you will like them. 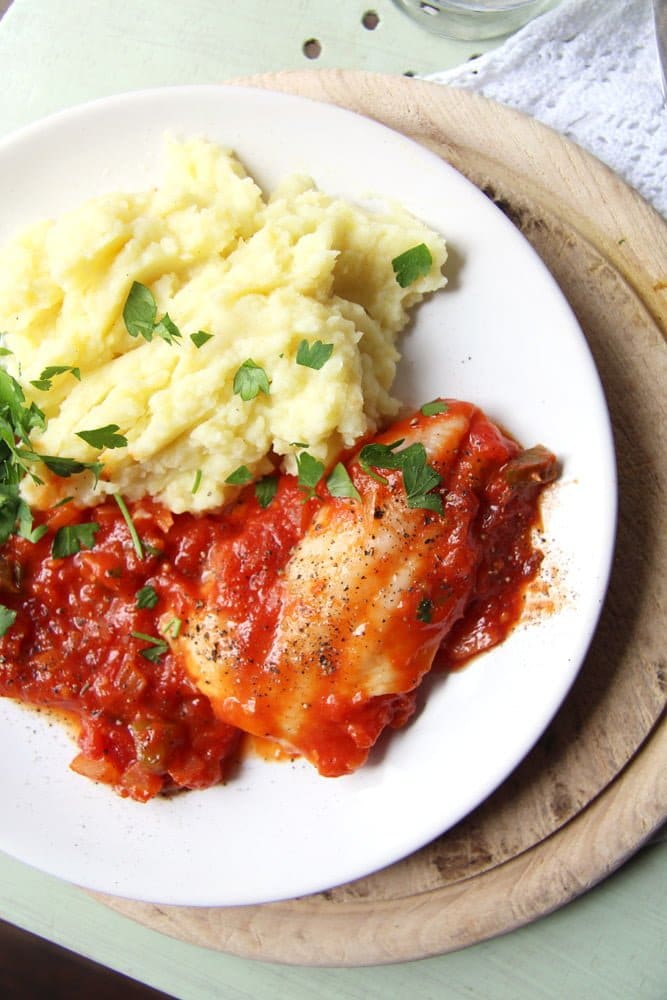 I will start with one of the easiest yet one of the best fish dishes I have ever made: simple white fish fillet in tomato sauce. Just a few and good quality ingredients and you will have a meal that you will probably end up cooking on repeat for a long time. At least I did.

INGREDIENTS FOR FISH IN TOMATO SAUCE 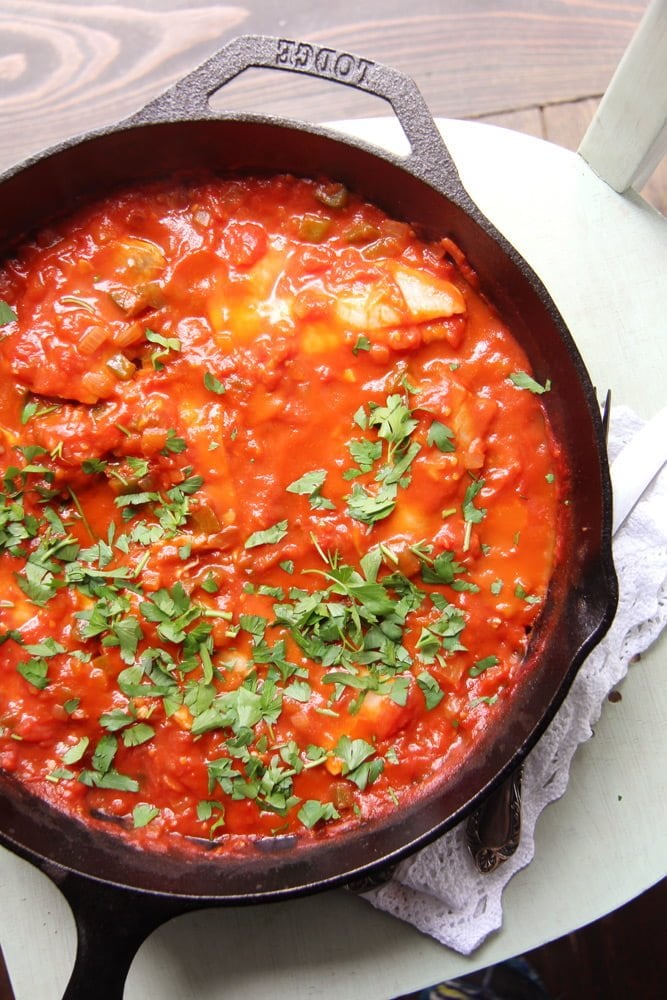 HOW TO COOK FISH IN TOMATO SAUCE

This recipe for white fish fillet in tomato sauce is one of the simplest ways of cooking fish. Actually, the only thing you have to keep in mind is to not overcook the fish. A few minutes will be enough.

Notes on the pan:

HOW TO SERVE FISH WITH TOMATO SAUCE?

Our favorite side dish for the white fish fillet in tomato sauce is mashed potatoes. Alternatively, you can serve rice or pasta or just some slices of crusty sourdough bread or French baguette. 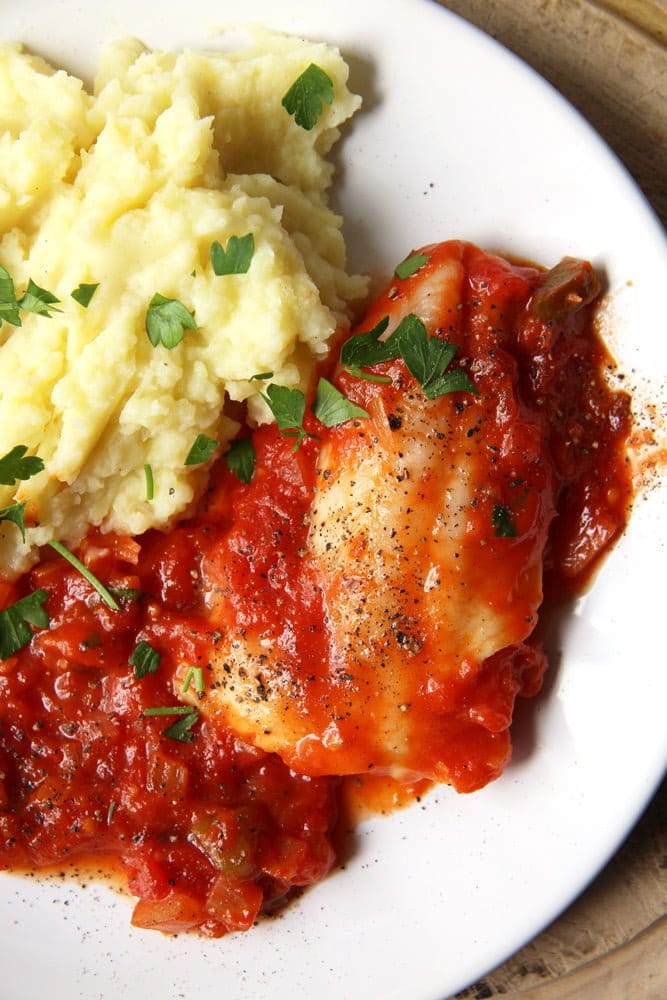 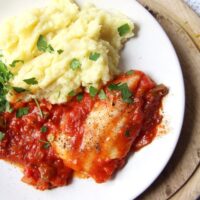 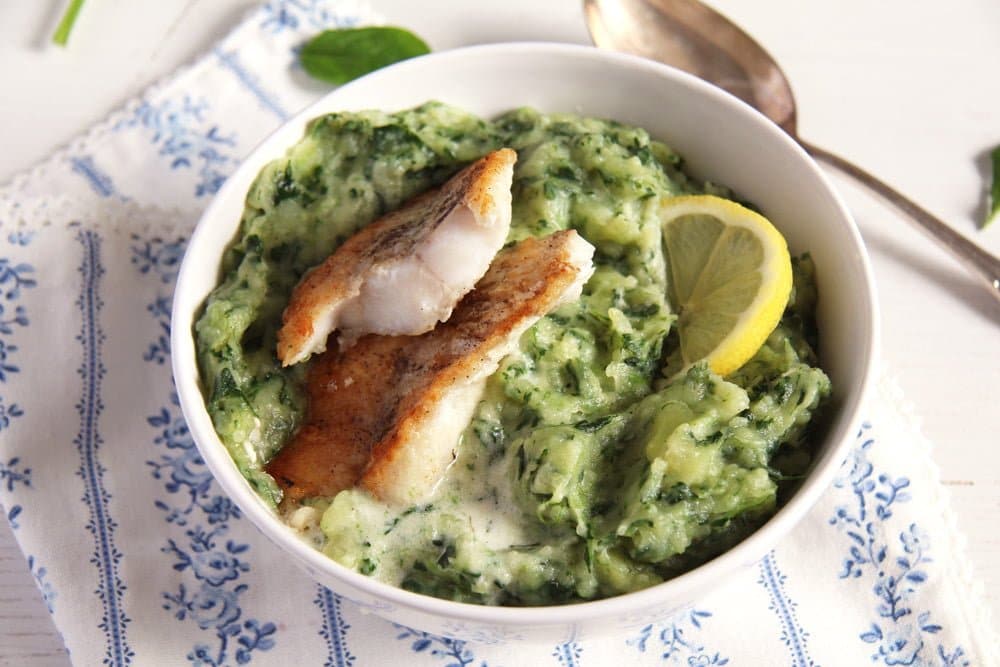 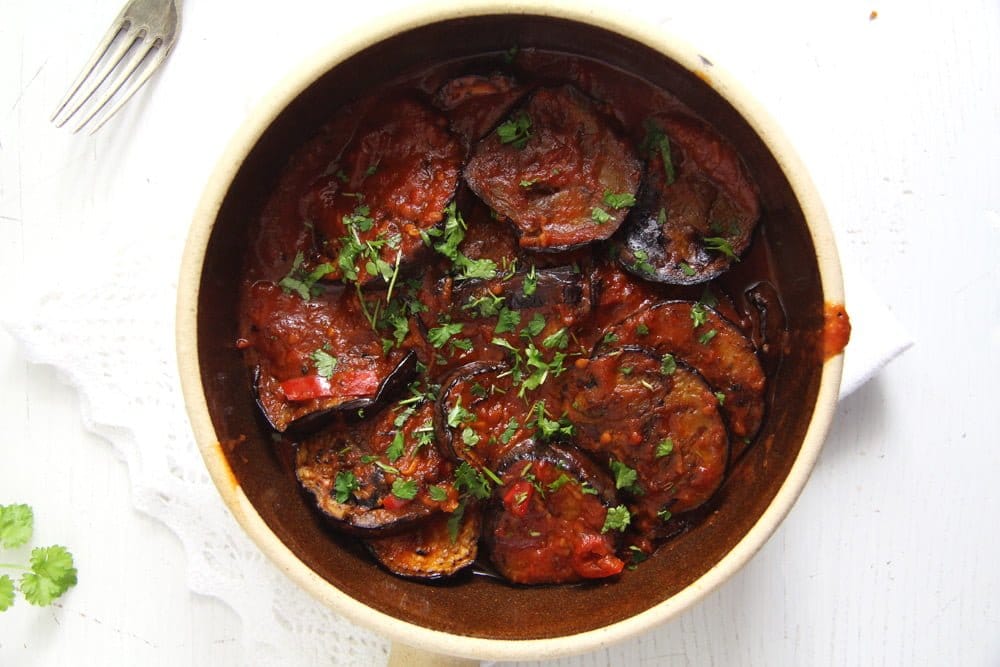 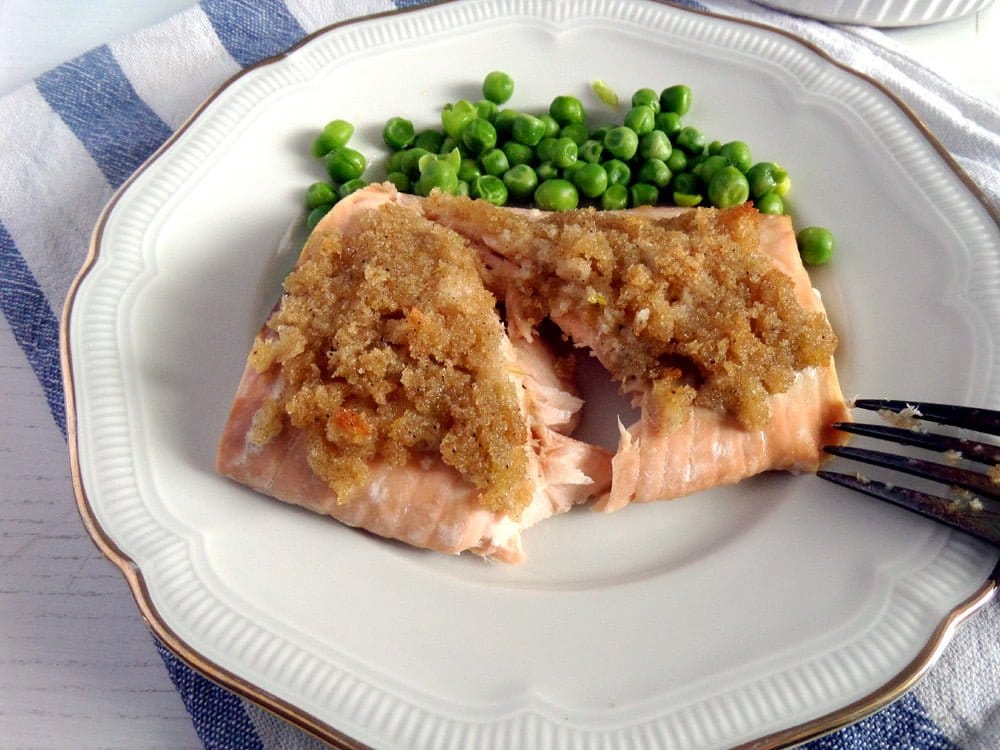 This dish is so yummy, Adina! I will definitely give it a try!

I love the simplicity and wonderful flavor of this dish. Good enough for company but easy enough for a busy day dinner. I have made it with Pike and Ling Cod. Both were excellent. Thank you!

This is such a hearty fall recipe thats simple to make and quite versatile as well. Perfect for the entire family. Thanks for sharing this.

It sounds like an idyllic time and this is a delicious way to relive it! I love how easy this is!

Thanks for sharing your holiday memories! I am actually relieved the warmer days have come.... this summer has been the hottest in my whole life, I think. Over 30°C in shade for so many days.... Your fish looks delicious and makes me want to try a fish in tomato sauce (I don't think I've ever had fish this way). The only time I made a tomato sauce in my beloved De Buyer pan (iron), the whole seasoning I had developed in a year or more simply disappeared and I had to repeat it several times to be able to fry anything in this pan... After this experience I never put tomato sauce in my Lodge pans. I think it depends how much time you let the tomato sauce simmer in a pan, but I prefer to play safe now! I cook tomato sauces in inox pans.

What an amazing adventure! You are lucky to have found such a spot. This fish looks wonderful. We eat a lot of fish, but I've never had fish with a tomato sauce. It looks very comforting and I will need to give it a try!