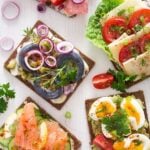 These Danish open-faced sandwiches, or Smørrebrød, are probably the best sandwiches you will ever eat; easy to put together yet impressive in appearance, so versatile, and incredibly delicious.

Basically, bread with butter, smør meaning butter, and brød bread in Danish. But it doesn’t stop there; just bread smeared with butter would be rather boring. I do love my buttered bread, but I do like it better with something on top. And the things you can top your open-faced Danish sandwiches with… it really is a never-ending story.

So, the smørrebrød is a piece of thin and dark rye bread, buttered and garnished with an amazing array of delicious ingredients.

Smørrebrød is probably the best-known food item when it comes to Danish food; for me, at least, they are the first thing I think of when speaking about Danish food. There are, of course, the Havarti, Danablu or Esrom cheese, the pickled herring, or the liver paté, but otherwise, I cannot spontaneously think of many other Danish foods.

And if you like open sandwiches, have a look at the Smoked Salmon Sandwich, the Eggs and Asparagus on Toast, the Pork Belly Sandwich, or the Poached Eggs and Tomatoes Sourdough Toast.

It seems that the story of the smørrebrød begins in the Middle Ages. Field workers would pack their lunch for the next working day, already in the evening. The lunch consisted of leftovers from the previous meals, which would be piled on a so-called “trencher”, which was a piece of stale bread.

The peasants would eat the topping and discard the trencher, but in time they discovered that the juices soaking the bread also made it taste better, so they began eating the trencher as well.

Then, during the 19th century, smørrebrød became a popular lunch among factory workers who were eating their lunch away from home. The idea was pretty much the same one, piling a bunch of leftovers on top of a slice of rye bread and thus creating a filling lunch that would keep them satisfied until the evening.

Rules of eating a smørrebrød

Funnily enough, there are rules regarding the proper way of eating smørrebrød. I mean, you would think it is just a sandwich. Do I need someone to tell me how to eat a sandwich? But the rules are not quite as unnecessary as they may seem.

How to make smørrebrød? 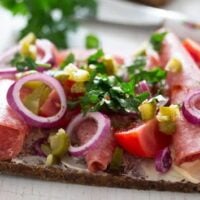 Choose dense whole grain rye bread. If you cannot find it, use pumpernickel instead. Do not use regular soft sandwich bread.

Thank you for your suggestions. I will make them for my German husband in Thailand. We visited Copenhagen a few years ago We love to eat Smoerrebroed accompanied by Akvavit.

Hi Montatip. Thank you for the feedback, I am happy you liked the sandwiches.

I grew up in a Danish and Norwegian home. I remember a house full of company for over thee holidays, especially christmas eve. Bow I want to serve a Smorgasbord for friends and family near Christmas like the ones we had so long ago. These recipes will be perfect along with my mother's fruit soup and Danish butter cookies and a few other things, maybe some hot glug for good measure. It all brings back some wonderful memories of over 75 years ago.

Doris, it is so nice to read your comment. Thank you very much. I wish you and your family a wonderful Christmas!

Thank you for the lovely photos and recipes. I have had some wonderful open faced sandwiches in Sweden and Norway. I have a group of Finnish visitors coming this weekend for a poolside lunch, and I was looking for some sandwich ideas. These look perfect. Thank you.

Thank you, Laura. Have a great time at the weekend, a poolside lunch sounds so exotic, nobody around here has a pool. :) Way too cold for it!

I wonder how you find all these recipes from all over the world. Even you know zapiekanka from Poland ;)

I was thinking of making zapiekanka for this football food series. :) Polish recipe for baguettes with mushrooms, apparently quite popular in Poland.