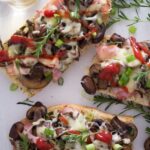 Some kind of pizza sandwich or Polish zapiekanka: deliciously crunchy baguette halves topped with whatever you like.

Another Polish recipe for you again today, I have quite a few of them on the blog, for instance, the Bezowy Cake, one of the best cakes I have ever eaten. The Bigos Stew or the Polish Kasha, which is roasted buckwheat with mushrooms and onions.

Zapiekanka is a popular Polish street food consisting of half a baguette, topped with fried mushrooms and cheese, toasted in the oven until the cheese melts. Afterward, you squeeze some ketchup on it and there you have it, some kind of pizza sandwich, hot and delicious!

Zapiekanka appeared for the first time on the streets of Poland in the 1970’s, but it became really common at the end of the 1980’s when the communist laws regarding private enterprise started to loosen in the country.

This lead to the spread of food trucks selling zapiekanki, French fries, sausages or rotisserie chicken.

There are many varieties of zapiekanka. It started with the mushrooms and the cheese, but people kept adding stuff to it to make it more interesting.

Other versions of the so called “Polish pizza” include “diablo” with hot sauce, bacon and pickled cucumbers, “Greek” with feta and olives, “Gypsy” with sweet and sour sauce or “Hawaiian” with pineapple and barbecue sauce. (Wikipedia)

How to make at home?

Enjoy with some thinly sliced scallions and ketchup on top. Or Sriracha sauce in my case, because I like things a bit hotter and I really cannot stand ketchup.

The zapiekanka sandwiches can be assembled ahead, covered with cling film and refrigerated until ready to bake. 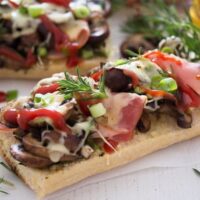 I bet this will go down a treat for me. My kids will love this too if I take out the mushrooms ha..ha.. what's wrong with these kids :) I love mushrooms!

I was looking for something for our lunch tomorrow and here it is. I have all of the ingredients so it obviously was meant to be. Thanks for another recipe idea!

I like both ketchup and Sriracha. I'll probably use both on this for good measure :) This looks delicious, Adina!

I haven't been to Poland for many years and haven't heard about all these variations of zapiekanka! I only know the mushroom and mushroom+ham one! Your zapiekanki look fabulous! I also make them quite often when I want something warm, but quick, though they never look even half as good as yours! (By the way, mine are fantastic with the Indian sauce I've recently posted! I forget how often I use it!).

Looks amazing! I love this kind of pizzas. Today I've had pizza for breakfast, a naan-pizza, made pretty much the same, but without the mushrooms.

I remember the milk-pizza, not my favourite. :)) I fully agree with your description. My mother used to make another pizza with a thick crepe mix, I liked that a lot. She made the Italian style pizza too, as she had it in Italy, when she went there as a teenager.

The milk and egg pizza, I haven't thought about it in a long time and now I was considering if I should make it someday. But I am not sure if anybody except me would eat it... :)