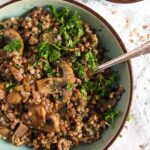 Roasted buckwheat with mushrooms – a delicious Polish recipe for kasha with onions and lots of herbs.

After one year entirely dedicated to Romanian food, I am starting another Eastern Europe recipes short series today. This time I will show you some wonderful Polish recipes.

Why Poland? Well, we spent a week in Poland during the kids’ autumn holidays at the beginning of October last year and I liked the food soooo much, I just had to try to recreate some or better said almost all of the delicious dishes we had there, at home.

And because there were quite a few of them I wanted to cook myself, I decided to make a blog series out of it. Maybe you would like to try these delicious and super easy to make puff pastry croissants filled with jam, these Polish meatballs, or this amazing Bezowy or meringue cakes, which is one of the best cakes ever.

I am starting with this roasted buckwheat recipe or kasha because this is a dish we had for breakfast in the hotel a couple of times. It would have never occurred to me to serve such a dish for breakfast, but there it was: a rather dark (almost black) heap of nondescript something with bits of mushrooms and onions in it, in the middle of all the other breakfast foods.

Despite the looks, this kasha with mushrooms and onions was the best tasting dish we had in Poland. And that is saying a lot, considering that all the food we had there was delicious!

Kasha is a porridge made from buckwheat or other grains, like wheat, pearl barley, or semolina, for instance. In the US, when referring to kasha people mean porridge made with buckwheat groats, but otherwise (in Eastern Europe), there are lots of types of kasha.

Kasha actually means “groats” and not buckwheat, like I used to think.

Why toast buckwheat with eggs?

Did you buy a bag of roasted buckwheat to make kasha with mushrooms and onions? And you don’t know what to cook with the rest of it?

Buckwheat Bread – made with the flour 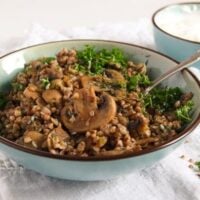 Roasted buckwheat has a darker color than raw buckwheat. You will be able to buy it roasted most of the time, especially if buying it in a Russian store.

In the beginning, after soaking the buckwheat in egg... do you add the whole egg to the pan or just the soaked buckwheat?

I love buckwheat kasza and yours looks delicious. One thing I do, to keep it all to one pot, is to cook the onion and mushrooms in a deep saucepan and remove them when they are done. I then toast the buckwheat and egg in the same pan, add some broth, cover and cook the buckwheat. When the buckwheat has absorbed all the liquid, simply stir in the onions, mushrooms an herbs. The steaming buckwheat will heat them right up. Dzięki!

Sounds great! Thank you for the feedback.

In my search for "authentic" Polish recipes, I came upon one that, through translation, seemed rather vague. As I dove into further, I was pleasantly surprised to discover that the starch for the recipe was buckwheat groats. The recipe? Gołąbki - or as many of you know them, cabbage rolls. In many of today's recipes, they call for rice to be mixed with the meat. BUT, rice was something you would probably NOT find in a Polish kitchen in the 18th and 19th centuries. To add to my surprise, the cabbage leaves used were NOT taken from a head that has been boiled. Fuel for cooking was something that needed to be conserved, so it would NOT be "wasted" just to boil water. The cabbage leaves were taken from whole PICKLED heads of cabbage. When you think about it, why not let some water and salt passively take care of preparing the cabbage. Well, after waiting the 2 months for the cabbage to pickle, I prepared my tray of gołąbki, using that and a buckwheat/meat filling.

WOW! A TOTALLY different, yet intriguing taste. The simple task of pickled cabbage gave these "little pigeons" a tartness that was easily tempered by the the depth of flavor brought around by the buckwheat.

I don't use non-stick pans, so for fat I was lucky enough to have duck fat in the fridge. That gives everything an extra richness! I put meatballs and sauce on the side of this lovely dish, and rounded it out with boiled beats (that's pretty authentic, right?). Very tasty dish.

Thank you for your feedback, Jenny, I am so glad you liked it! :)

Just made this today. Its delicious. Love the ideas above of capers or adding a poached egg.

So happy to hear it, Debbie. Thanks for the feedback.