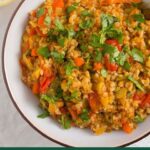 Healthy, vegetarian or vegan buckwheat or kasha recipe with lots of vegetables.

I’ve been very much into buckwheat lately. Most of the time in a buckwheat soup, but often enough as a kind of quick stir-fry like today’s vegetarian or vegan buckwheat recipe, as buckwheat porridge for breakfast (sweet), or bread.

Love it, no matter how it’s cooked. And the best part about it is that my children eat it as well, despite it being such a new discovery and so different from the usual rice, for instance.

I discovered it during our holiday in Poland about one and a half years ago and I have been hooked ever since. We had it for breakfast there, a savory kasha dish, which was so very unsightly yet so delicious. I bought a packet of it in Poland and cooked my first kasha with mushrooms and onions shortly after being back home.

Despite the misleading name buck-wheat, it is not a grain and it is not related to wheat. Like quinoa or amaranth, it belongs to a group of food called pseudocereals, meaning that these seeds are consumed just like cereal grains, but do not grow on grasses. Its grains are actually the seeds of a flowering plant, which is related to rhubarb and sorrel.

Buckwheat is considered an ancient grain as it has been cultivated for over 8000 years. Apparently, it was a very common crop all over the world until the introduction of nitrogen fertilizer during the 20th century helped increase the production of corn and wheat.

As it is not technically a grain, but a seed, it is naturally gluten-free. It can be processed into flour or noodles and that makes it a great choice for people suffering from celiac disease.

It is a common dish in Eastern Europe, but mostly in Poland, Russia and Ukraine. I am from Romania, so Eastern Europe as well, but I have never seen kasha or buckwheat in Romania. I knew the name, mostly from books, but never seen it or eat it there. Apparently, kasha is one of the oldest known dishes in the Eastern European region, at least 1,000 years old.

How to cook buckwheat or kasha?

Cooking the groats or kasha is not difficult, but you do have to pay attention to how long you cook it and how much water you use. Kasha should not turn completely soft and mushy.

I don’t mind if the groats are slightly overcooked when making a soup, I feel that makes the soup more comforting and appealing to me, but when making another kind of recipe, I prefer to be able to bite on them, instead of eating them overcooked and watery.

How long should you cook buckwheat?

How to cook buckwheat with vegetables?

The buckwheat and the vegetables are cooked separately, which makes the roasted buckwheat recipe a good one for people who are cooking with buckwheat for the first time. By cooking them in separate pots, you can make sure that you do not overcook the groats, while you wait for the veggies to be cooked.

How to serve vegan kasha?

You can serve it as it is and keep it vegan this way. However, if you are not looking for a totally vegan meal, I recommend serving the kasha and vegetables with a yogurt and carrot sauce. Or use dairy-free yogurt and maple syrup to make the dip.

To make the carrot and yogurt sauce, mix 2 medium grated carrots with 250 g/ 1 cup creamy yogurt (Greek yogurt or dairy-free yogurt). Stir and add the juice of ½ lemon, about 1 ½ teaspoon of maple syrup/runny honey, some dried mint and sea salt, and salt and pepper to taste. Stir again and add 2-3 tablespoons of nut milk, if not runny enough. 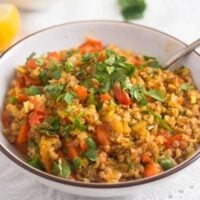 Easy to make and delicious. I served it with broccoli on the side

My husband loved this recipe. Thank you

Thank you for the feedback, Ella.

awasome! i ve found parboiled buckwheat Grechka www.grechka.co.uk This is real Russian buckwheat, not polish or chinese tastes much better

This states it is vegan: the uses of Greek yogurt and honey mean it clearly isn’t. Please change to dairy free yogurt and agave or maple syrup

Hi Helen. The dish itself is vegan, only the serving suggestion is not. But you're right, I will change that to make it clearer.