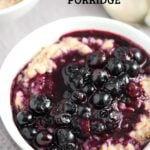 Start the day with a healthy buckwheat porridge with berries or fruit, a delicious alternative to the common oatmeal. An easy, gluten-free breakfast that will keep you full for hours.

Despite the name, buckwheat is not actually a grain and it doesn’t have anything to do with wheat. It is a so-called pseudocereal because its seeds can be used the same as cereals. It has been cultivated for many thousands of years and it is a staple ingredient in the Russian or Polish cuisines, for instance.

I’ve discovered buckwheat a few years ago. In the beginning, I’ve used the kernels or the buckwheat groats mostly for soups, but nowadays I make kasha, buckwheat salads, buckwheat bread or this buckwheat porridge for breakfast.

Buckwheat porridge tastes nutty and hearty even when eaten sweetened and with fruits or berries.

The roasting of the groats imparts a lot of flavor into the dish, making it heartier than regular oatmeal. It is also rather chewy and really satisfying to eat.

Despite the “wheat” in the name, buckwheat is not a cereal, so it is safe to eat when you are on a gluten-free diet.

The only thing that might cause buckwheat to not be safe is cross-contamination, which can happen when buckwheat is processed in the same facility as grains containing gluten. That is why you should always check that the groats you buy are labeled “gluten-free”.

Where can I buy buckwheat?

I usually find buckwheat groats stored together with the rice and grains. Buckwheat flour is mostly to be found in the flour section of the supermarket, together with regular flours.

If you cannot find it there, you might want to have a look in the gluten-free aisle or maybe the breakfast aisle together with other breakfast cereals.

Or you can check the international aisle, most supermarkets have one. If there is a Russian/Eastern European section there, you can be pretty sure that you will find buckwheat groats and buckwheat flour.

HOW TO PREPARE BUCKWHEAT PORRIDGE?

What to eat with buckwheat porridge?

Today’s buckwheat breakfast has two versions: you can try it with blueberry compote or with bananas. I love both versions!

Other versions or add-ons:

Can you reheat buckwheat?

SCRAMBLED EGGS ON TOAST – How to make scrambled eggs on toast, a high in protein, healthy and delicious breakfast.

HOMEMADE MUESLI MIX – How to mix your own muesli at home, without any oil or added sugar, just oats, dried fruit and lots of seeds. A super healthy, vegan, gluten-free recipe. 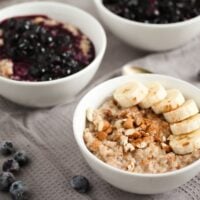 Is there any way to make this without using a blender? I don’t have one, and I’m really tempted to try it anyway since it looks so good. How could I replicate the texture otherwise?

Hi Liza. You can cook the porridge without blending it as well, but it will have a coarser texture. It will still taste the same. You might need to cook it for longer (taste to make sure) or add a bit more milk while it cooks if you notice that the buckwheat absorbed too much of it.

Hi Angela. Thank you for your comment. The email newsletter is sent every time I post something new. The recipes are all on the blog, you can search them in the Index, Search field or Recipes by ingredient. If you look down on the right side in a post, there is a small heart and other symbols. If you press that and introduce your email there, you will be able to save the recipes you might be interested in cooking later. Happy browsing! :)

We eat steel cuts a couple of times a week, but I see how this would be a nice little change for us. I've never had a buckwheat porridge, and it looks delicious. thanks for another great recipe Adina!