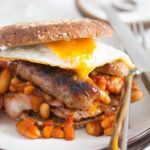 A traditional full English breakfast: a hearty way to begin the day with eggs, sausages, bacon, beans and tomatoes.

Something for the weekend. Or something to cure a hangover. This traditional English breakfast, also known as a fry-up, is probably the heartiest, most copious way of starting the day.

I remember the first time we had a proper, typical English breakfast. It was on one of our first weeks in the UK, many years ago, and although I knew so much about Britain, I must admit that the breakfast came as a big surprise.

Our typical breakfast would be some müsli with milk or bread with cheese or, when looking for something special, a toast with mushrooms and egg or tomatoes and egg. But beans? Sausages? That was never something I had imagine eating for breakfast.

For some reason I have never really heard of a full English breakfast until the first time I ordered it and had it in front of me. It was on a sunny Sunday, in a very busy restaurant, near the river Thames and the London Eye.

My husband was very keen on finally having English breakfast, so I ordered it as well, despite the fact that beans and sausages didn’t seem like a normal breakfast to me.

But I loved it, what else? It was indeed a very good quality (and rather expensive) breakfast, including most of the things you would normally get on your plate when ordering an English breakfast.

I nibbled on the black pudding, but I must admit that I could not eat it (it was not the taste, but the thought of what it is made of – blood is one of the very few things I am not comfortable with eating), but all the rest was just amazing – especially the beans!

Ever since (for the last 10 years or so), we have had English breakfast countless times. While we were living in London, we took every person who ever visited us out for breakfast, after we came back home, I have made an English breakfast (maybe not a full one, but close) many times and during our holiday in the UK two years ago, we must have had a full English breakfast at least 5 times.

A great way to start the day, you see, especially when on holiday. You eat your breakfast at 9 o’clock in the morning and don’t even begin to think about food again until the evening, thus having more time for something else and saving some money as well, eating out in the UK is definitely pricier than eating out in Germany.

What is a full English breakfast?

The word “full” refers more to the fact that your plate will be full with different kind of foods and not necessarily that you will get all the items that are commonly associated with an English breakfast at once.

The most important items are, of course, the bacon and the eggs, accompanied by those delicious short and thick, meaty British sausages. On top of those you can also have grilled tomatoes, fried mushrooms and, depending on where you find yourself in Britain, several other accompaniments like baked beans and black or white pudding in England, potato scones in Scotland, soda bread in Ireland or laver bread in Wales.

Well, the best full English breakfast I had was in Wales, it didn’t have any laver bread, but toast fried in lots of oil, potato scones (sooo good) and baked beans.

Other things that can be part of a full English breakfast are jam or marmalade, marmite, kidneys, kippers, hash browns and the sauces: ketchup or brown sauce. And drinks like tea, coffee or fresh juice.

The history of English breakfast

The history of the English breakfast is century old, tracing its roots back to the 14th century. According to the English Breakfast Society its tradition “first began with the gentry, before being adopted by the Victorians who refined the tradition into an art form.

Then came along the the Edwardians who standardized the ingredients, giving us the English breakfast that we mostly eat today and in doing so, created a truly a national breakfast tradition and an icon of British culinary culture.”

The gentry was a privileged layer of the English society who were proud in keeping the traditions of a typical English country lifestyle. They used to serve an impressive breakfast at social gatherings or other ceremonies, such as weddings. As weddings usually took place in the morning, the breakfast would be the first meal that the newly weds would eat together after the ceremony.

Later on, the Victorians also saw the breakfast as a way of displaying their wealth and social position. They refined the typical breakfast served by the gentry earlier, transforming it into a fine and elegant affair.

But it was during the Edwardian era, during the height of the British empire that the English breakfast started to transform into something more similar to what we know today. It is during this time that it became a standard meal to be served in restaurants and hotels and to use the standard ingredients that we associate with it today.

And another quite traditional thing to do while eating the English breakfast is to read the newspaper. It is perfectly acceptable, part of the tradition to inform yourself about the news of the day while eating breakfast and more or less ignore the other people at the table, except for commenting on something you have just read in the paper. 🙂

How to make Full English Breakfast

The baked bean recipe serves 4, while the fry-up serves 2. If making English breakfast for 4 persons, double the ingredients used for the fry-up. 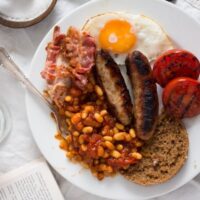 How to Make Full English Breakfast with Baked Beans

You can use two cans of cannellini beans instead.

Great description of a full English! Loved reading this it is a great informative piece of writing. But can I just say fried bread ideally done in beef dripping or goose/duck fat for a special treat and some bubble and squeak too.?

I was watching below deck sailing and guest ate beans every breakfast so I did a google search and found your post! You explained everything perfectly! Now this American needs to try to serve a proper English Breakfast!

Hi Barbara. It seems unusual to have beans and sausage for breakfast, but it tastes amazing. And you will not need any more food until dinner! :)

Adina As a Btit that was the best write up for a full English that I have ever has the pleasure of reading. All that detail was just marvellous. You are a very talented writer, especially considering English is not your first language. I do love all the detail that you include with all your recipes. It makes your blog that extra bit special. One inclusion that you mentioned, that my mum always youst to make for us, but that I haven't eaten in 30 plus years is fried bread. I guess that is a dying but best part of the full English for me in my memories. I guess as a nation we have become so much more health conscious these days..... But if you are going to go full monty and have a proper fry-up then the fried bread could be considered a wee treat and your main meal of the day.... Once again that you for a fantastic and entertaining blog. Keep up the good work.....

Hi Chap. Your comment really made my day! Thank you.

Why do I need to scroll through so much of your nonsense just to get to the recipe. Ffs stop.

I need 8 to 10 hours to write a post and that pays my bills. If you are too lazy to even scroll down for 3 seconds, please stay away.

When are the beans added to the bean sauce?

Sorry I missed that, Steven. Add the beans together with the chopped tomatoes and the rest of the ingredients.