OK, there is still about ½ cup roasted buckwheat in the bag, but I am already planning another vegan buckwheat recipe – a soup – for the weekend. When making a soup I don’t need that much of it.

Usually, I buy a bag of something similar (bulgur, couscous, spelt berries, amaranth, lentils, beans) and although I try to use it all up before it expires, it usually does not happens so fast. This time it did happen.

But not to worry, buckwheat is a super healthy gluten free plant, so it really doesn’t matter if you have it often.

You can buy buckwheat either roasted or unroasted. Sometimes the issue is specified on the packet of buckwheat, but unfortunately not always. Most recipes I cooked with buckwheat ask for roasted buckwheat.

And luckily most buckwheat that you can buy in a regular store is already roasted and usually the packet will only mention anything if the buckwheat is raw, so unroasted.

The best and easiest way to tell if the buckwheat is roasted or not is by looking at it: raw buckwheat has a very light color, while roasted buckwheat is brown and crunchier if you bite it… That easy!

This vegan buckwheat recipe is super simple. The only thing you have to pay attention to is to cook your buckwheat the right way. Cook it right and the buckwheat groats will be soft while still retaining a bite, nutty and delicious!

Cook it too long or use too much liquid (water, stock) and the buckwheat will be too soft, mushy and watery. You will not like it.

How to cook buckwheat?

The most important thing when cooking buckwheat groats is not to use to much liquid or to overcook the groats. In both cases you will end up with mushy buckwheat, which is not particularly nice to eat.

Make sure you read the package’s instructions before starting to cook the buckwheat groats. Most packages would instruct you to use a 1 to 2 ratio of buckwheat groats and water, so 1 cup buckwheat to 2 cups water.

However, I always use less water or broth to cook buckwheat, so 1 cup buckwheat to 1 ¾ cup water. I make sure that the lid of the pan fits well, so that not too much steam can escape.

How long should you cook buckwheat?

IMPORTANT: Never trust only a recipe when cooking buckwheat. ALWAYS read the packet’s instructions regarding the ratio of buckwheat to water and the cooking times.

Use slightly less water than recommended on the packet’s instructions, while making sure that the pot you are using has a tight fitting lid and start checking if the buckwheat has reached the desired consistency about 2-3 minutes before the recommended time is up.

HOW TO MAKE BUCKWHEAT SALAD

HOW TO SERVE THE BUCKWHEAT SALAD

This roasted buckwheat salad can be served lukewarm or completely cooled. You can cook the buckwheat groats in advance, let them cool and keep them in an airtight container in the refrigerator until ready to use.

To make a complete meal, you could serve some creamy vegetable soup before or with the buckwheat salad.

The buckwheat salad is a suitable dish to bring to a barbecue or a party and it makes a great side dish for meats, chicken or fish. I can imagine eating it alongside this slowed cooked shoulder of lamb, for instance.

The buckwheat salad with lemon dressing keeps very well. You can keep it in an airtight container in the fridge for several day. This vegan buckwheat recipe also makes a great lunch box food, easy to transport and to eat at work. 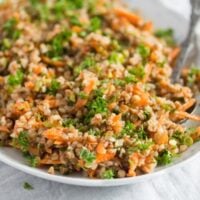 How to cook buckwheat:

ROASTED???? Why is it called "ROASTED" buckwheat salad? Nothing is roasted in this recipe...

The buckwheat is roasted! Read the post, it's mentioned there as well. Most brands of buckwheat you buy are roasted, if they're not, most recipes will require you to do it.

Very interesting. I’m intrigued by the lemon and the sugar in the dressing. Love the carrots.

Simple yet so good! The dressing would be wonderful for other whole grains too.