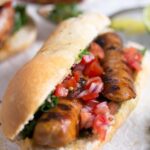 Choripán con chimichurri is one of the best sandwiches ever! Uruguayan or Argentinian street food at its best!

Choripán con chimichurri – isn’t that a wonderful name? It just fills your mouth with all those ch-s and r-s, love it! And what I love best is the way this choripán taste. Amazing! Top of the list when it comes to sandwiches.

And if you would like more Argentinian or South American food, have a look at these Spicy Beef Empanadas, these Colombian Coca Cola Cocktail Sausages, or this Peruvian Aji de Gallina. Or learn How to Cook Frozen Sausages!

Choripán con chimichurri is a very popular street food in many South American countries, not only Argentina or Uruguay but also in Peru, Brazil, Chile, and Puerto Rico. Not to mention the US, where it became very popular especially in the regions with larger Cuban communities, like Miami.

Choripán is a sandwich made with chorizo and crusty white bread, something like a baguette. So the name is a combination of the two main ingredients chori from chorizo and pan – bread: choripán.

Chimichurri is an amazing sauce made with olive oil, garlic, parsley, vinegar, chili, and oregano, which is very generously slathered onto these choripanes. Apparently, the chimichurri sauce originates in Argentina and Uruguay, but it is popular all over Central and South America.

According to Wikipedia, the name chimichurri comes from the Basque world tximitxurri, which can be translated as “a mixture of several things in no particular order”.

Well, it is just a sandwich after all, so you will not really have any difficulties making it.

The oil might look weird after spending the night in the fridge, but don’t worry about it, it will look normal again once it reaches room temperature.

The Portuguese chourico is popular in my area. It is garlicky and liberally seasoned with paprika. My family loves it! Needless to say, these choripánes would get devoured around here! We have never had it served with chimchurri but this looks and sounds deliciuos!!

Love that you had a world food series!! We had world cup fever in this house as well (my son loves following it) and it was fun having things like empanadas and waffles and such at our house, too! We tired but no where as extensively as you did. Way to go. It's so fun to eat internationally and diversify, learning at the same time. What fun and deliciousness.