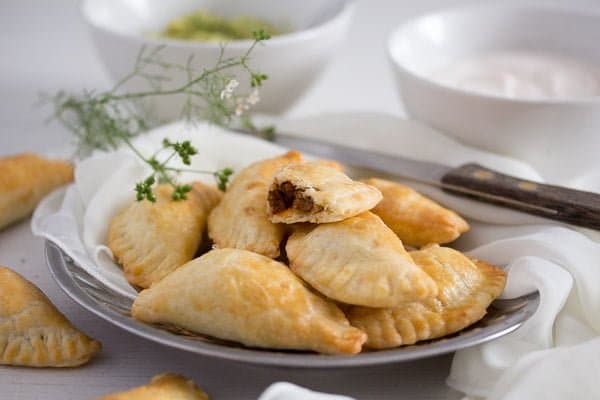 I forgot to count these beef empanadas when I made them, I would say they were about 40, two whole baking trays. But let me tell you, they were gone in no time. OK, we did not polish them all on our own, so many would definitely be too many for just two adults and two children. We had some help, but still… when I saw how many the recipe would make, I’ve never thought they would be gone so fast. 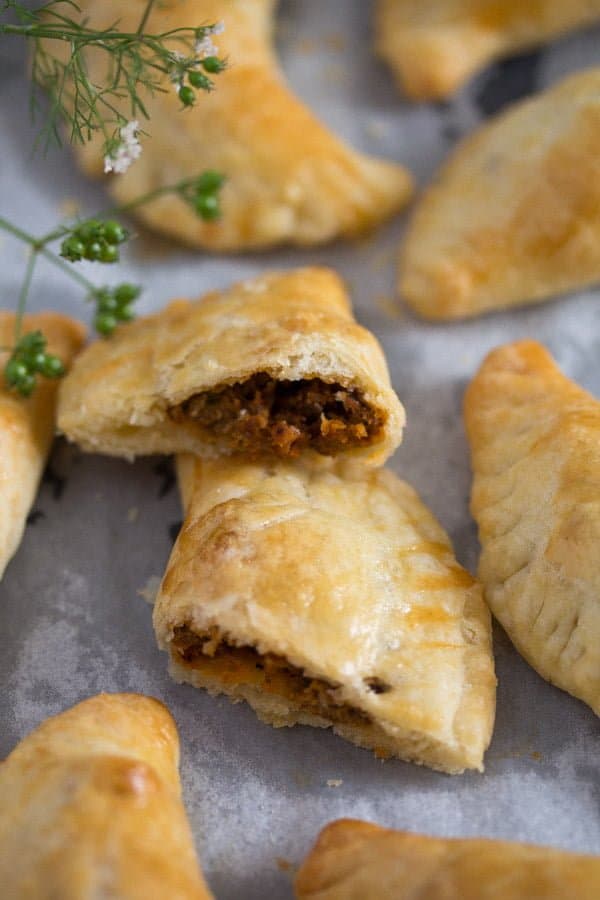 Beef empanadas for Argentina during this way too long World Cup food series. Well, the World Cup is very much over, but I have cooked so many delicious dishes from countries participating in this year’s World Cup, I just have to keep going.

I have some South American recipes for you this week. I started with the Uruguayan Choripán con Chimichurri on Sunday and I had already mentioned then that it was not easy to decide if I was to dedicate the chorizo sandwich to Uruguay or Argentina (or other participating Latin countries).

It was the same with the empanadas, they are so popular all over Latin America, it is hard to say they belong to one country or another. But anyway, the empanadas are delicious, no matter if Argentinian, Mexican or Uruguayan. 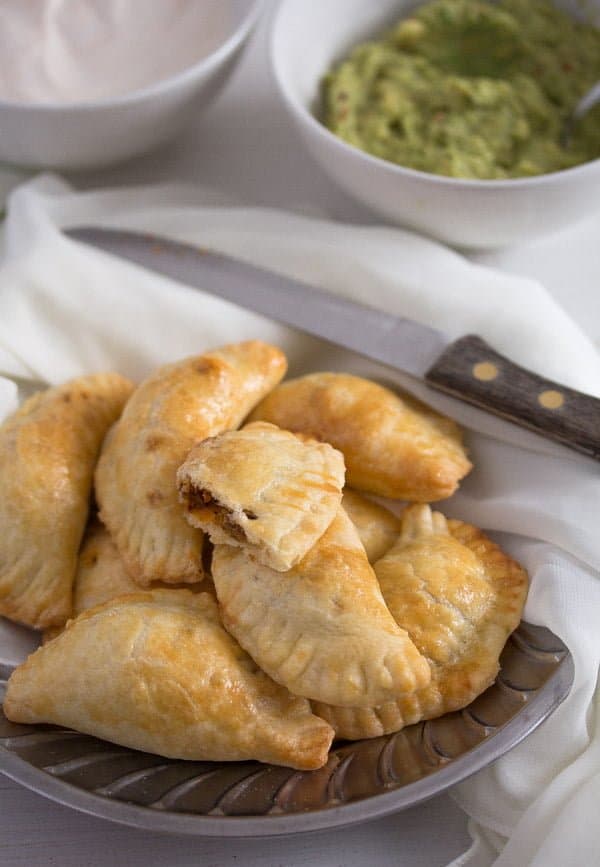 Empanadas are pastry pockets filled with various fillings. They can be either baked or fried. They are very popular not only all over Latin America, but also in the South of Europe.

Their origins can be traced to Spain (Galicia) and Portugal, apparently they became known in this region during the Middle Ages in the time of the Moorish invasions. They are even mentioned in the first Catalan cookbook from 1520 – Llibre del Coch.

However, the empanadas or better said, similar kind of pastries filled with something, are much older than that, some sources mention Persia, sometime before Christ. There are versions of empanadas to be found in many countries of this world, just think of the Cornish pasties or the Indian samosas.

When the Spanish arrived to the New World during the 16th century, they brought the recipe for empanadas with them. 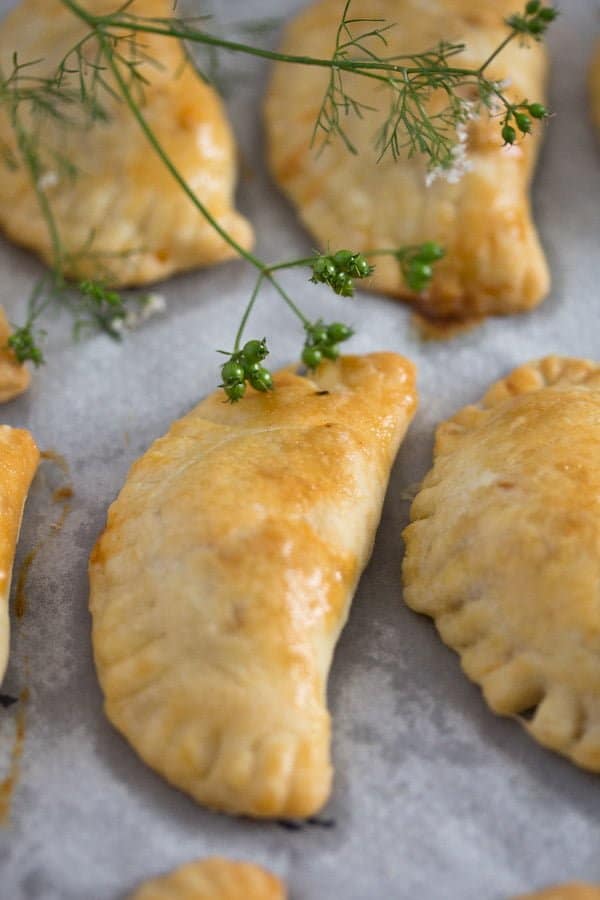 How to make empanadas:

Basically, just do what the name of the food says. The name empanada comes from the verb empanar, which means to wrap something, in this case wrap the filling in a disc of dough. 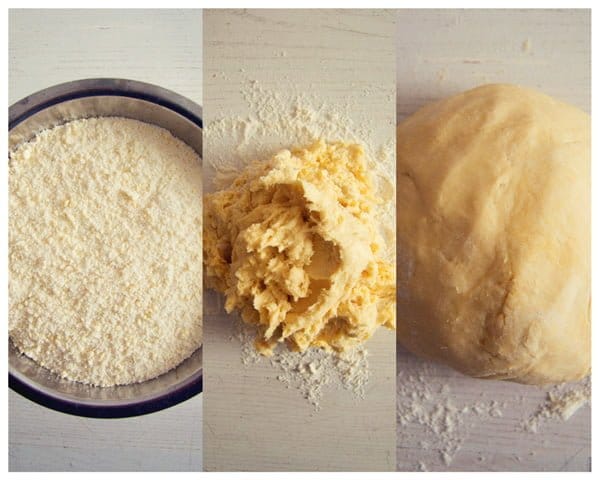 The dough is usually made with wheat flour and butter or lard. The dough has to be thinly rolled, cut into circles, filled and wrapped into a semicircle. The next step is to thoroughly close and crimp the edges to seal the empanadas.

There are more beautiful ways of folding and crimping the edges of an empanada, but that requires practice and time. If you would like to learn how to do that, have a look at this video. For our purposes, which are just eating those delicious empanadas and not spending ages making them, crimping the edges with the fork is quick, easy and quite sufficient. 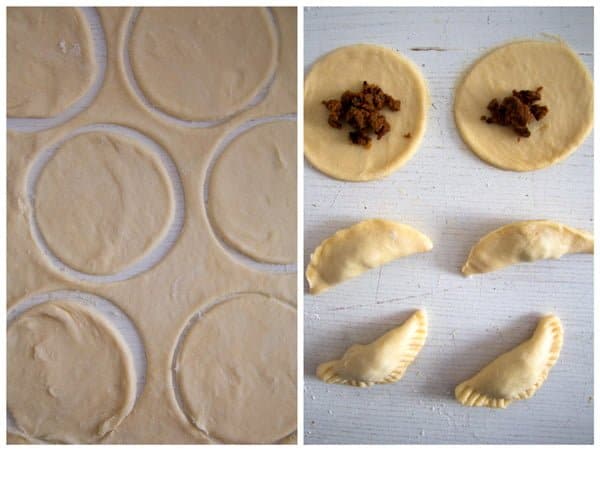 Making the beef filling for empanadas is super easy. Mix most of the ingredients together, fry them a little, add some more ingredients and cook the meat through. Let cool, while you make the dough and while the dough is resting.

There are endless ways of filling empanadas. They can be made with beef or chicken, they can be vegetarian and they can even be sweet. I have made chicken empanadas before and I have made vegetarian samosas, quite a few times, I should post that recipe sometime, it is delicious.

And although I have never made real sweet empanadas before, I did make these pumpkin pasties many times before, they come pretty close to an empanada, I think. The British version of an empanada. 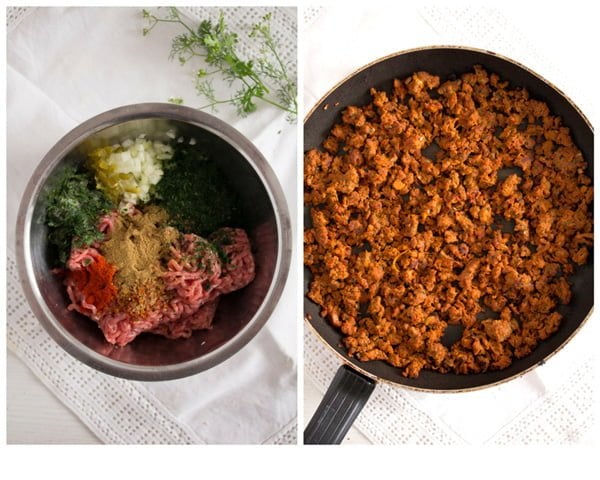 The recipe for these Empanadas with a Spicy Beef Filling – Argentinian Food is inspired by a recipe found in my favorite food magazine – Good Food. I have a subscription to it, I have been having one for ages and I just love it. If you live in the UK, I could only recommend it. However, that was only the inspiration, I have changed the original recipe quite a lot.

How to serve and store the empanadas:

The Empanadas with a Spicy Beef Filling can be served hot, warm or at room temperature. You can serve them with guacamole and sour cream and a nice green salad.

You can transport them very easily and have them on a picnic.

The empanadas keep well in the fridge for up to 2 days and can be reheated in the oven at about 180 degrees Celsius/ 360 degrees Fahrenheit for about 10 minutes or until hot.

You can also freeze unbaked empanadas. Lay them on a baking tray or another tray that fits in your freezer. Let them freeze well, then transfer the empanadas to freezer bags of freezer containers. By freezing them on the baking tray you can make sure that the empanadas won’t stick together and freeze in a clump.

Frozen empanadas keep for about 3 months in the freezer and can be baked directly from frozen as indicated in the recipe, but adding an extra minute or two to the baking time.

Cooked empanadas can also be frozen and reheated in the oven, although the pastry might lose some of its flakiness. However, if you have made more than you can eat, freezing them is still a very good idea. 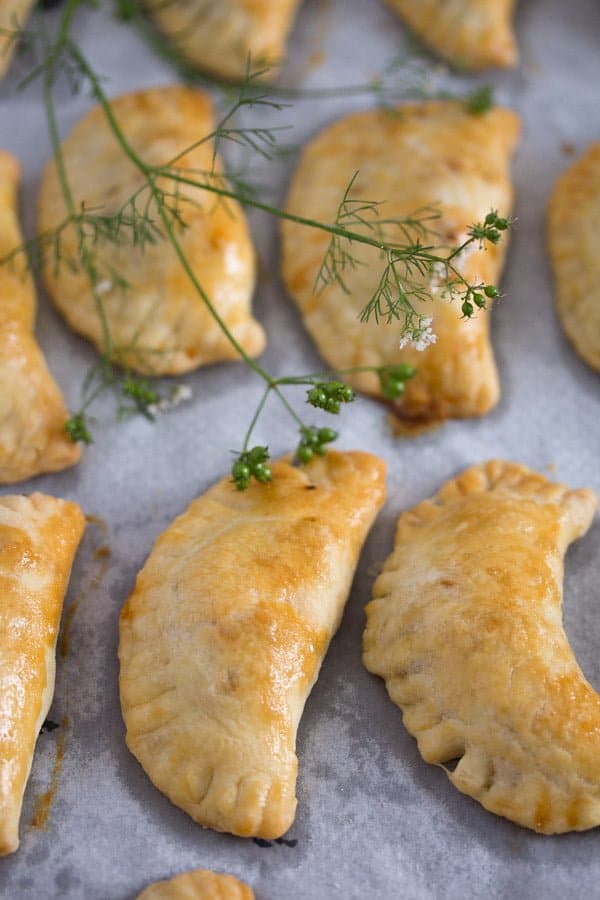 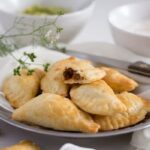 Heat the oil in a non-stick pan and fry the mixture for about 2 minutes, breaking the lumps of meat with a wooden spoon. Add the tomato paste, stir well and continue cooking the filling until the meat is cooked through, about 5 minutes. Allow to cool while you make the empanada dough.

Give the flour and the salt to a bowl. Mix well. Cut the very cold butter into small cubes and rub it into the flour with your fingertips until the mixture resembles fine crumbs. Only use your fingertips and not your whole hands, otherwise the mixture will become too warm and soft. You can do this in the food processor as well, it's easier and quicker.

Beat the eggs lightly and add them to the mixture. Add about ¾ of the very cold water and mix or process very shortly until the dough comes together. Give the dough onto the lightly floured working surface and knead very briefly to obtain a smooth and soft dough. Only add the remaining water if necessary.

Wrap the dough into cling film and refrigerate for 20 - 30 minutes.

Divide the dough into 4 portions.

Roll the first portion into a thin sheet and cut the discs using a round cookie cutter of about 10 cm/ 4 inches. Give about 1 teaspoon filling in the center of the discs.

Slightly lift both parts of the circle from the table (while the heavier part of the empanada containing the filling still rests on the table) and press the edges together. You can slightly wet the edges with some water, if you fill that they don't keep together properly, but I didn't find it necessary, it was a hot day and the dough was rather soft.

Repeat with all the remaining dough and filling. I had about 40 empanadas.

Brush the empanadas with beaten egg.

Bake for about 20 minutes or until golden brown and cooked through. Serve as suggested above.

Note 1: I could not find fresh jalapeňos, so I used 3 or 4 slices pickled jalapeňo. They were really hot, but delicious. Keep in mind to adjust the amount of jalapeňos according to your heat tolerance. Note 2: I recommend weighing the butter, either in grams or ounces. It is a mystery for me, how can somebody manage to properly measure butter in cups, especially when the recipe requires cold butter.