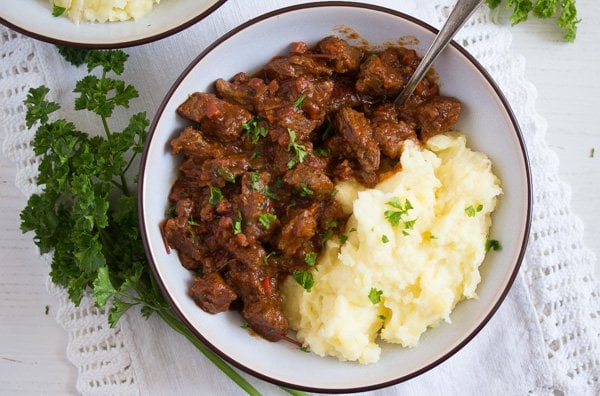 An authentic Hungarian goulash recipe for one of Hungary’s most famous dishes. Tender beef pieces in a rich delicious sauce made with lots of paprika and with caraway seeds.

Before starting any discussion regarding authentic, traditional recipes, I would like to point out that every traditional/national recipe, although following some general rules and a similar list of ingredients, does differ from region to region, village to village and house to house.

Just as an example: my grandmother’s recipe for the Romanian national dish sarmale – cabbage rolls tastes different than any sarmale I have ever tasted in any other household. I am not speaking of restaurants because I would never come to the idea to order some in a restaurant, that is just something I make at home.

My aunt and I have both learned how to make sarmale from my grandmother and although we both follow her recipe (I do that to the letter), our sarmale never tasted exactly as those my grandmother used to cook. 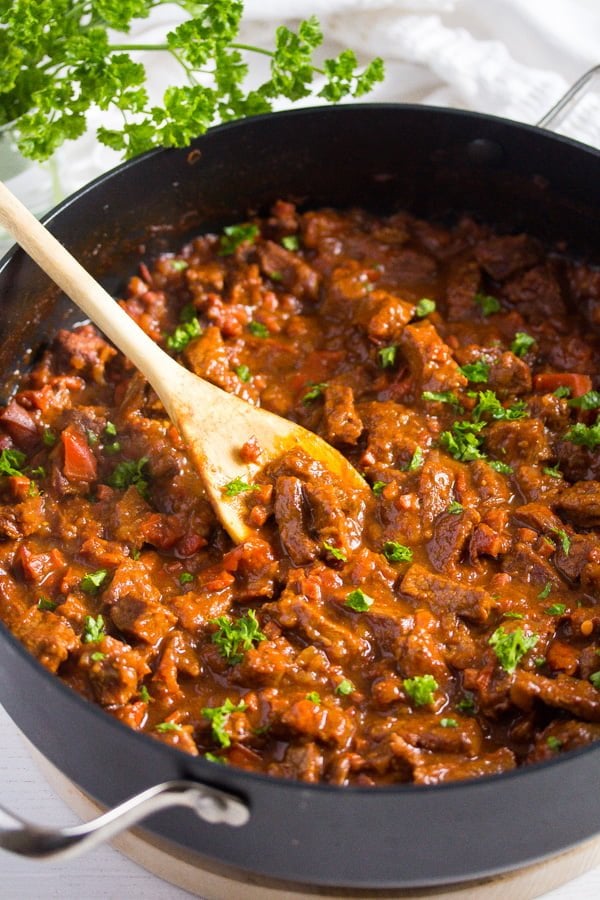 This is probably the same with this Hungarian beef goulash.

The recipe follows the traditional, classic rules of cooking a Hungarian goulash, uses the ingredients that are to be found in recipes for the Hungarian beef goulash, but I am pretty sure that even in this case there will be plenty of people who, for some reason or another, will have something to complain…

Still, I really wanted to post this recipe for an authentic Hungarian goulash because this beef goulash is so amazingly good, so really worth it to learn how to make it and then cook it on a regular basis. 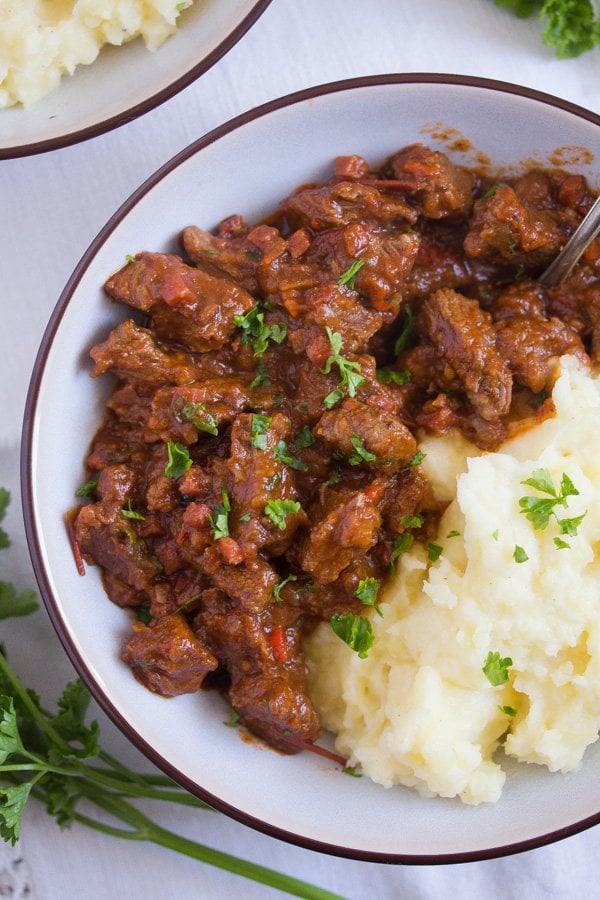 I am Romanian and I was born and raised in Transylvania. A very large Hungarian minority lives in Transylvania, so there is no surprise that many of the dishes I grew up with are Hungarian or are very much influenced by the Hungarian cuisine.

Have a look at this amazing Chicken Paprikash, which was one of my favorite meals as a child (still is), these delicious Hungarian Langos, which my grandmother used to make so often or this amazing Dobos Torte, another Hungarian classic.

My grandmother never ate beef, so she never actually cooked this Hungarian beef goulash. What she did cook a lot was the pork version of the Hungarian goulash.

So, when deciding to cook this easy Hungarian beef goulash recipe, I had to check with some cookbooks first. I have quite a few Romanian and Saxons cookbooks (a lot of Saxons used to live in Transylvania as well and they also cooked many Hungarian inspired dishes) and I have to say that all the recipes I found (about 7 or 8 of them) are very similar.

Some use lard to cook the beef, some use oil but recommend using lard if available, some are made with potatoes, others are served with dumplings. Some use lots of tomatoes, some less. Some spice the Hungarian beef goulash with caraway seeds, some leave those out.

What they all have in common are the use of lots of paprika, lots of onions and red peppers.

The result is an incredibly rich, flavorful beef stew, comfort food at its best! 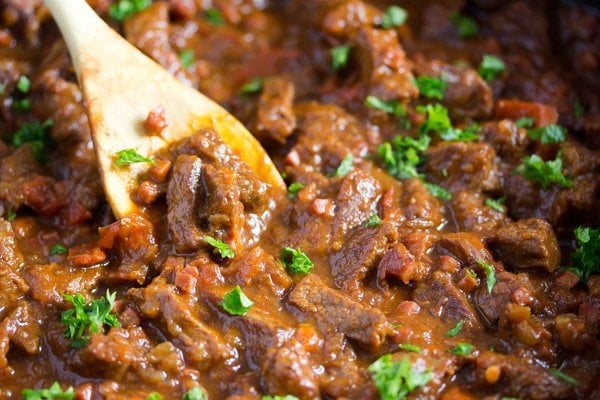 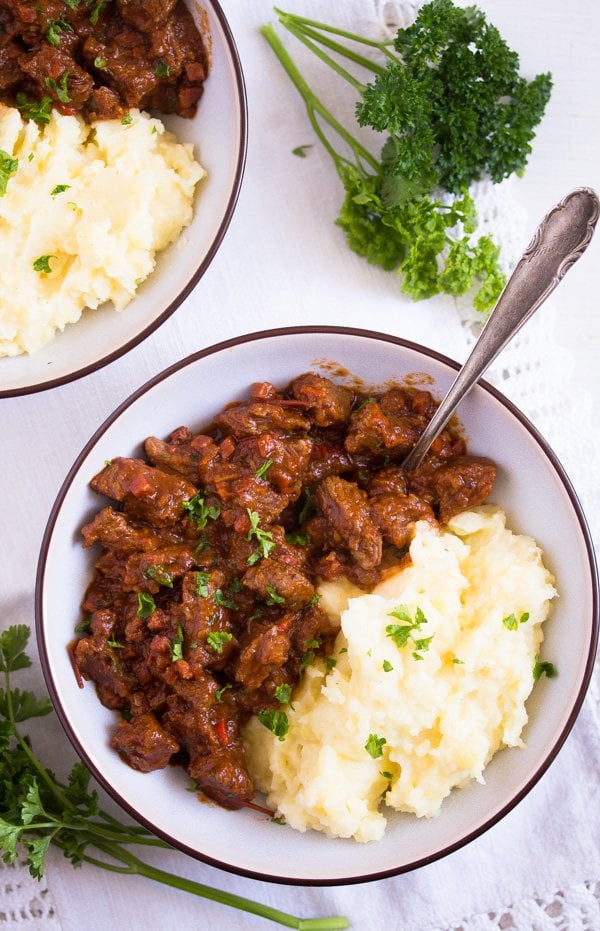 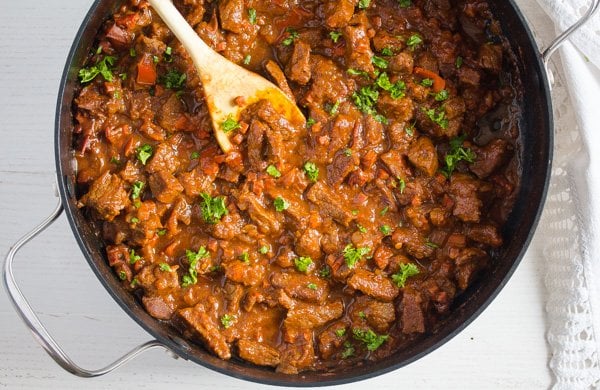 HOW TO MAKE HUNGARIAN BEEF GOULASH?

Step 1: Cut the beef chuck into small cubes, about 2 cm/ 0.7 inches. Give them onto paper towels and pat them dry with more paper towels. 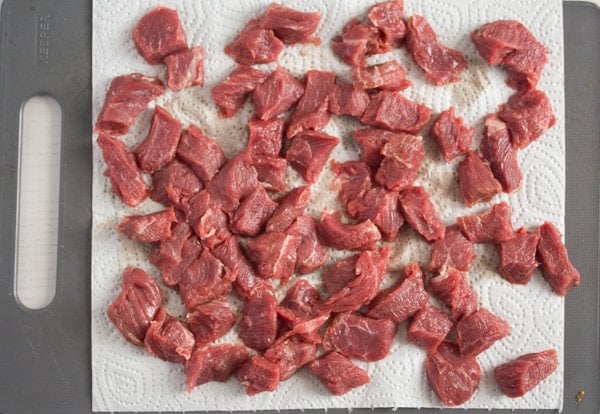 Step 2: Melt some of the lard in a Dutch oven or heavy bottomed stewing pot. Fry the beef cubes in 2 or 3 batches, depending on the size of your Dutch oven, adding some more lard before each batch. Give the fried beef cubes to a plate and set aside. 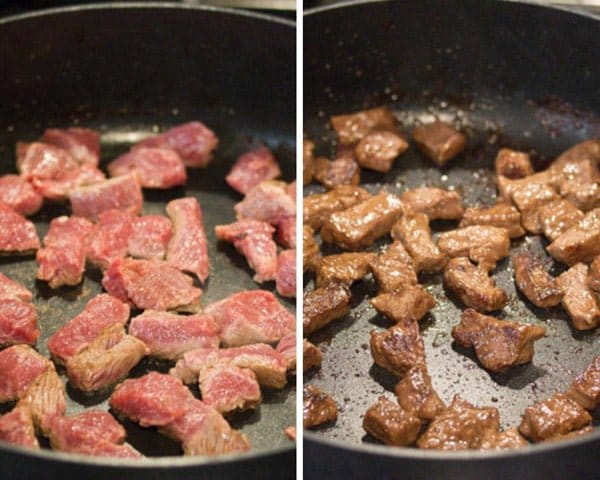 Step 3: Add about 1 teaspoon more lard to the pot and fry the chopped onions until very lightly colored, about 4-5 minutes, stirring often and keeping an eye on them.

Step 5: Add the spices, stir well to coat, about 1 minutes. Add the tomato paste, meat and beef broth. Cover, bring to a boil, lower the heat and simmer until the meat is really tender. This will take about 1 ½ to 2 hours.

Step 6: Remove the lid and continue simmering the Hungarian beef goulash for another 10-15 minutes, allowing the sauce to reduce and thicken slightly. Adjust the taste with salt and pepper. 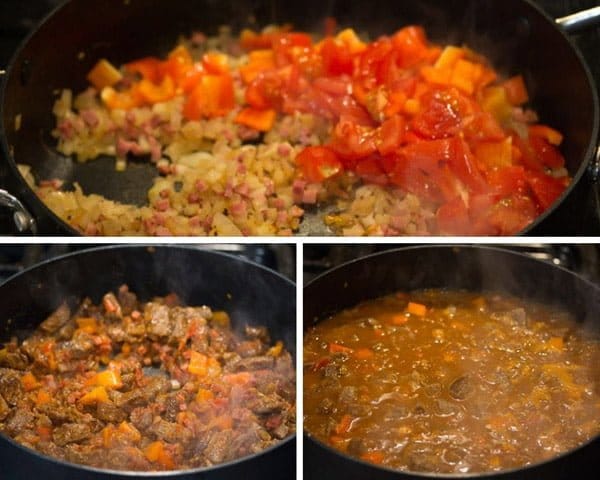 HOW TO SERVE THE HUNGARIAN BEEF GOULASH

The Hungarian goulash can be served immediately and it can be reheated as well.

In Romania, we always ate goulash with pickled vegetables, pickled green tomatoes most of the times. Gherkins or other pickled cucumbers or vegetables are great as well.

Crusty bread and sour cream, preferably the Eastern European sort called smetana are perfect side dishes for the Hungarian beef goulash. However, nowadays I love eating goulash with mashed or boiled potatoes.

You can also serve the goulash with dumplings – nokedli, gnocchi, spätzle, egg noodles. 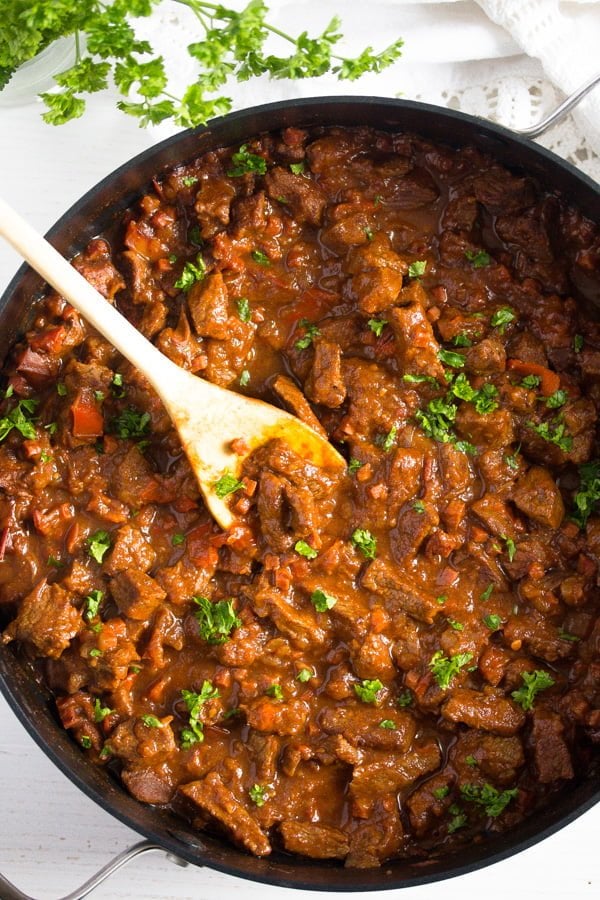 Can I make Hungarian beef goulash with pork?

Can I add potatoes?

You can add potatoes, the Hungarian goulash will be less authentic, but very good as well. Add small potato cubes during the last 30 minutes of the cooking time and add more broth to make sure that they are cooking properly. Check that the potatoes are soft before turning off the heat.

Can I leave out the caraway seeds?

If you definitely don’t like them, you can leave them out. Otherwise I recommend using them.

Can I freeze Hungarian beef goulash?

Yes. The goulash can be frozen in airtight containers for up to three months. Defrost it slowly, preferably overnight, in the refrigerator.

Cut the beef chuck into small cubes, about 2 cm/ 0.7 inches. Give them onto paper towels and pat them dry with more paper towels. Chop the onions very finely. Chop the pepper and the tomatoes as well.

Melt some of the lard (or oil) in a Dutch oven or heavy bottomed stewing pot. Fry the beef cubes in 2 or 3 batches, depending on the size of your Dutch oven. Fry for about 5 minutes per batch or until nicely browned on all sides. Add more of the lard before each batch. Give the fried beef cubes to a plate and set aside.

Add about 1 teaspoon more lard to the pot and fry the chopped onions until very lightly colored, about 5 minutes, stirring often and keeping an eye on them. If they threaten to catch, add a splash of water and continue cooking.

Add the garlic, chopped peppers, tomatoes and bay leaves and cook for about 3-4 minutes, stirring a few times in between.

Add the paprika and caraway. Stir well for about 1 minute, add the tomato paste and stir well again. Add the meat cubes and the beef broth, stir well.

Cover the pot, bring to a boil, lower the heat and simmer the Hungarian beef goulash until the meat is very tender, about 1 ½ – 2 hours. Check to make sure that the meat is really tender.

Uncover the pot and continue cooking the goulash for another 10-15 minutes until the sauce reduces and thickens slightly. Adjust the taste with salt and pepper.

Snickerdoodle Recipe Without Cream of Tartar

I won’t complain as long as it involves beef 🙂 And yours looks fantastic!

I can just imagine how good your goulash is…delicious!

Hello Adina, I just wanted to let you know that I made this for family dinner yesterday and thought it was wonderful! I have tried several Hungarian goulash recipes over the years and my search has ended. I served it with egg noodles, but will try your nokedli recipe next time. Also, my family and I lived in Germany for several years and I have been craving a good bowl of German gulaschsuppe — I think this will make an excellent starting point for that! (and if you have any suggestions I would love to hear them!)

Thanks for posting this recipe, I look forward to exploring more of them!

Hi Bridget, so happy to read your comment. We love this goulash as well. I will try to post a recipe for the German Goulaschsuppe as soon as possible. 🙂

That would be wonderful! Thanks, Adina!

It was good, but I couldn’t find authentic Hungarian Sweet paprika bear me and tried organic paprika in it. I think that’s what my dish was missing but I still loved it and it hit the spot.

So happy to hear it, Tracy. Thank you.

Hello Adina! Good to see your recepie about Hungarian food. Thre right method to make always start with onion in otherway is not Hungarian.

My Grandfather was also born in Transylvania, and came to the USA with his family when he was 2 years old. I wanted to compare the goulash recipe I have from my mother (it was her father that came from Transylvania) to see if it is authentic, and yours was the first one I looked at. Mine has bacon, green pepper, white wine and marjoram. Have you heard of any of these ingredients used in an authentic recipe? Thanks!!

Hi Chris. I guess it all depends on the region, you will probably not get far and find another version. This one is slightly more Hungarian than Romanian/ Transylvanian. Green peppers make total sense, we use them more than the red ones for cooking. But not the bell pepper sort, you need the smaller, pointy ones, which are only pale green, more yellowish and are milder in taste. Bacon is very often added, but I have never used white wine or marjoram. Marjoram was totally unknown to me in Romania, I image that your recipe was originally made with cimbru, which is the most common dried herb there, but difficult to get in other countries.

greetings Adina, just wanted to tell you I made this last night for dinner and it was fabulous, One thing i loved about it was it was not so chunky as goulash i have tried in the past and the flavors just melded so well together. I couldn’t find any hot paprika added a dash of cayenne, i will keep hunting for it as this is a keeper for us. Thanks for sharing, Linda

Hi Linda. Thank you for letting me know, I love to hear if the recipes work for my readers as well. Have a nice week.