Pan fried zucchini slices, one of the easiest and most delicious ways of enjoying zucchini in summer.

I could not call this a recipe that it is only typical for the South of Romania – Oltenia, which is the focus point for this two weeks’ series, but I chose to feature it here because for some reason I always relate those Romanian yellow-greenish zucchini with the South of the country and from what I have noticed lately, while searching for ideas for this series, the people of Oltenia do seem to eat more zucchini than the rest of the country.

And if you like, here are two more of my favorite Romanian recipes, typical for the South of the country: Turkey Meatball Vegetable Soup and Leek and Black Olive Stew. Amazing recipes, you should definitely try them!

This fried zucchini recipe is something my grandmother used to make at least 2 or 3 times every summer. It is quick, it only needs four ingredients and it is a very cheap recipe, if the zucchini are in season this will probably not cost you more than 1 or 2 Euros for the whole batch.

And even kids, who would normally not want to have anything to do with zucchini, will enjoy eating these tender battered zucchini slices.

INGREDIENTS FOR THE PAN FRIED ZUCCHINI

Lard is starting to regain its reputation again, which is a good thing if you ask me.

I am glad that people are finally starting to realize that what makes us ill is not the natural fat, which we have been consuming for thousands of years, but the processed, unnatural things like shortening and margarine, which have been pushed so high only in order to get a small amount of people a very large amount of money at the cost of millions of people’s health and eventually lives. It might sound a bit radical, but I truly believe it! 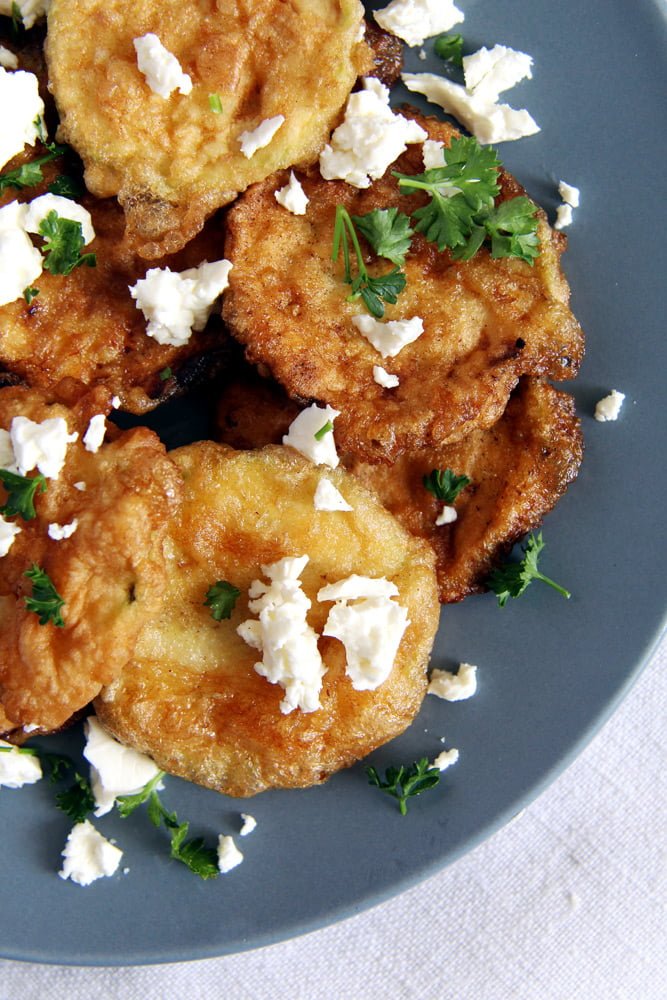 HOW TO MAKE FRIED ZUCCHINI?

The recipe for pan fried zucchini could not be any easier.

HOW TO SERVE FRIED ZUCCHINI?

The Romanian pan fried zucchini can be served as a light summer meal with bread, tomatoes, garlic sauce and, if you like, some crumbled feta on top. I like them both hot or cold.

When cold I use them to make sandwiches for my husband’s work lunch the next day, for instance.

Spread some cream cheese, mayonnaise, hummus or chili sauce on a slice of bread, add the fried zucchini slices, sprinkle with salt and top with a slice of cheese, either feta, Gouda or cheddar. Leave it as an open sandwich or place another slice of bread on top. Absolutely delicious!

You can also fry the zucchini in vegetable oil.

wow! would go well as a snack or even as s side with a main right? have a nice weekend

I love simple recipes! They are always the tastiest. I usually make these with sunflower oil but I will try them with lard next time. Have a nice weekend!

Great timing since zucchini is so plentiful and so good right now. I hadn’t thought about making this but it’s such a great idea. Looks very delicious.

Oh gosh Adina – this is JUST in time for all the zucchini that is coming into season right this minute. Hurray!

YUM!! You can never go wrong with friend zucchini!

Fried zucchini are my favorite too. I didn’t know it’s a typical food in Romania. It’s not in Asia, I was only exposed to it after I came to the U.S.

Excellent and such an easy way cook courgettes! I especially like the idea of putting the remains into a sandwich. It sounds amazing!

I bet these would be like candy, impossible to resist!!

Thank you so much for posting this recipe! I read it several times because I didn’t think it was right that the egg came after the flour, but I did it and it turned out AMAZING! My Greek grandmother would sometimes make Romanian dishes and while I never had this one, it tasted very familiar to me. So yummy, I will for sure be making this again!

Hi Amy, thank you so much for your feedback. I am so glad you liked the fried zucchini.

zucchini looks so yumm.. we have a similar recipe made from aubergine. try that too sometimes.
have a great day adina

My garden zucchini will be ready soon and I will need to give this recipe a try. It looks really delicious and simple. A great way to use up lots of zucchini!

Can’t wait to try this!