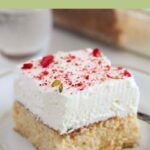 A light sponge cake soaked with a mixture of evaporated milk, sweetened condensed milk and cream and topped with more whipped cream, a cake can hardly get any more decadent and delightful. This is the famous Mexican dessert – Tres Leches Cake.

Well, I do have a few more decadent and delightful cakes full of whipped cream on the blog, if you like, have a look at this Amazing Cake with Lemon Curd, Cream and Raspberry Filling or this Mandarin Orange Cake with Cream and Almond Meringue.

Well, I am saying Mexican dessert or cake recipe, but according to many sources, including Wikipedia, although soaked-cake desserts were known in Mexico in the 19th century already, this particular cake became famous all through Latin America sometimes during the 20th century, mostly due to the fact that a recipe for it was printed on the Nestle sweetened condensed milk can labels.

So, this three milk cake became popular not only in Mexico, but almost everywhere in Central and South America, North America, the Caribbean, and the Canary Islands.

During the past years, it also became famous in several European countries, such as Albania, Macedonia, or Turkey and this is believed to be the result of the popularity of South American telenovelas in these countries. I only wonder, telenovelas are incredibly popular in Romania as well, and they have been so for almost 30 years now, but I have never heard of tres leches in Romania.

Actually, the first time I’ve heard of it was while searching for a recipe for the Polish Bezowy Torte, an amazing meringue cake filled with whipped cream and mascarpone.

While it proved very difficult to find a recipe in English/German/Romanian for this particular Bezowy cake that would resemble the wonderful cake we had eaten in Poland, I stumbled upon a recipe for a Polish version of the Mexican cake.

I was wondering, as the name is so very much Spanish, so I had a look at the recipe, and knew I had to make that someday… It took me about half a year, but I got there. 🙂

Tips for making the base:

Yes, you should make tres leches one day in advance, so that the sponge has enough time to soak the milk. You can make it up to two days in advance, but in this cake only top it with whipped cream (and fruit or berries) shortly before serving.

Keep refrigerated in an airtight container. It will keep for up to 4 days. It will become slightly soggier with every day that passes, but it will still taste good.

Can I freeze it? i love how much whipped cream is on this! tres leche is one of my favorites. :)

I think I'm going to make this cake. It looks like something my husband would love.

Looks fabulous! That thick layer of icing is totally irresistible. 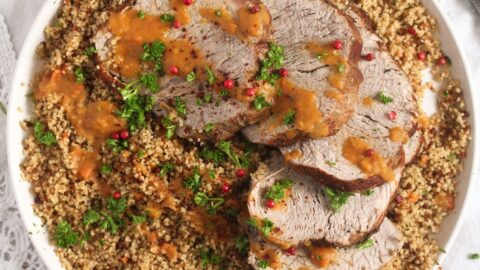 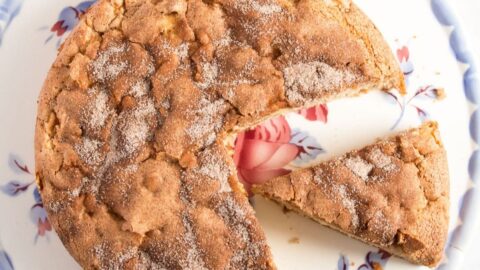 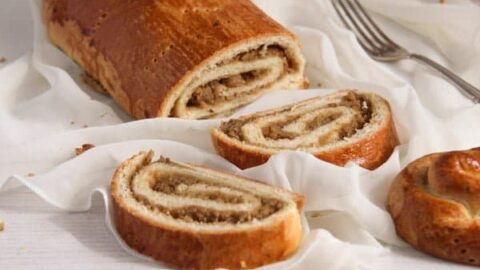