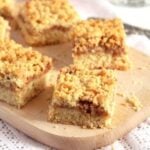 After the Famous Romanian Cakes Series from last month, featuring extremely delicious yet rather laborious to make Romanian cakes like the Romanian Boema Cake or the Lemon Cake – Lamaita, I am getting back to the basics now and give you the recipe for a super easy to make Romanian cake, the so-called Prajitura razuita or the Grated Cake.

This is another old cake recipe, which most Romanian grandmothers have a recipe for, they are all slightly different but the principle is the same: one simple dough, jam and nuts.

However, although I make this cake in the winter months as well, the season is not decisive anymore nowadays. And the cake tastes just as good in summer as in winter.

Actually the last time I’ve made this (last week) I was happy the weather was so nice and the kids could eat their cake in the garden. Why? Well, the cake is pretty crumbly (like the name says) and I was glad to have all the crumbles scattered in the grass where the birds can eat them, rather than in the kitchen where I would have to sweep them away myself later… 🙂 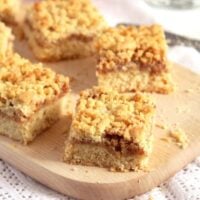 Can I use oil instead of lard or shortening?

Hi Diana. Butter, maybe, although I've never used it for this recipe, so I can't tell how that will be. I would not use oil; a 1:1 replacement would not work for sure.

i love crumb cake! apricot jam is a great idea for that center flavor. :)

I'll take three pieces please :) Oh that crumble and gorgeous apricot jam are making my mouth water. Freezing and grating the crumble topping is so smart! During the summer and 100 degree days the topping for my favorite fruit crumble bars is always threatening to melt and flatten before baking, can't wait to try your technique.

How awesome that you bake with lard. I bet the results are amazing! This cake sounds good to me year round!