Rhubarb raspberry jam – an aromatic, fruity and lower sugar  jam/preserve to celebrate the short rhubarb season. An easy to make jam, this has the potential of becoming a favorite in your house.

This is a variation of another favorite jam – the rhubarb strawberry jam – which I have been making every spring for years now. This time I wanted to try it with raspberries, I usually find them to have more flavor than the strawberries and after tasting a raspberry jam made by a friend, I was really in the mood of using raspberries in a jam as well.

I never did that before, I always thought that the little raspberry seeds would be annoying in the jam, but now that I finally made it, I realize I have been missing out on it for years. The jam is unbelievably fruity and delicious and the seeds don’t bother me one bit. How to remove the seeds from the raspberries When making this rhubarb raspberry jam, I was quite bold with the use of sugar, meaning that I only took one part sugar for three parts fruit, which is really not a lot considering that this is a rhubarb jam we are talking about and rhubarb is sour. But I love it this way, just give it a try and you will see.

The jam is not as sweet as most jams are, but it tastes better than most jams I ever had. You can really taste the raspberries and the rhubarb and not eat something undefinable, which is only sweet and nothing else. I love to eat this jam on crisp bread over a thick layer of cream cheese.

I made enough jam to fill 4 large jars, you would probably need about 7 or 8 normal sized jars. If you are not sure about the right way of sterilizing your jars, have a look at this post Simple Apricot Jam and How to Sterilize Jars.

Otherwise, I hope you are having a great weekend! 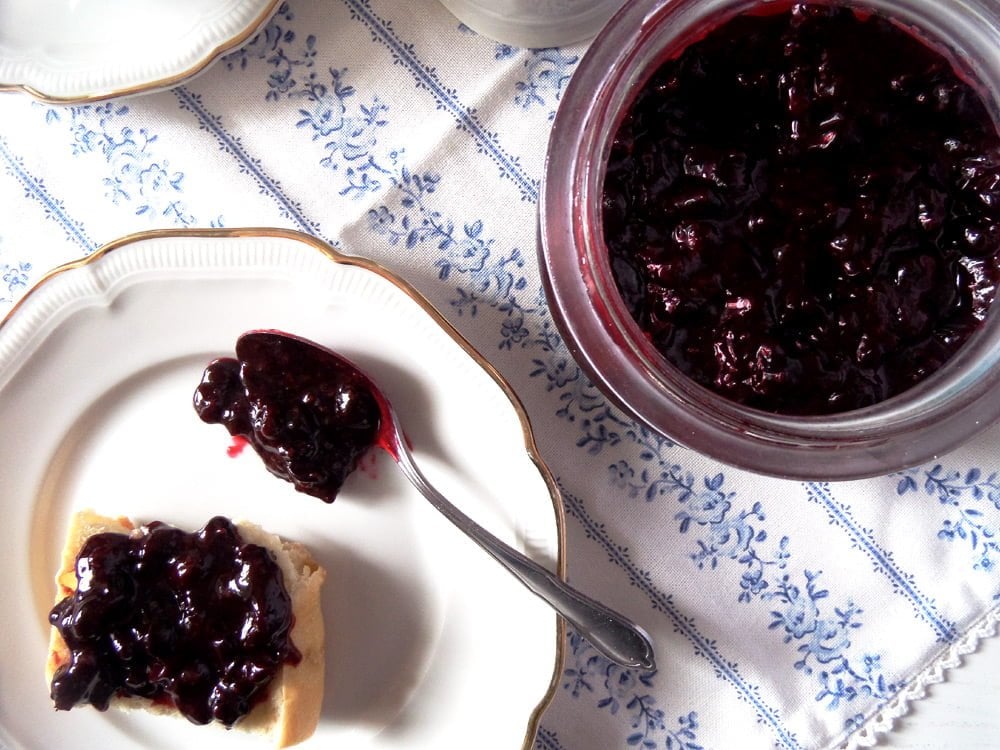 This is the most beautiful color and I’m sure those two flavors would meld deliciously together!

This time of year I love everything rhubarb! Love that you’ve paired it with raspberries in the jam!

I am the same with rhubarb, I can’t have enough of it.

Such a stunning looking jam and really beautiful pictures Adina! I just love raspberry anything and can’t wait to try it paired with rhubarb, the sweet/sour combo sounds delish especially with bread and cheese 🙂

I hope you try it, Brie, I think you would like it.

I have always wanted to make my own jam at home but have never got around to it. Hopefully I will change that this coming winter! I love the sound of the rhubarb/raspberry combination here, Adina 🙂

So strange to hear you talking of the coming winter 🙂 . Making jam is easy and the homemade tastes always better than the bought one and there are so many combinations possible, things you could never buy in a store.

So much yes to all delicious rhubarb dishes. And this rhubarb raspberry jam sounds and look wonderful. Lovely recipe, Adina.

Thank you, Anu, I am glad you like it!

Question…..how would I go about making a seedless raspberry rhubarb jam? Would I used the same measurements even after omitting the seeds?

Hi Sherry. Yes, you can keep the measurements, the seeds will not weigh that much, it won’t matter. I added some instructions on removing the seeds of the raspberries, if you are interested. 🙂 Have a nice day!

I just made this! The color is absolutely gorgeous and everyone loves it! This will be a yearly jam for us! Thank you

Thank you for your comment, Rose, so happy to read it! 🙂