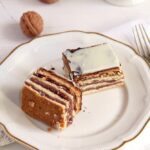 How to make the Greta Garbo cake – an old cake recipe made with layers of yeast dough, jam and ground walnuts.

This is an easy to make yeast and jam cake also known under the name of Zserbo (Hungarian) or Gerbeaud after the famous Cafe Gerbeaud in Budapest. I have never visited this Cafe but this cake is apparently one of its most appreciated cakes alongside Dobos Torte and the Esterhazy cake.

Vintage cake recipes, which all found their way into the Romanian kitchen as well, Romania has a large community of people of Hungarian origin living in Transylvania, who greatly influenced the Transylvanian way of cooking and baking.

The story of its “new” name Greta Garbo has apparently something to do with communism. The person who gave this cake its new name and made it doable for the housewives was a woman called Silvia Jurcovan. She was born in 1913 and spent her adult life in my hometown Sibiu, in Transylvania.

Her son started studying in Bucharest in the 1970s and wrote to his mother asking for some easy recipes which he could cook for himself. After her first letters containing some of the required recipes, he complained to his mother about the vague quantities she was mentioning and the unclear instructions.

I know his pain exactly. What I hate most about typical Romanian recipes inherited from my grandmother or given to me by my aunt are the words “faina cat cuprinde”, which means take as much flour as the dough allows!!!!!!!!!!!!!!!! Or “bake/cook until is done”.

How on Earth should I know how much dough the dough allows, every dough is different, they have different textures and consistencies depending on the cake you are making, and we all know how much difference 100 g flour less or more can make in a cake. (By the way – that is one of the reasons I hate cup measuring as well).

So, in an attempt to help her son, Silvia Jurcovan started to organize her recipes and this culminated into the publication of her book called “Cookbook for the Young Housewives”, which I think is the number 1 bestseller Romanian cookbook.

And coming back to the name of this cake, apparently she called it Greta Garbo, because she was worried about being accused of imperialism and sympathy with the West if she would keep the original name of Gerbeaud. Or maybe she just wanted a more understandable name for the cake, Greta Garbo was famous in Romania as well and everybody knew her name :).

I baked this cake out of Silvia Jurcovan’s cookbook and I mostly followed the recipe’s instructions as they were. The major change was to replace the 500 g/ 1.1 lbs sugar she wanted me to sprinkle the cake layers with, with only 150 g/ 5.3 oz.

The cake is very sweet as it is, so I thought that to be a print mistake, I cannot imagine why somebody would dump so much sugar on a cake.

I used homemade sweet cherry butter for this Greta Garbo cake, but you can use any other kind of jam you like, I generally prefer using a less sweet variety. I think this Rhubarb Raspberry Jam or this Rhubarb Strawberry Jam would be a perfect fit for this time of the year. Plum jam or apricot jam would be great as well.

Otherwise for those Romanian speaking people reading this blog, I can only recommend Silvia Jurcovan’s cookbook, it really is a must-have for any Romanian person who enjoys cooking.

I have a few more recipes on Where Is My Spoon cooked out or inspired by Silvia Jurcovan, for example these Soft Chicken Meatballs in Cream Sauce, the Cauliflower in Tomato Sauce or the Romanian Sweet Bread with Walnuts – Cozonac. You might want to check those out, they are all delicious. 🙂 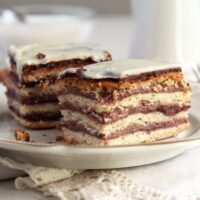 another gorgeous layer cake! i want to eat everything you make. :)

What a fun story and an amazing looking cake!

I so understand you :) :) I would add one more problem " take one package/ jar" something. How I should know how big was jar/ package of cream, quark... whatever in 1960??? :) :) But in the same time, it make this process more interesting, to test and improvise :) And I do not know (nowone to ask, anymore :(... ), maybe our cakes are absolutely different from originale.

Oh My Word! Look at those layers! Thanks so much Adina, for sharing this recipe from Silvia Jurcovan cookbook - I am mesmerized by those layers! I understand your frustration when it comes to "grandma's" measurements - my mom does the same thing too! :)

I know exactly what you mean. This is one of reasons I don't bake Romanian recipes. Faina cat cuprinde is the most annoying thing in a recipe. Even 50g can make a difference and with baking it has to precise. I hate the cup measurements too. The cake looks fab, I didn't know it. x