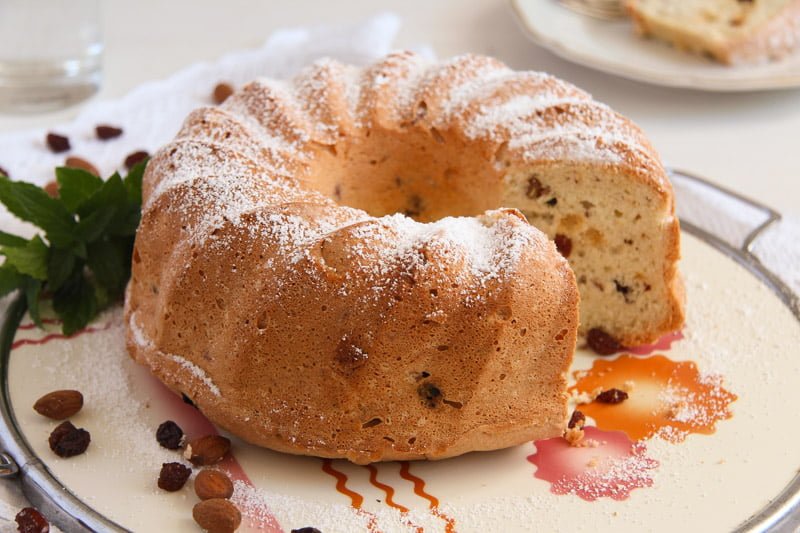 As promised yesterday this is the second recipe for the Saxon Bischopfskuchen, the egg white cake version with raisins, candied lemon peel and almonds. The Orange Bundt Cake with Chocolate, Raisins and Almonds uses whole eggs, while today’s version is a pure egg white recipe. 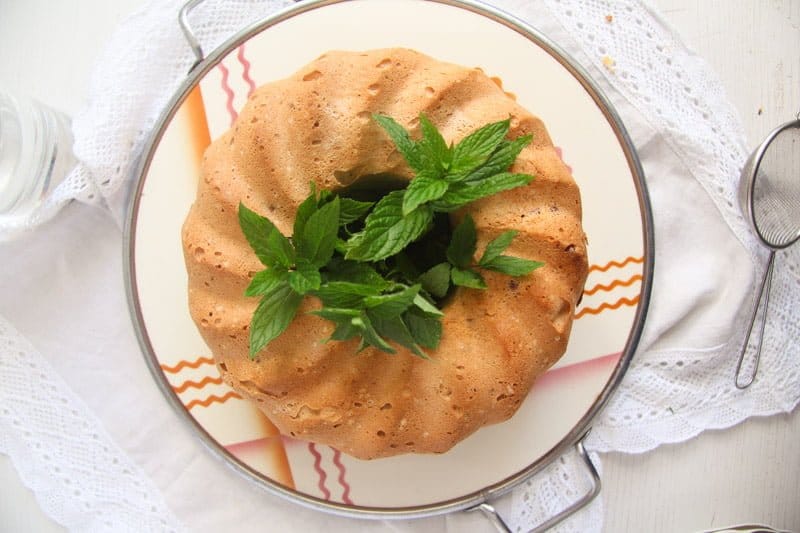 A great recipe for using up some of those many egg whites I always seem to have in my freezer, especially this time of the year when I often bake cookies using only egg yolks or make homemade egg liquor for which I need eight egg yolks…

As I feel sorry to throw away so many egg whites and I am not a fan of egg white omelet, there is only the meringue left for me to use up some of those many egg whites.

And from time to time such an egg white cake, similar to the American angel food cake, but a bit richer and interesting due to the addition of nuts, candied citrus peel and dried fruit.

So, if you like angel food cake, I think you will like this egg white recipe as well. 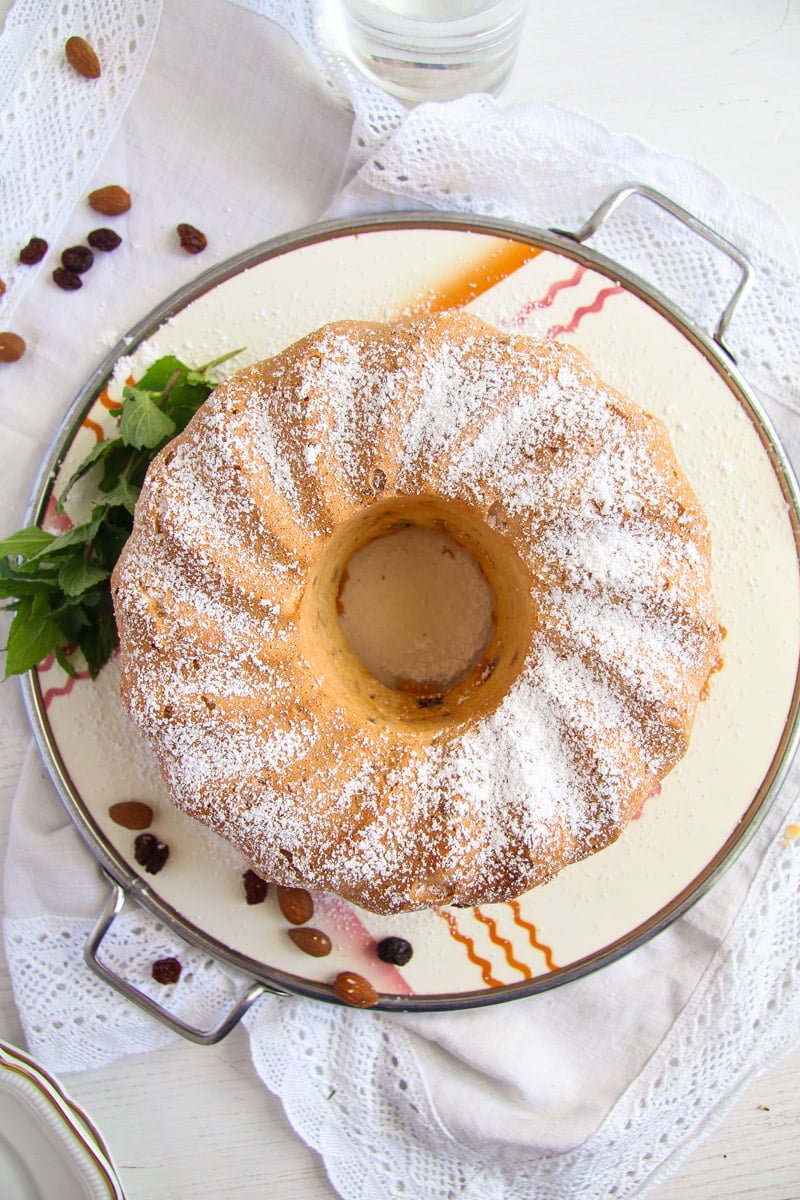 HOW TO MAKE EGG WHITE CAKE?

Just like any other bundt cake, this bundt egg white cake is super easy to make.

How to separate and beat egg whites?

Can I use frozen egg whites?

How to prepare the bundt pan?

For preparing the bundt cake pan properly for baking, have a look at the post for the Orange Bundt Cake with Chocolate, Raisins and Almonds, you will find detailed information on that there.

, there will be no need to prepare it, you can use as it is, without greasing it or anything.

Can I use another pan?

Of course, this egg white cake doesn’t have to be a bundt cake. You can bake the egg white recipe in a regular cake pan of about 24-26 cm/  9 – 10 inches diameter. 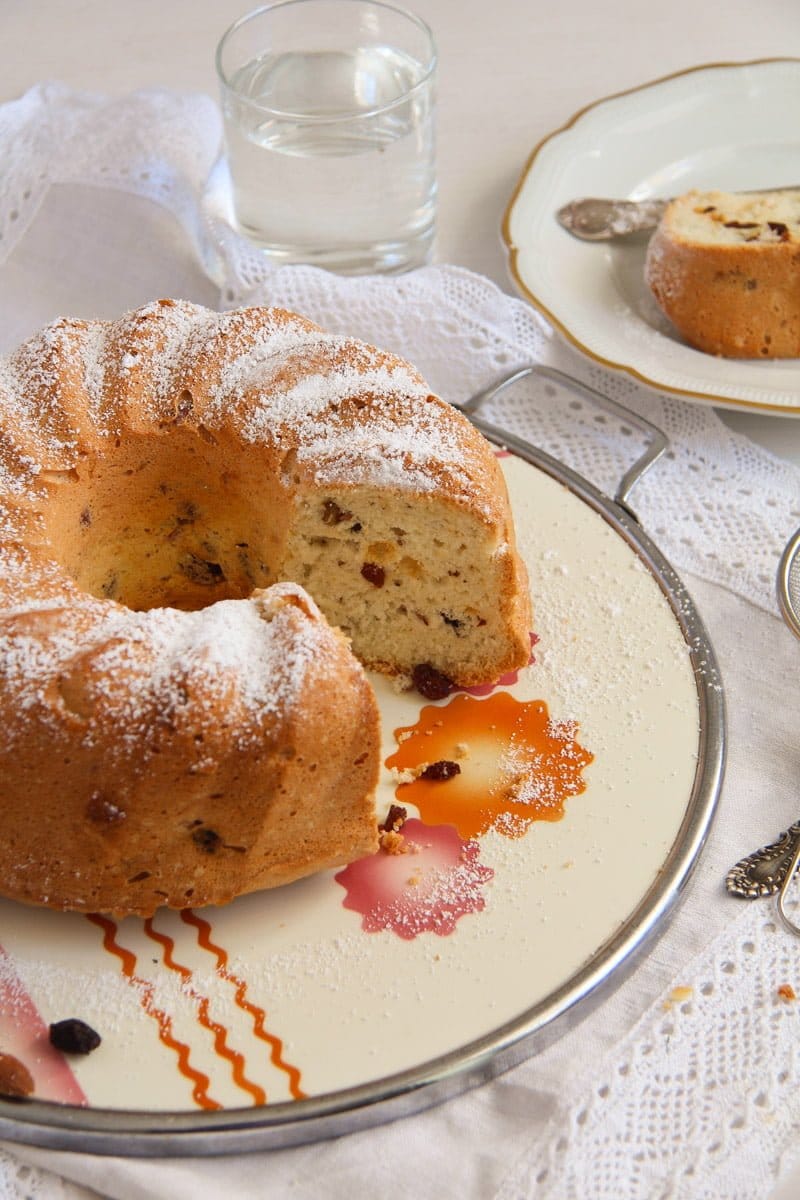 Can I glaze the egg white cake?

Yes. You will also find instructions for preparing the glaze in the same post mentioned a few lines above. If you would like to make that glaze, replace the orange zest and juice with fresh lemon zest and juice.

Alternatively, you can use another lemony glaze of your choice.

Just in case you have never baked a cake using only egg whites instead of whole eggs before, be aware that the egg whites do give the cake a very special egg whitey taste, if I can say so.

If you are familiar with Angel Food Cake for instance, you will know what I mean, otherwise be warned, the taste is quite different from your usual bundt cake. 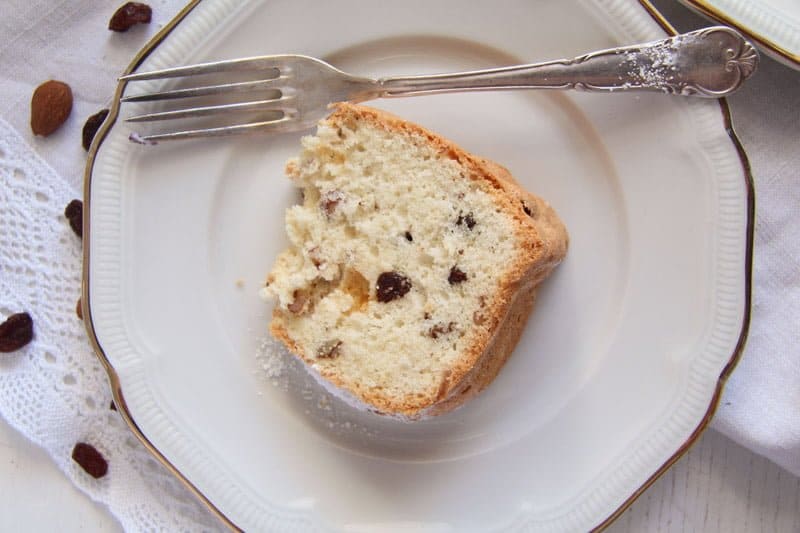 Save this for the next family gathering! Looks tender, light and delicious..

This is a great use of leftovers. I love how light this cake looks and the raisins and almonds add great flavor and crunch!

This is such a great idea because I hate throwing away egg whites when I need yolks. Plus, then I have an excuse to make this cake.

I have read the recipe several times now and can’t see where you added the melted butter. It doesn’t take 100g to grease the pan. When did you add it? I am going to add it with the flour and hope for the best.

Sorry about that Inge and thank you for bringing it to my attention. I read the recipes so many times before posting, but I still forget something sometimes and not even notice it. 🙁 But you were right to add the melted butter at that point. I hope it came out ok.

The cake came out perfect. I tried it as soon as it was cold. It really is good the way it is, but I may make a little lemon glaze anyway.
Thanks

Thank you for the feedback, Inge, I am so glad it came out well and that you liked it. 🙂 Ich wünsche dir einen schönen ersten Advent!

This is a great way to use up the egg whites I have in the fridge. However, I do not have a bundt pan, can I use an 8” cake pan for this cake?

Thanks, Adina. I ended up baking it in 2 loaf pans. It took around 35 minutes to bake. It smelled so good that we sliced it as soon as it was cool enough to handle. Will be making it again for sure.

So glad to hear this, Edith. Thank you for the feedback.

I saw melted butter in the recipe and instructions but I didn’t see the part when it was incorporated with the cake.

Sorry Joel. I have just updated the recipe, somehow that sentence is missing. Fold in after the flour.

delicious cake! My only change was to substitute america’s test kitchen’s baking mix for the flour and it turned out great! I had all of these egg whites from making lemon bars and hate to waste anything.

Hi Michelle. Thank you for the feedback, I am so glad you liked the cake.