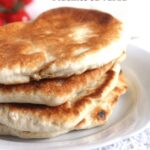 This kind of pies have a long tradition in Romania and the Republic of Moldova. I am not entirely satisfied with the English translation of “pie”, I feel that the word is not really suitable for this kind of small, yeasty “cake” or even flatbread, traditionally filled with cheese or with cabbage for a fasting time (vegan) version. However, in absence of a better word, I must go with pie.

The Romanian word for it “placinta” comes from the Latin word “placenta” which was the word used by Cato the Elder, a Roman senator who lived about 200 years BC to describe a kind of cake consisting of several layers of dough, cheese and honey.

Romanian cheese pies nowadays can be savory or sweet. The savory cheese pies or placinte cu branza come in the form of a small flatbread, thinly rolled, filled with a cheese and herb mixture and fried in a little oil in the pan. 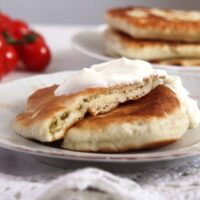 They look fabulous! I'm not from the US, but for me the first thought was "pancakes". Though pancakes are never stuffed... It's always difficult to translate foreign culinary vocabulary. The dough looks soft and fluffy, a bit like naans... I must try making them one day!

My best friend is also a Romanian and she was just sharing with me last week about the tradition of fasting, which I didn't aware of before. Interesting the thing you learn everyday. I love this stuffed pie/flatbread. Looked so good. I would have trouble staying away really!

These pies/flatbreads look very yummy!!! I would definitly give them a try. I had never heard before about the Greek monks diet, it's very interesting and it makes a lot of sense.

I would say it's a stuffed flatbread, not a pie. I had issues with the terminology too. It goes both ways, translating Shepherd's pie with placinta is not very precise either. :)) It looks delicious! x

This reminds me of Indian stuffed flatbread. YUM!