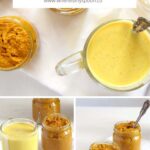 Turmeric is not only a spice, it is according to many sources one of the most important nutritional supplements ever. It is also one of the oldest traditional medicinal substances in the world. It has been used in the traditional Chinese Medicine or the Indian Ayuverdic Medicine, which are some of the oldest medical systems.

It was Marco Polo apparently, who brought turmeric to Europe in the 14th century, but for him turmeric was only a good substitute for the more expensive saffron. Unfortunately, turmeric did not get much attention in Europe, for many hundreds of years it was only used either as a substitute for saffron, as a food colorant or as dye for textiles.

However Western herbalists have started to recognize and study the health benefits of turmeric during the last decades and turmeric has become one of the most popular and most consumed spices at the moment.

The list of the many benefits of the yellow curcumin, the substance which gives turmeric its power is a very long one indeed. The studies regarding the properties of curcumin and its benefits in preventing or curing disease is still in its infancy, there are not many large scale studies that undoubtedly prove that curcumin has cured any of these diseases, but there is hope that further research and study will be able to find ways of demonstrating the power of curcumin beyond doubt and put curcumin to use against many ailments.

Thousand of smaller scale studies have already shown that curcumin can indeed be very beneficial. There have been lots of cell and animal research, which prove that turmeric has a good influence on a number of illnesses and also several human studies have shown positive results as well. There are other areas as well, where it is said that turmeric could have a good influence on, but keep in mind, I am not a doctor and have no medical education whatsoever. I have put this list together for you, but if you would like to start some form of therapy using turmeric, please talk to your doctor before you do that.

Personally, I do believe that the consumption of turmeric could only benefit my health, that is why I drink the Golden Milk and use the Turmeric Paste on a daily basis. And because I don’t want things to get boring in the kitchen, I started using the Turmeric Paste not only for making Golden Milk but I use it for lots of other drinks and dishes as well.

First of all here is the recipe for the Turmeric Paste for Golden Milk. It is one of the most popular recipe on Where Is My Spoon and I am very happy about it, people do seem to like it just as much as I do. It is very easy to make, quick and inexpensive, it tastes great in Golden Milk or in tea and, as am I just about to show you, there are plenty of other ways you could use it.

And here are five ways you could include the Turmeric Paste for Golden Milk in your food. Follow these recipes or let them inspire you in creating new ways of enjoying the Turmeric Paste. And if you find a combination you particularly like, do let me know, I would love to try it as well.

I will start with the Turmeric Plum Cake recipe and continue adding the rest of the recipes during the next couple of weeks. I hope you will enjoy them. Muesli with Yogurt and Turmeric Paste