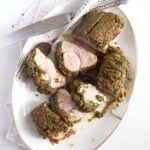 This pistachio-crusted pork tenderloin is another recipe using quite a lot of herbs, I have so many of them in the garden, I seem to be throwing a bunch or two of herbs in everything I cook these days.

We had some really nice sunny days followed by rain and so on and that’s really helping a lot in my garden, the herbs and the few flowers that I have are just bursting with life.

How to remove silverskin?

How to make the pistachio crust?

How to cook the pork? 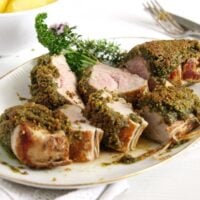 Adina! This looks spectacular. I'm really a pork fan and usually cook it on the grill, but this looks so perfect that I'm going to give it a try. AND, I must tell you that you have some of the best looking meat/dinner recipes out there. Yummy!

pork tenderloin is one of my favorite meats to prepare and a definite favorite to eat, so i'm always looking for twists--love the herbs here!

I remember when I always thought pork should be "white" as well and now I do know better. I love cooking with pork tenderloin and the herb crust looks great! I'm glad it turned out so deliciously and you posted this.