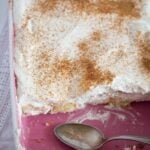 A delightfully creamy and aromatic apple tiramisu made with apple sauce, mascarpone, and cinnamon. And the best thing about it? You can prepare everything in about 15 minutes! A dessert worthy for company, but perfect for any day of the week as well.

I have made 12 jars of applesauce last week. And I could make at least 30 more, but there is no way I can find more room for the jars in my freezer.

There are so many apples growing in the trees in all the gardens and fields around here, there are always plenty, but I have never seen so many as this year. I have even heard of two apple trees breaking because they were so overloaded with fruit.

So, I have been making tons of applesauce, apple cakes, apple pies, apple muffins, and apple desserts, like this apple tiramisu. I have even used apples in my cooking, we had some great savory apple dishes these days, something like this vegan apple curry, for instance.

And if you like tiramisu, you could also try these Tiramisu Cups.

How to make it?

Rhubarb Crisp with Apples and Oatmeal 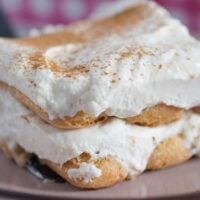 i've never really liked coffee-flavored desserts, but tiramisu is always so tempting. THIS is perfect! :)

What a delicious sounding fall dessert.

Tiramishu is my all time favorite dessert you know :) how are you btw??

I am fine, thanks for asking Priya. We're going on holiday on Sunday, so there is lots to do before we live, but I can't wait for it. I am so ready for holiday.:)

This sounds really delightful. It's also lovely that you have a lot of apples from friends.