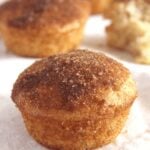 This cinnamon muffin recipe is very popular in our house. Just like these sour cream muffins or these strawberry muffins.

There is no easier way to make your kids thoroughly happy than presenting them with a nice donut or a nice muffin. And when the two things come united, well, you can imagine…

I made these muffins for the first time on a hot late summer day (a few years ago) when I had 7 kids running around the garden and the house. They were here for quite a long time and after one of the girls came in and asked for some sweets, I thought about making something to satisfy their cravings without filling them up with gummy bears or Kinder chocolate bars.

I had this recipe in mind for a while, so I immediately started. I was finished in no time and the children devoured all the muffins (except the one I ate) while still warm. Ever since, the cinnamon muffins became a staple in our house. 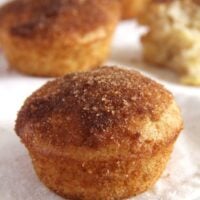 These muffins look so appetising and I was wondering why... but of course it's because of their doughnutey topping!

all the enjoyment of a true doughnut but with no hot oil! bravo!

Ahhhhh, all three of these look incredible! And the topping on those muffins look TO DIE FOR! Happy fall girl!

I can smell the aroma and taste of these yummy muffins...all the way in Canada.

Hi Adina - these look just lovely! It's apple picking season around here and what a fun way to use them up! Dipping them in butter with the cinnamon sugar sounds divine!