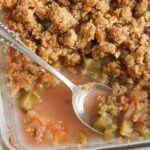 Amazingly aromatic rhubarb apple crisp with crunchy oatmeal and brown sugar topping, this is one of the best rhubarb desserts ever.

Make the most of the short rhubarb season with this tangy rhubarb apple crisp, which can be served either warm or at room temperature, as it is or with a nice vanilla custard or vanilla ice cream.

I do have a soft spot for this kind of dessert, either crisp or a crumble like my favorite apple crumble, a pudding with custard, like this Baked Rhubarb Custard or a fruit casserole like this Kirschmichel – Cherry Casserole.

Over the years I have made so many fruit crumbles or fruit crisps, I have really lost track of all of them. The one I make the most is apple crumble, apples are always so reliable and available, but when the season allows it, I make rhubarb crunch or crumble.

Difference between a crisp and a crumble?

Can you make the rhubarb crisp with frozen rhubarb?

How to freeze rhubarb?

I freeze a lot of rhubarb, at least 2 or 3 large bags every spring. And I use it to make all the above-mentioned recipes as well. 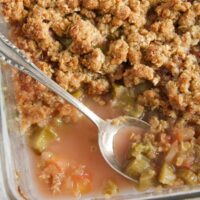 You can use only white sugar instead of a mixture of brown and white sugar. Just replace the brown sugar with the same amount of white sugar.

Oh my, can't really resist this, love the idea of putting rhubarb and apple together.

mmm...can't resist anything with streusel!

Are you kidding - 4.4 pounds of rhubarb? Really? Fix this recipe for beginners to use. Lauri