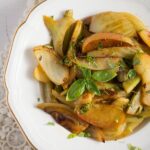 Braised fennel and apples in the pan or skillet, a quick and delicious side dish, perfect to try when the fennel is in season.

If you ever thought you are not much into fennel, you will be after trying this fantastic braised fennel recipe! This recipe for sauteed fennel and apples makes a wonderful side dish to serve with fish or chicken, it’s super healthy, it looks impressive (thus perfect for guests) and it’s ready in less than 30 minutes.

How to cut a fennel bulb? 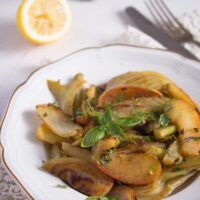 I was very interested in this recipe, but I’m going to leaving the site because it is an absolute circus of pop-ups and ads and I was unable to even view the recipe without the page jumping all over the place. Not against monetizing the blog but this has prevented me from staying and enjoying your content

@K, I had no problem…I hit jump to the recipe and was able to stay on the site without any issues and pop-ups.

This recipe sounds delicious and it looks amazing as well. I like fennel, so I think I'd like this dish as well.

I like the taste of fennel, but I never use it when cooking. I just haven't known what to do with it. Braised with apples sounds delicious and sounds like a good place for me to start with cooking with fennel.

I am a big fan of fennel! I enjoy them raw or roasted. Yours version with apples looks scrumptious, Adina.