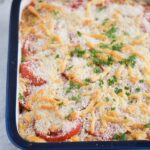 Cheesy and creamy tuna pasta bake with sweetcorn and white sauce made from scratch, this easy noodle casserole will make your children happy.

An easy pasta casserole is something you often chose to cook when you have children. Casserole dishes, like this creamy tuna pasta bake, with rice or potatoes are filling, easy to make, cheap most of the time, and probably due to the carbs and cheese they contain, you can never go wrong with them when it comes to children.

I think I have rarely managed to make a casserole they didn’t LOVE. Even those casseroles containing cauliflower or broccoli are more or less fine for my children, as long as they have enough cheese in them…

It is the same with this tuna pasta bake. Tuna is not an ingredient of choice when it comes to my children, but packed into this creamy and cheesy noodle casserole, the tuna loses its “impudence”, becomes a desirable ingredient that imparts flavor and creaminess into the dish.

But don’t think that this noodle casserole is just something for the children, you will probably end up eating more than you should yourself as well. And scratch the bottom of the dish to make sure you get every last bit of those delicious noodles or corn kernels surrounded by that creamy cheese sauce.

Very common and very cheap ingredients like tuna, noodles and corn, all things you might probably have in your pantry already. Staple ingredients, so to say, you might not even have to go shopping in order to cook this recipe.

And the best thing about it is that you will be making this from scratch.

The recipe step by step 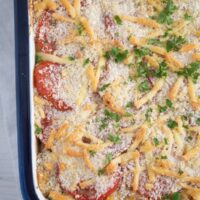 So simple yet so nourishing and delicious!

What a beautiful tuna casserole Adina. No wonder your kids love it. I like that there are fresh ingredients and canned, so it's not too much chopping and cooking etc. Looks fast and easy and I love that it uses all real ingredients. What a great recipe using just a few staples. Wishing you a beautiful day, still freezing cold around here! XO