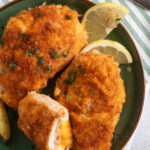 Easy cordon bleu schnitzel with chicken breast, baked in the oven, crunchy and oozing with cheese, delicious and less fussy to make.

Schnitzel with Ham and Cheese

What is cordon bleu?

Stuffed meat fillets usually made with thin fillets of veal or pork, filled with cheese and ham, breaded and deep-fried. Usually, you will have a thick roll oozing with melting cheese and crispy due to that fried breadcrumb coating. An easier version would be to fill a smaller piece of meat with ham and cheese, bread the meat, then pan-fry it. Still using lots of oil, even if you are not deep frying.

How to make quicker and easier cordon bleu schnitzel?

This is my version of a cordon bleu: a healthier, cheaper, quicker, easier. Taste? Amazing!!!

How to serve the stuffed schnitzel?

Our favorite side dish is always oven-baked potato wedges with some chili sauce on the side. And a green salad with yogurt dressing. I never feel like I need to have any sauce with cordon bleu schnitzel, but do make some if you like it.

In spring I often make sauteed asparagus, while in winter I would go for some roasted Brussels sprouts and potatoes.
If I don’t have any fresh veggies, I choose to make French-style green beans or buttered green peas because I always have them in the freezer. Mashed potatoes, garlic noodles, or even rice are suitable side dishes as well. 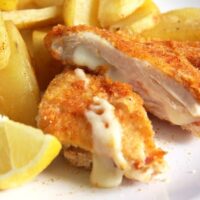 I use Gouda, but Cheddar or Swiss cheese would also be great.

One of the best recipe i've ever tried. My family loved it. Thanks a lot for sharing <3

Just the thing I'm looking for :) Does any of the cheese ooze out when cooking? Im wondering what holds the construction together when flipping it over? THnaks

Hi. It oozes a little, you can see it in the picture of the chicken on the baking tray. But it is not like all the cheese oozes out, just a little bit. Make sure that you cut the cheese and ham slices slightly smaller than the meat, so that all fits inside and the breadcrumb coating will hold everything together. I hope you like it. :)

I was just talking to my husband the other night that I'm really craving some chicken schnitzel. I never tried a baked schnitzel, but this one looks perfect! I'm craving it even more right now, so I'll know what I'll buy the next time I go shopping for groceries. :)

This Chicken Schnitzel looks incredible, Adina! I just had dinner but looking at these photos are making me hungry again!

This looks delicious! Your grandma does sound like quite a character, I'm glad you pushed back and embraced your creativity in cooking.

Thank you, Meghan. She tought me to enjoy food and cooking, but her inflexibility in this area also increased my curiosity and desire to try something new all the time.