Traditional German schnitzel or Jägerschnitzel made with boneless pork chops and served with a delicious mushroom sauce.

This is the most popular German schnitzel there is, I suppose. A crispy fried pork schnitzel with the best mushroom sauce ever. I am not kidding: the schnitzel is great, but that sauce is worth all the money!!!

Welcome to another Where Is My Spoon little series, this time featuring Schnitzel, a staple in German cooking, something you will find in every restaurant in Germany, well maybe not in an Asian or vegetarian restaurant, but otherwise pretty much everywhere.

And the first recipe is a German classic: Jägerschnitzel, jaeger schnitzel or Hunter Schnitzel, which is a pork schnitzel cooked in the typical way and eaten with a particularly delicious mushroom sauce. And fries, never forget the fries!

How did I get the idea of cooking so much schnitzel recipes lately?

My son said one day he would like to eat schnitzel, so I thought, why not? Let’s do schnitzel. While looking for a recipe for this sauce, I found so many related recipes that I thought I’d love to try and I knew this could turn into a series.

We overdid it with eating schnitzel during the past 6 weeks, but trust me, nobody complained. Actually I am pretty much sure they were all happy with me cooking something “normal” and meaty for a change….

So, make sure you try some of the other schnitzel recipes, either the big classic Wiener Schnitzel, the chicken schnitzel or the oven baked schnitzel.

HOW TO MAKE GERMAN JÄGERSCHNITZEL?

What meat cut for schnitzel?

How to bread the schnitzel?

This is a classic recipe for making schnitzel, nothing fancy, you just have to bread the meat and fry the schnitzel in a pan.

How to fry the schnitzel?

The sauce is called Jaeger sauce – Hunter sauce, due to the mushrooms you need to make it. I suppose the idea is that mushrooms grow in the woods where the hunter hunts… A simple explanation. 🙂

HOW TO MAKE JAEGER SAUCE FOR SCHNITZEL?

HOW TO SERVE JAEGER SCHNITZEL?

The classic German schnitzel is served on a large plate with the mushroom or jaeger sauce on top of it.

You can do that, but I prefer to place the sauce next to the schnitzel, this way the breading remains crispy for longer. But that’s a personal choice, you can do whatever you like.

In a restaurant you will always get fries on the side. I like that, but I am not a fan of making fries (waaaay too much trouble), so I prefer to serve the Jägerschnitzel with oven roasted potato wedges. I like them better than fries, they are much healthier and easier to make.

A green salad or a mixed salad where you will be served different salads like white cabbage salad, carrot salad, green bean salad and maybe a few tomato slices are also very common side dishes for the German Jägerschnitzel.

And don’t forget the lemon slices and the very cold beer.

What I personally like the most about this recipe is the jaeger sauce, absolutely my thing. I could imagine eating it not only with schnitzel but as a ragout with boiled potatoes or on top of rice or pasta. You might want to double the ingredients in that case.

How to Make Oven Baked Schnitzel

Chicken Schnitzel with Ham and Cheese 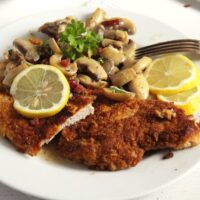 How about ZIGUNER SCHNITZEL AND SERVING W/BRATKARTUEFFEL AND CUCUMBER DILL SALAT?

Sounds great! :) Is that a request? I could put them on the "cooking for the blog" list.

Just made this for the first time after eating it in Berlin 8 weeks ago a total triumph a job well done! And if I don't say myself I even think my hunter sauce was more delicious than I had in the restaurant

So happy to hear this, Wendy. Thank you for the feedback. :) (I find this sauce to be better than the restaurant version as well, it is freshly made and uses no sauce powder or canned mushrooms.)

Yes, Colleen, I tried both, it works very well, I actually make it more with chicken than pork... :) Give it a try, I think you will like it! :)

Have you ever attempted to make with turkey or chicken?

I've never made schnitzel, but this looks so good. My husband would die for this!

A favorite with my husband as well!