A luxurious dish of white asparagus with sauce hollandaise, this recipe celebrates its short season in Germany. 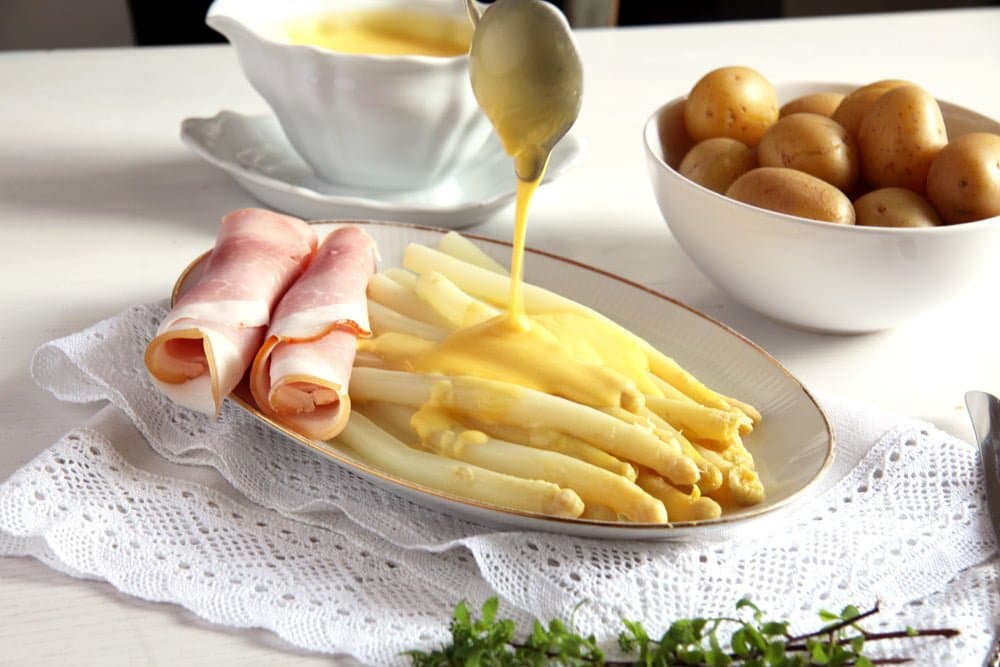 This is a spring produce I happily anticipate every year. I know one could buy it out of season from time to time, but to tell you the truth I never did, I only eat it when in season, I don’t even crave it in winter or autumn.

And when I do buy it, I always try to buy our local produce, maybe a bit more expensive, but oh, so much more delicious!!

There are these funny little cabins appearing all around Germany during this time of the year, in the form of a huge strawberry, and that is where we can buy local asparagus and, a few weeks later, strawberries. Later on in summer, other kinds of berries as well. All from the fields in the region.

Compared to other countries where green asparagus seems to be the more popular sort, in Germany white asparagus enjoys a higher position. And white asparagus with sauce hollandaise is THE recipe! 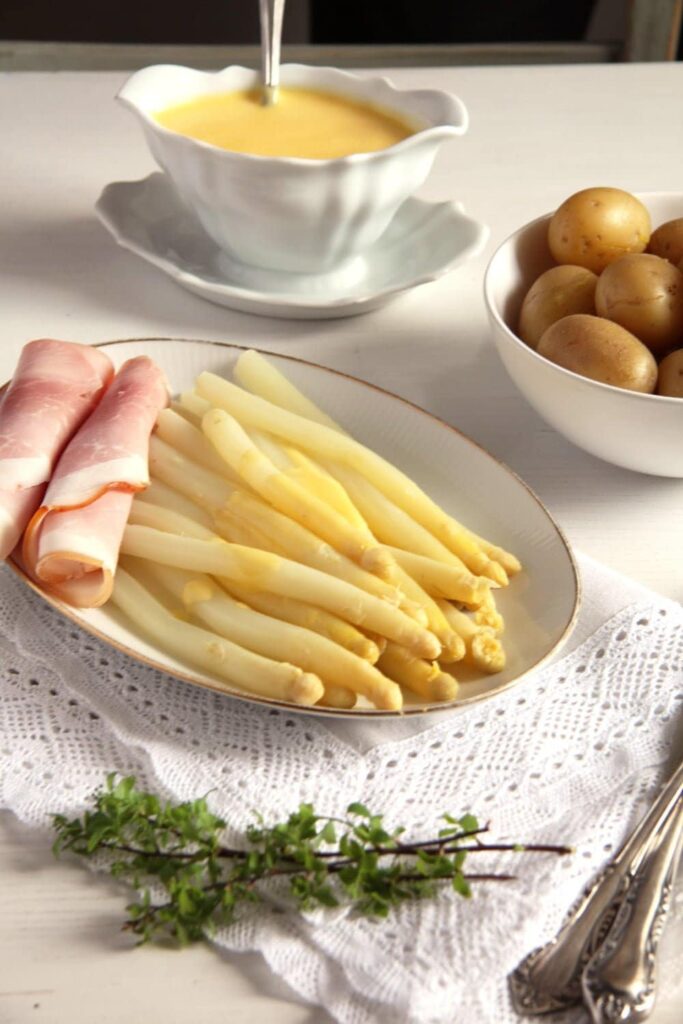 Differences between white and green asparagus 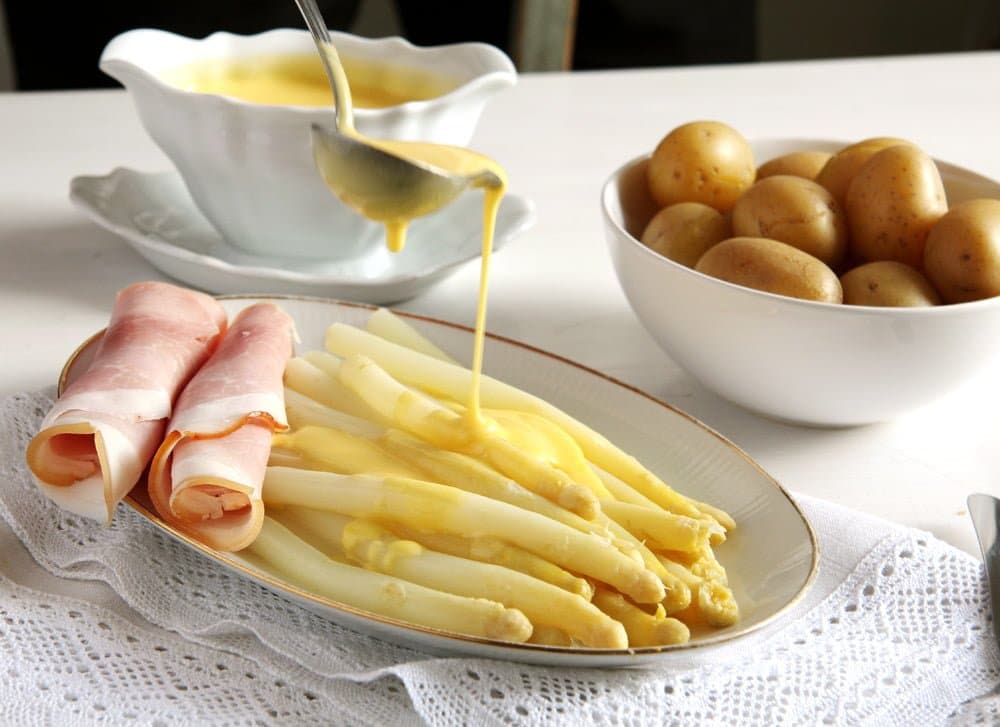 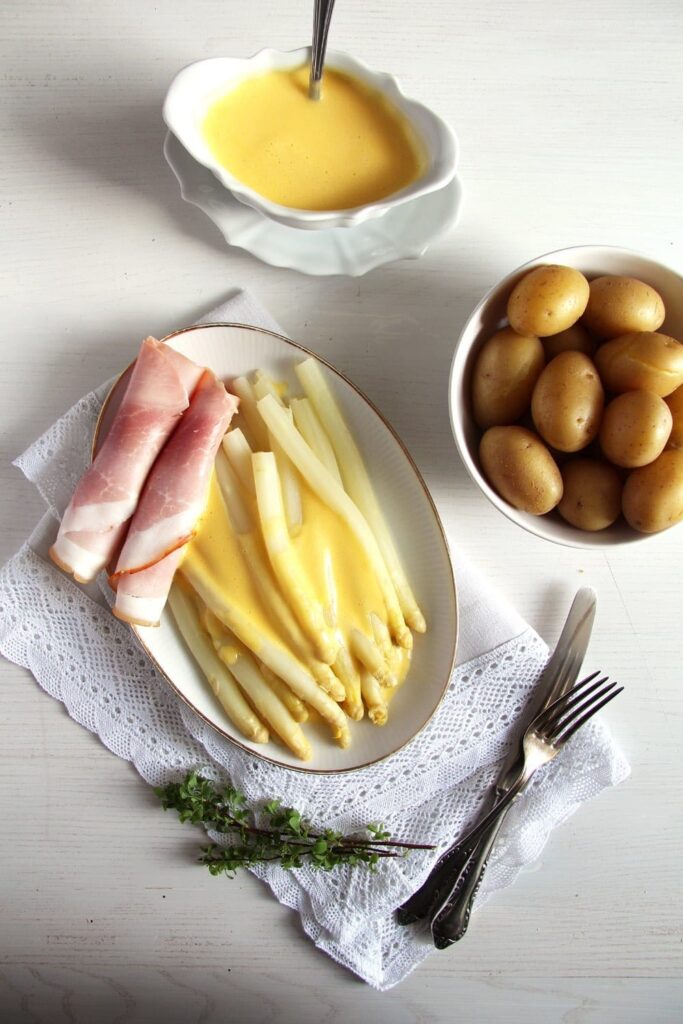 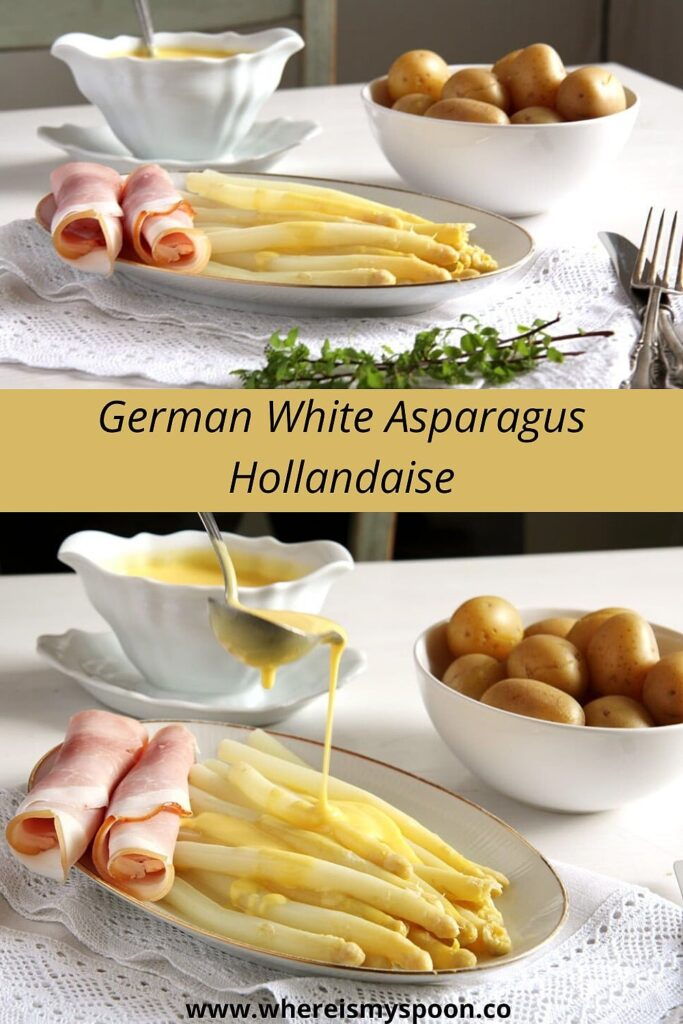 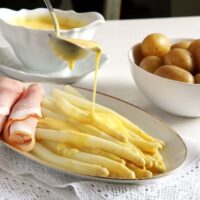 Green asparagus can be used instead, but white asparagus is traditional.

I had the pleasure of eating this wonderful meal as I was visiting a friend in Germany a few springs ago. Her mother prepared it for us. Every few months I think of this meal! I am excited to make it! Thank you for sharing ☺️

Hi Zara. Thank you for your comment. Let me know if you liked it.

Very confused about the butter- you don’t really specify how much butter is used where. Also, you said to add egg yolks to that butter/vinegar shallot mixture and then add butter to it once it’s cooking? So confused

Of course I do. The butter amounts are specified in the ingredient list, clearly 1 tablespoon for cooking the asparagus and the 250 g for the sauce, there are 2 ingredient sections to make it easier. I never said you have to mix butter and vinegar and then add egg yolks and also there is nowhere written to add butter once it's cooking. You melt the butter for the sauce and leave it to cool slightly while you make the rest. In the meantime, you cook the shallots and vinegar in another pot. You sieve this vinegar reduction into a bowl and whisk with the egg yolks on bain marie until it thickens. Remove from heat and NOW slowly whisk in the butter you melted before.

I am jealous of that white asparagus. I was in Germany one year at Spargelfest time and it was amazing. Lots of restaurants around Heidelberg had Spargelspeise where everything on the menu was with asparagus. I'll never forget it and haven't had asparagus that wonderful since. Your sauce looks amazing. I wish I was having dinner at your house Adina :)

I've never been to a Spargelfest, but I'd love too. Maybe when the children are older, they would only nag now if there was only asparagus on the menu... :) You can visit us anytime you are in Germany again and we can have lots of asparagus if the season fits. :)

This looks amazing! What a treat for when asparagus is in season. I have never cooked white asparagus at home; time to look for it! Thanks for the inspiration.

I hope you find the white asparagus, it tastes really nice, especially with sauce hollandaise. :)

I love both asparagus and hollandaise sauce! I didn't know that white asparagus required a longer cooking time than green. I most often get green asparagus around here, but both are lovely. Great recipe :)

Thank you, Dawn, nice of you to stop by. White asparagus is normally thicker than the green one and the peel is rougher, that's why it needs a longer cooking time.