How to make the famous Wiener schnitzel, the original Austrian schnitzel made from veal.

Here is the mother-of-all schnitzel, if I can use this expression when talking about food.

The real, original Wiener Schnitzel, an Austrian classic, the upper-class version of the popular German schnitzel, finer and more delicate than the German version (I like the German version just as much, but there is a difference, of course), but also three times as expensive.

About the Wiener Schnitzel

The main and probably only difference between the Wiener Schnitzel and the German schnitzel is the meat we use: veal for the Wiener original and pork for the German version.

The name Wiener Schnitzel is actually protected by law, meaning that only schnitzels made with veal can be called Wiener Schnitzel. It is not something we eat often (OK, it was the first time), like I’ve said, veal is pretty expensive and actually not so easy to come by. I had to order the meat in advance at the butchers in order to make the Austrian veal schnitzels.

The origin of the Wiener Schnitzel is controversial. Some sources claim it to be a better version of the Cotoletta alla Milanese (which are basically breaded chops), brought to Austria by the field marshal Radetzky sometime during the 19th century. And talking about Italian veal recipes, you should try these delicious Veal Escalopes (in Lemon Sauce) and the Veal Marsala.

Other sources claim this to be just a legend and insist the Wiener Schnitzel be a creation of the Austrian cuisine, which has an affinity for fried goods anyway.

Where the truth lies is not important, I think. I am sure the Italians love their cotoletta alla Milanese just as much as the Austrian people love their Wiener Schnitzel, and I would never say no to any of the two versions.

What to serve it with? 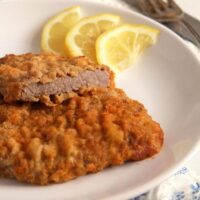 It is so hard to fry these just right. Yours looks perfect! What a great meal!

Always love to try continental flood but since I am vegetarian ,I have very limited options..Please suggest some !eat alternative

I know these last two weeks have been very meaty here, but I can tell you that during the next few months, there will be lots of vegetarian recipes coming. I had enough schnitzel now, don't need to see one till next year. :) :)

Love all the European dishes. And this wiener schnitzel looks delicious, Adina. Such a delish share!

I learned how to make Schnitzel when I was in Germany, but haven't had one since. This looks fantastic. I love all of your different variations of such a classic European dish. Thank you for sharing.

Thank you for commenting Liz. :)