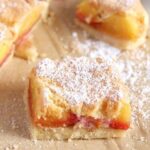 Nectarine cake made with six ingredients, this is our favorite nectarine recipe. It can also be made with fresh peaches.

The best nectarine cake: an easy to make base, covered with fresh nectarines or peaches, and topped with a delicious egg-sugar layer, this is our favorite nectarine recipe.

A glorious summer morning today! I brought my daughter to the kindergarten taxi and just got home now. I can really hardly imagine a more beautiful summer morning.

It has been raining last evening and night, so the temperature has dropped slightly, but although it is still warm and sunny the air smells so nice and has a fresh touch about it. My favorite hours during the hotter summer days! 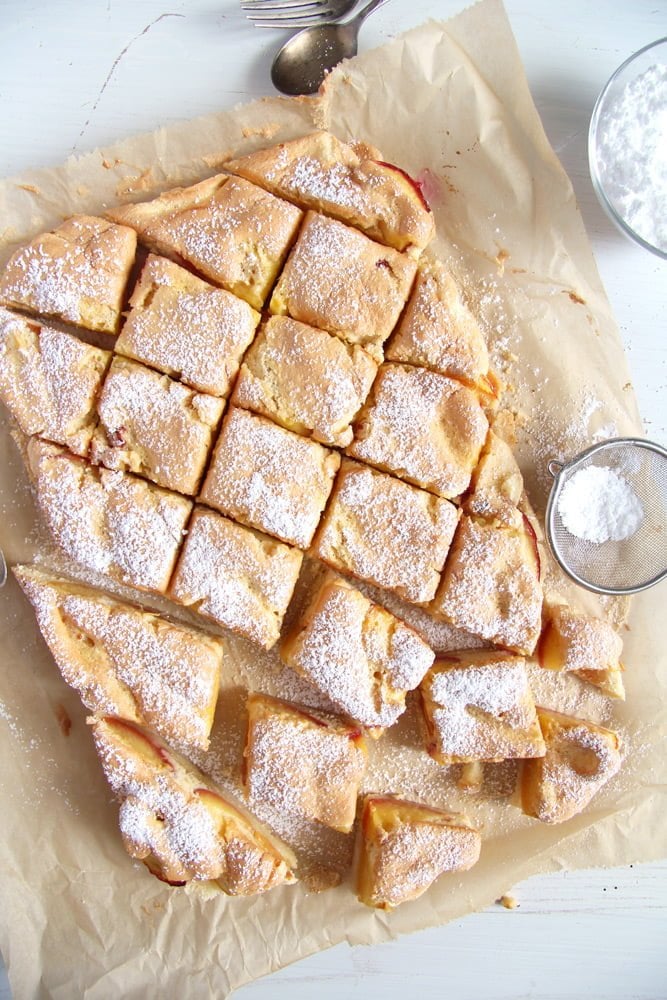 And such hot summer days are perfect for enjoying today’s nectarine cake (or peach). Well, if you manage to turn on the oven… 🙂 And if you don’t manage to turn on the oven, you could make one of these so-called “refrigerator cakes”, something like the Blueberry Lemon Curd Cake, my favorite Apricot Cake or the Romanian Biscuit Chocolate Salami. Or this newly discovered Nectarine Cake or Tart.

This summer nectarine dessert is light, it can be eaten from the hand and although sweet and comforting in a cakey-kind of way, it is still fresh-tasting and summery due to the many peaches or nectarines you dump on top of it.

And like I have mentioned above, this recipe only needs six ingredients, which makes it a super cheap dessert now when the nectarines and peaches are so abundant. 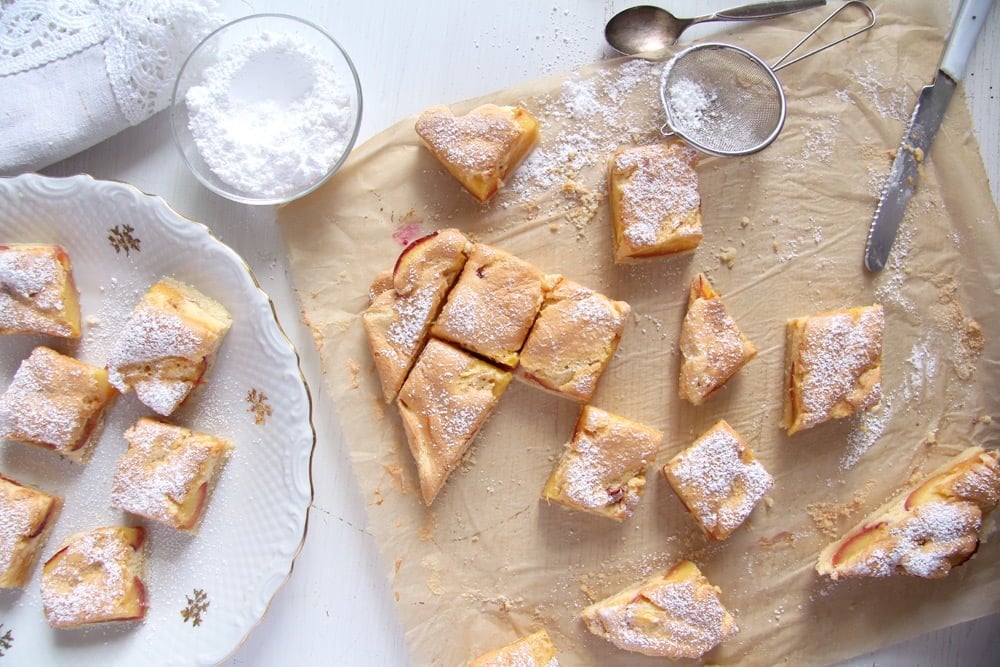 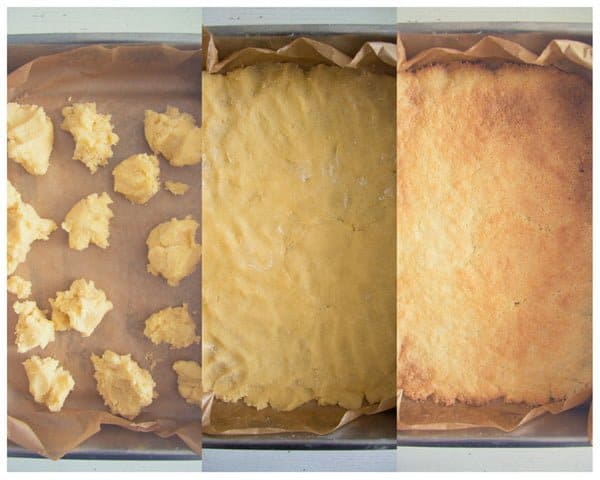 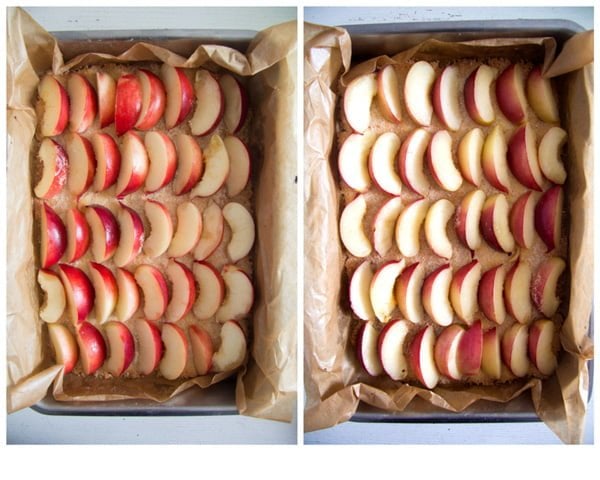 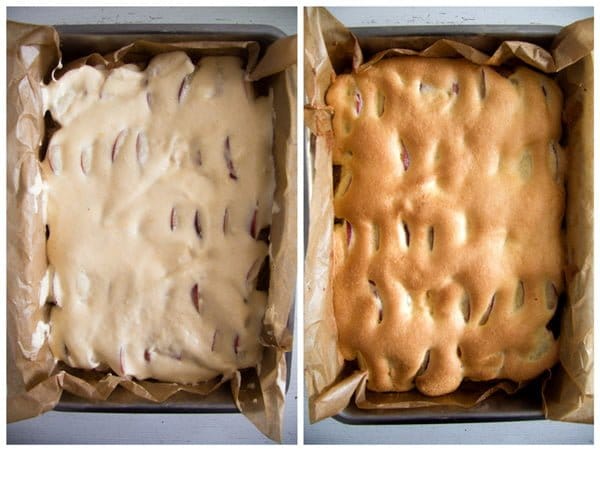 This nectarine recipe has its origin in Sanda Marin’s Cookbook, which was first issued in 1936, so it is quite a vintage Romanian recipe, I would say.

However, as it was usual during those times (and later times as well to be honest), the recipe instructions for making this nectarine recipe were very vague. The whole affair is explained in about 10 sentences… an absolute nightmare!

What I’ve missed most were the instructions regarding the baking times, there are three different baking steps after all and it is quite difficult to guess when the first layer or the fruit is done and so on.

So, I have baked this cake three times already just to make sure I got those times right. Nobody complained though, they all loved it, it was gone within one day every time. 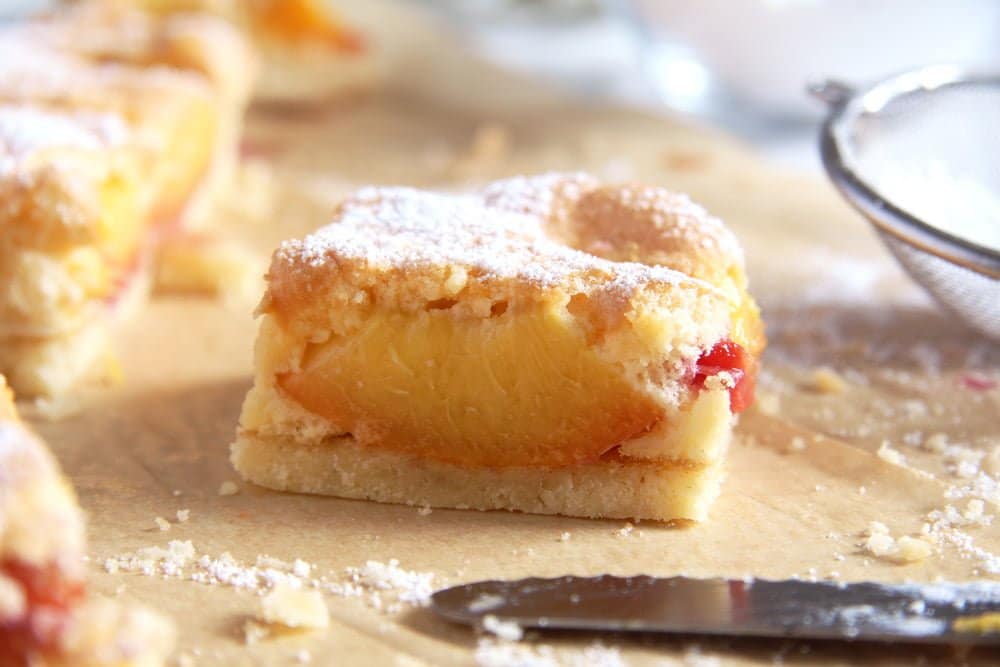 Fast forward to Juli 2018. I made this peach or nectarine cake again and took pictures of the different baking stages. I just wanted to say that it was gone in less than 5 minutes.

It only had the time to cool slightly after coming out of the oven, so it came rather warm on the table. It was a battle… I have never seen any dessert go so fast!

The only change I’ve made was to bake the base for 3 or 4 minutes longer than last summer. This way we had an amazingly crispy base topped with juicy nectarines and a soft and sweet batter. The perfect summer cake! 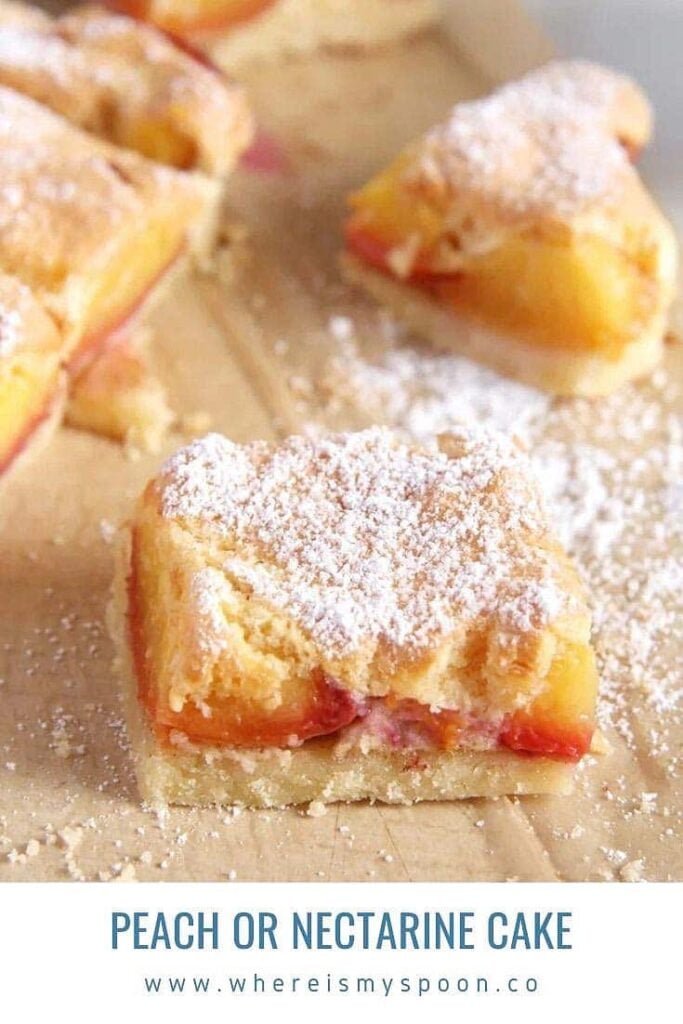 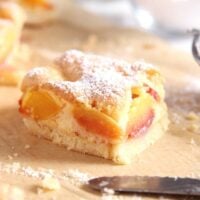 The cake is awesome however I used a adjustable baking frame to get the same dimensions mentioned in the recipe and I did not have enough batter, not for the base nor the topping. I would advise to make 1/3 more of both. Otherwise the cake is great!

I'm ready to jump into this. I LOVE how you've written the recipe, it should be a standard.. so easy to follow. I have peaches coming out my (ears) but am afraid they might be too ripe and overwhelm the cake with juice. Well, only one way to find out I guess! I can always chop it up, call it strudel, haha. Folks won't know the difference. Thank you for your (obvious) passion and care. It shows.

Hi Liza. Thank you so much for your nice words.

I tried to substitute Country Crock Almond butter (non-dairy) and the dough was dry so I added a couple tablespoons of LOL butter. That helped. But the dough cooked up a bit hard. Any suggestions?

Hi Jean. It might be the butter. I am afraid, I don't know country crock almond butter or lol. Also, the oven temperature might have been too high (ovens are different) or the cooking time too long.

I made this today and was disappointed. The top is very eggy, it was like scrambled eggs on top of a cake. The base was nice. Nectarines don't have that much taste when they're cooked so it wasn't an overly flavourful cake. I turned the oven down to 160C during cooking the topping as it was browning too quickly. Needed a couple of extra minutes cooking time instead.

@Robyn, sorry, something obviously went wrong. You didn't forget to mix the eggs with flour? Otherwise, I cannot imagine why they would scramble. The temperature depends very much on your oven, some get hotter than other. And regarding the taste of the nectarines, can't help there. I love them and I find them very flavorful. Maybe you just got low quality produce.

Hi Jasna.There are 4 eggs, 1 goes in the batter and 3 in the topping. The cake and the topping ingredients are listed separately, actually to make things easier when following the recipe.