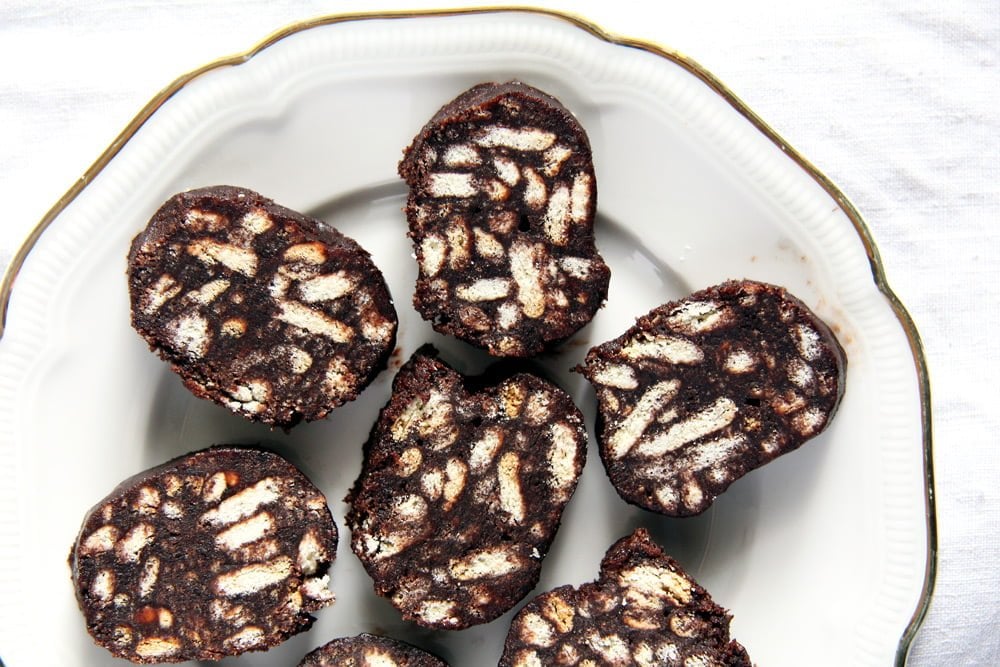 One of the most popular Romanian desserts – Biscuit Chocolate Salami – Salam de biscuiti, a no bake cake with biscuits and cocoa that makes children happy.

The biscuit salami with chocolate was the first cake I have ever made on my own. I was 11, in the fifth grade and we learned to make this cake during the “Manual Labour Classes”, that is really how they were called. During these classes all the girls went to a special classroom equipped with a stove, a fridge and a sink, a sewing machine and lots of sewing supplies, wool and knitting stuff and so on.

The boys would go to another classroom or better said a workshop where they would work with wood and stuff like that. 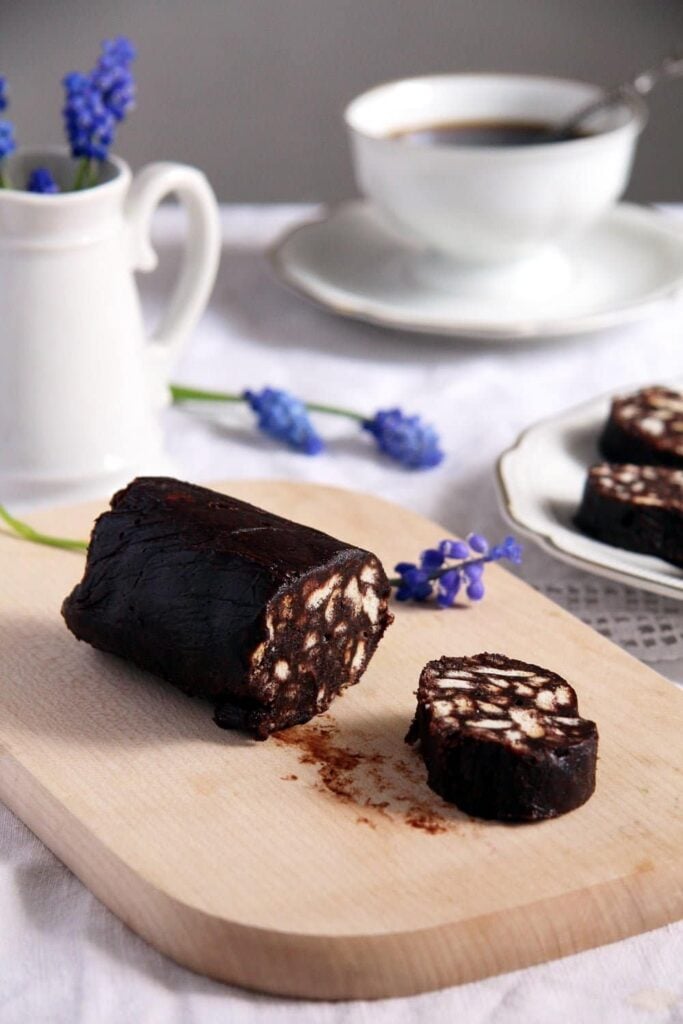 While I never got the hang of sewing, I did enjoy the cooking classes and I have also learned how to knit and crochet pretty decently for an eleven year old girl. Another bonus of these classes was that we were only girls there, boys were a plague during those days… 🙂

And I remember vividly the first time the teacher showed us how to make one of the most popular Romanian desserts, the Biscuit Salami or Salam de biscuiti.

I was not much into sweets then, I rarely ate anything sweet and had no interest in cakes or anything containing chocolate, but this Romanian dessert was something different. It might have been the fact that we had made it ourselves or the child-appropriate ingredients it contained, things like biscuits and cocoa, I don’t know, but I loved it. 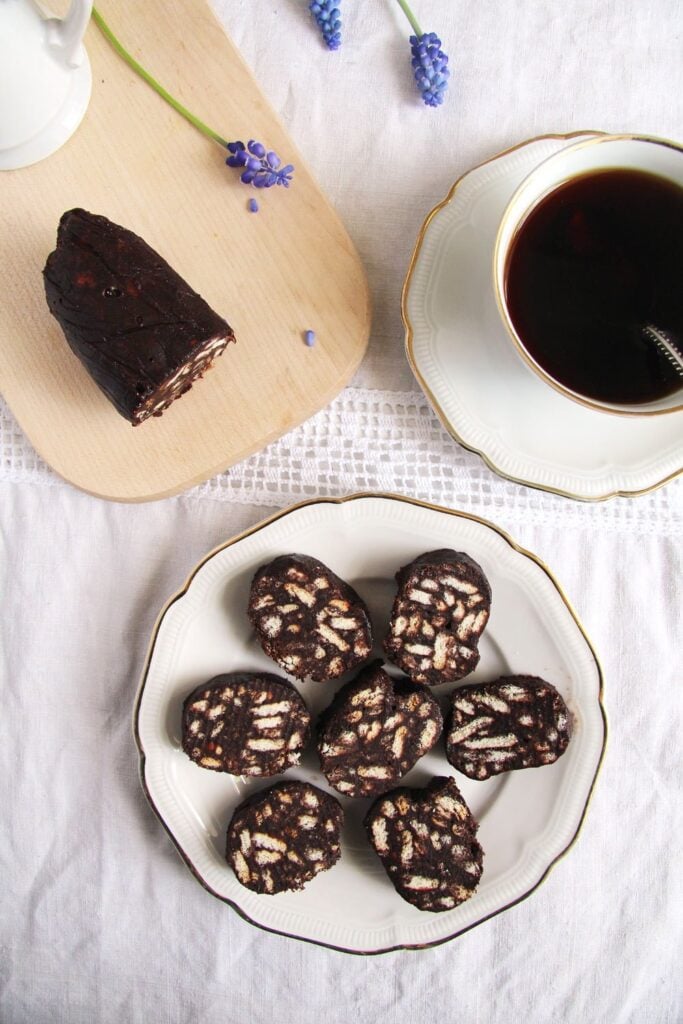 The recipe for the biscuit salami with chocolate (actually cocoa) was the first recipe I’ve ever scribbled down and I remember pleading with my grandmother to buy some real butter (she would only use margarine) so I can make this Romanian dessert myself at home.

She gave in and bought the butter but refused to help me (she didn’t like this cake or any cake at all, so she would not have anything to do with it), so I made the biscuit salami one afternoon while she was at work. It worked wonderfully, it is really so easy that an eleven year old can make it without any help. And I was so proud!!!

I have made it several times again afterward but then forgot about it. When my son was about 2 or 3 I’ve made it again, but he didn’t like it (he was too young, I suppose), so then I forgot it again.

Recently I’ve remembered it again and decided it was time to give it another try. And I so loved it! Really, every bite was full of sweet memories, I could see that classroom again and remember some of the girls I haven’t seen or thought about in more than 25 years, I could remember my grandmother’s kitchen and the way the butter was melting in the pot.

And this time Bruno loved the biscuit and chocolate salami as well and insisted that I make it again soon. 🙂 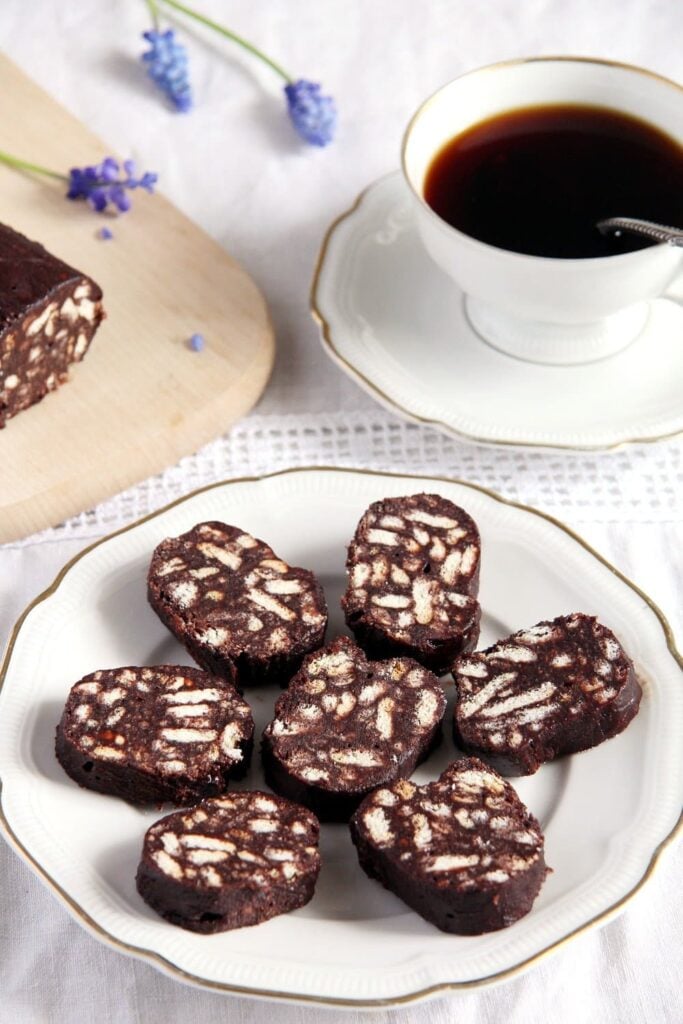 INGREDIENTS FOR THE BISCUIT CHOCOLATE SALAMI

Unfortunately this recipe is not the one I got when in school, that got lost at some point. But it is very similar, at least the taste is exactly the way I remember it. I only know that the old recipe was somehow different because I remember melting a whole pack of butter as a first step when making the Romanian chocolate salami. This recipe uses a lot less butter though, which is fine with me, if I can get the same taste and consistency with only haft the amount of fat is wonderful.

or Petit Beurre . Any other similar (and cheaper) brand is fine.

, the sweetened one would make this Romanian dessert way too sweet, and I am not even sure if that would work at all, sweetened cocoa powder has a completely different consistency.

I didn’t like the taste of rum aroma or essence

as a child, but I love it now and I never leave it out of this biscuit chocolate salami anymore. However, it is optional, use it if you like it, leave it out if you don’t.

The no bake Romanian biscuit salami or Salam de biscuiti opens a new series on Where Is My Spoon as well, the next two weeks will be dedicated to some of the most popular cakes in Romania, cakes that most Romanian people know and love.

Cakes like this Romanian Biscuit Salami, Romanian Meringue Brownies – Negresa, Romanian Lemon Cake – Lamaita or Alba ca Zapada, the Walnut Chocolate Buttercream Cake or Queen Marie – Regina Maria and so on. I still have a few spots open so in case you want me to try a particular Romanian cake for you, you could let me know. 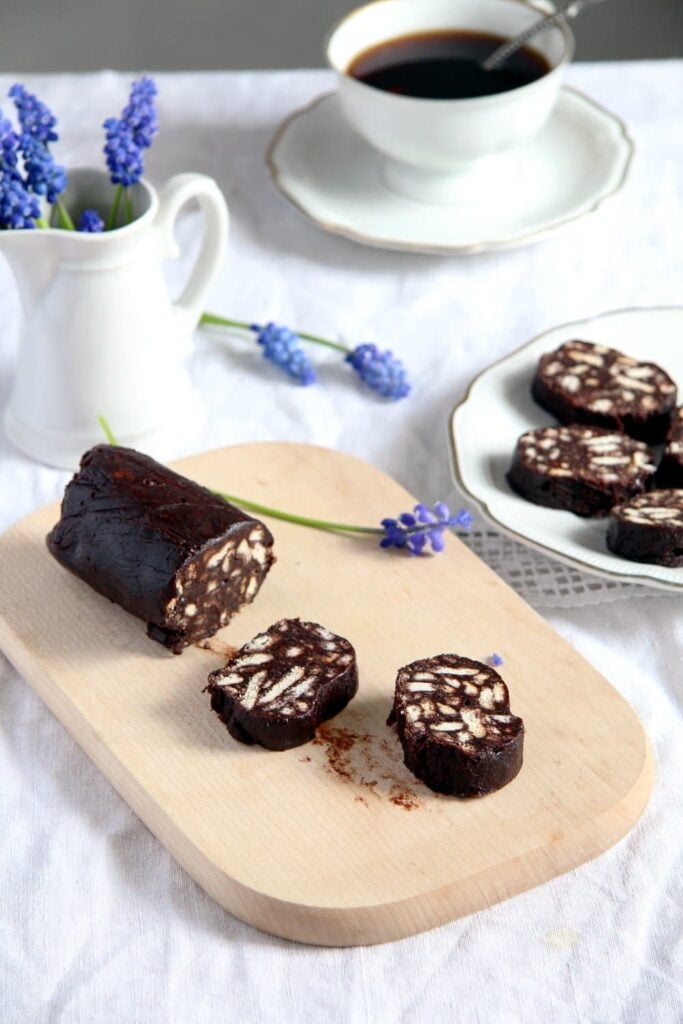 Break the butter biscuits with your hands into smallish pieces. Place into a bowl.

Place the milk and sugar into a small pot and bring to a boil, while stirring from time to time. Boil for about 1 minute. Add the butter and stir until melted.

Take off the heat, add the cocoa and the rum aroma and stir well.

Cut two pieces of plastic wrap/cling film. Divide the mixture in two and place each batch on one of the cling film pieces. Form a rough sausage (as thick as you like it) and wrap it carefully into the cling film to form a “salami”. Repeat with the second batch.

Places the rolls in the fridge until they are firm, for several hours or overnight. Slice before serving.

You can use real rum if not serving the Romanian Biscuit Salami to children. Or you could leave this out altogether, it is optional, but most people like it. 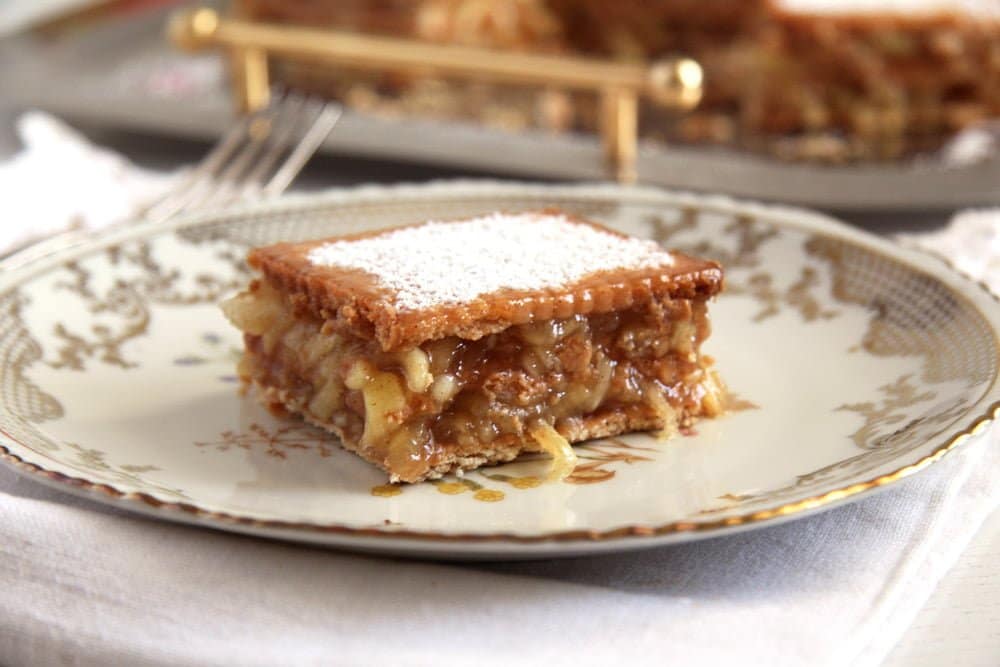 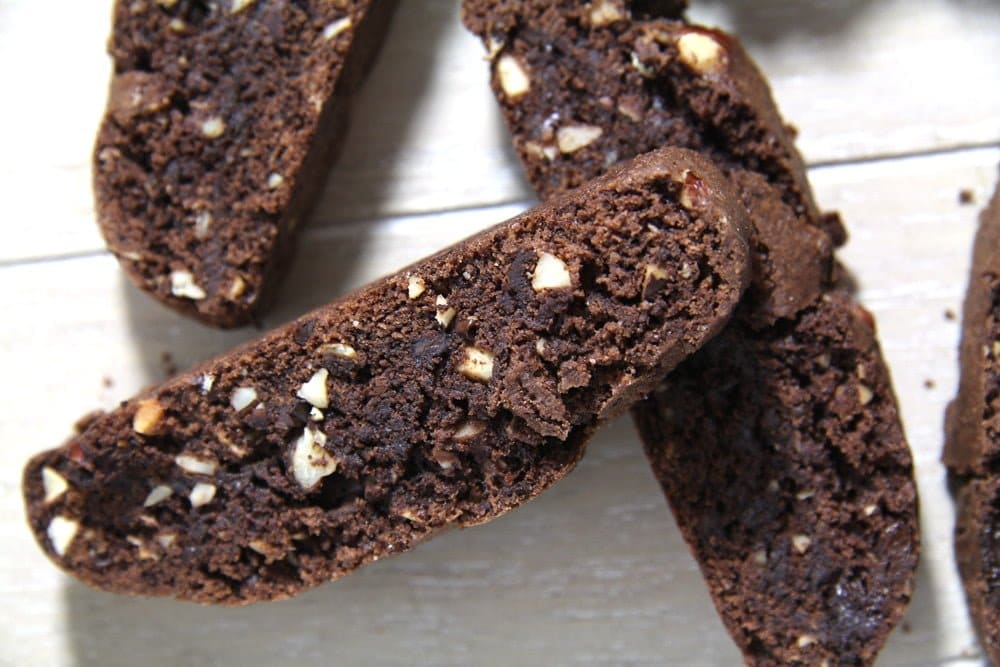 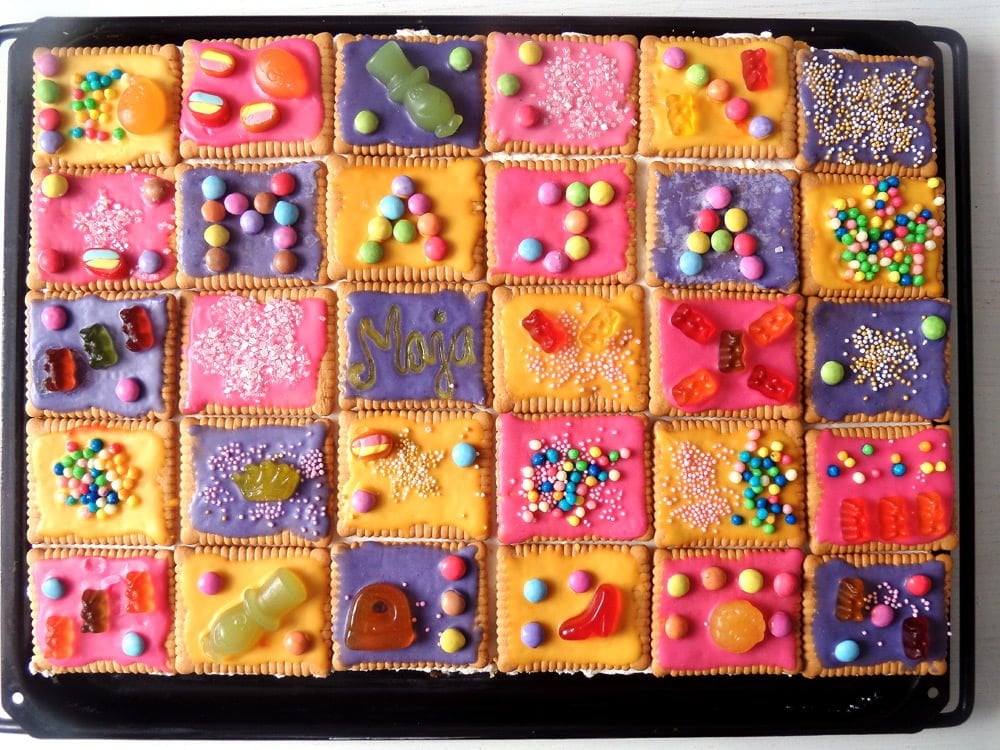 How To Make Mint Syrup

We have very similar cake- ” Spotted dog”. Recipe and ingredients are little bit different, but look like similar 🙂 When i can, I will share this recipe.
And yes, this is the best for first cooking 🙂

In Germany there is also a local version called Cold Dog! Not a very invinting name for a cake… 🙂

I think Turkish Delight only makes it into the biscuit salami in some parts of the country, I have the feeling it is more in the South. I’ve never had it with Turkish Delight, I imagine it would look pretty with all those bright colors. 🙂

WOW! These look fabulous! I’ve never had anything like these and can’t wait to try them. Thanks for sharing this recipe Adina.

So lovely to revive an old recipe from your childhood! I’ve never had a dessert salami like this before, but it looks so decadent and perfect with a cup of coffee! The biscuits must add a really nice textural component 🙂

I had a similar class in school, but it didn’t include sewing. We never made anything quite as delicious as this cake. It looks lovely!

We had a similar class in middle school call Home Economics. It was my favorite, though it only focused on food prep, cooking and kitchen basics. No sewing, etc., probably the reason I can’t sew worth a darn or properly iron a shirt, lol, my poor husband 🙂

This recipe is impressive for only having a few ingredients. Think I’ll have to make it with my nephew, he’ll love the sweet “salami” slices! Thanks for sharing the recipe and fun trip down memory lane.

This is lovely Adina. When I first saw the title I was thinking – now how is Adina going to mix chocolate with salami and have a good outcome? Ha ha. Looking forward to all the cakes in your series to come! I love baking. Have a beautiful day my friend!

One of my childhood favorites too. Love the idea of adding rum into it. Must try it next time.

What a view! It looks very similar to the Italian salami and the Brazilian one too. It is pure deliciousness!

Recipes from our youth are always the best! I’ve never had a dessert salami before, but it looks lovely! I bet this tastes great in the morning with a cup of tea or coffee! Cheers!

Loved reading about your childhood memories, really similar to mine. Making biscuit salami will always be a lovely memory for me, since it’s one of the first desserts (or maybe the first) I ever made by myself. I could probably eat biscuit salami every day and not get tired of it. Can’t wait to see what kind of Romanian desserts you’ll bake next, I really need a great recipe for Lamaita 🙂 Have a lovely weekend!

This is such a fun recipe! We have a biscuit salami in Italy too – we call it Salame al Cioccolato. I’ve never made it at home but I remember eating it at school parties when I was younger. Funny how totally different places can still have similar traditions. 🙂 I’m excited to see the other cakes you’ll be making!

Hahaha, I used to hate these as a child, because it was on the menu every week. 😀 But then I had them a few years ago and it brought back so many good memories, I just couldn’t stop eating these. Now I wanna make these myself too!
BTW love your pictures!

Wow! It looks like one of my favourite meat products, i.e. black pudding !!! I think it sounds equally delicious as a sweet dish.

though i’ve never eaten this, i always love the way it looks–some very creative mind came up with this beaut! nice post. 🙂