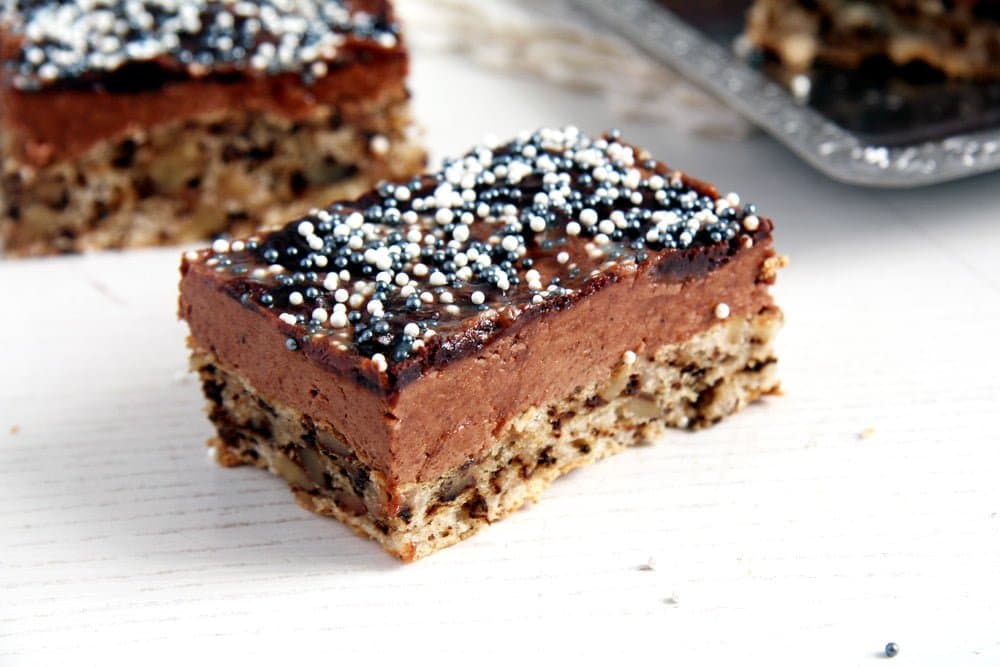 How to make the Romanian cake Queen Marie or Regina Maria, a decadent yet easy to make cake with a walnut base and a chocolate buttercream topping.

This Walnut Chocolate Buttercream Cake or Regina Maria is another famous and very old Romanian cake recipe, just like Greta Garbo Cake from Tuesday. You could probably find a recipe for this cake in any old recipe notebook of a long gone grandmother or great aunt in Romania, it is one of those typical Romanian cakes that anybody with a bit of interest in baking or eating cake knows. I had heard about it, of course, but as somebody who used to not eat any cake, I must admit I have never had this cake before, not before I have baked it myself recently. 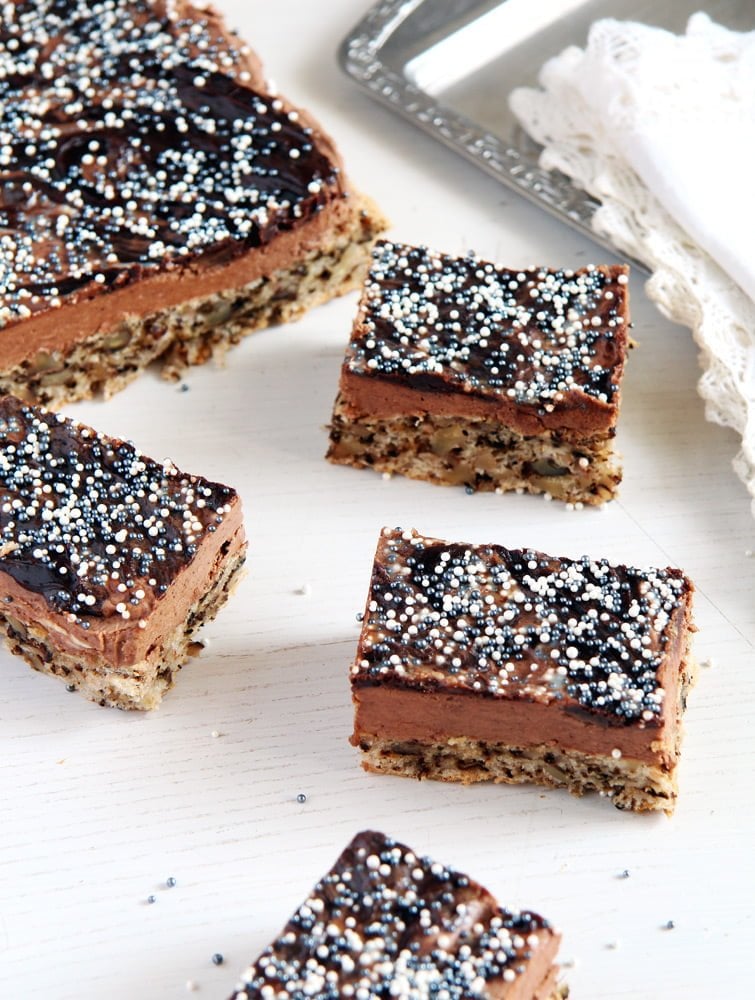 Why the name Queen Marie? Not sure actually. I’ve really tried to find something to explain the name of this chocolate buttercream cake, but no success. I only know that the Queen Marie in question was the Queen Marie of Romania, the wife of King Ferdinand of Romania, who ruled Romania between 1914 and 1927. Queen Marie was the daughter of Prince Alfred, Duke of Edinburgh, who was the son of the well-known Queen Victoria. Marie married Ferdinand in the 1890s and she quickly became very popular in Romania, she was definitely more popular than her apparently rather weak husband. Maybe it was her popularity that enticed a pastry chef to create a cake named after her or maybe she used to enjoy eating a cake made in this manner. 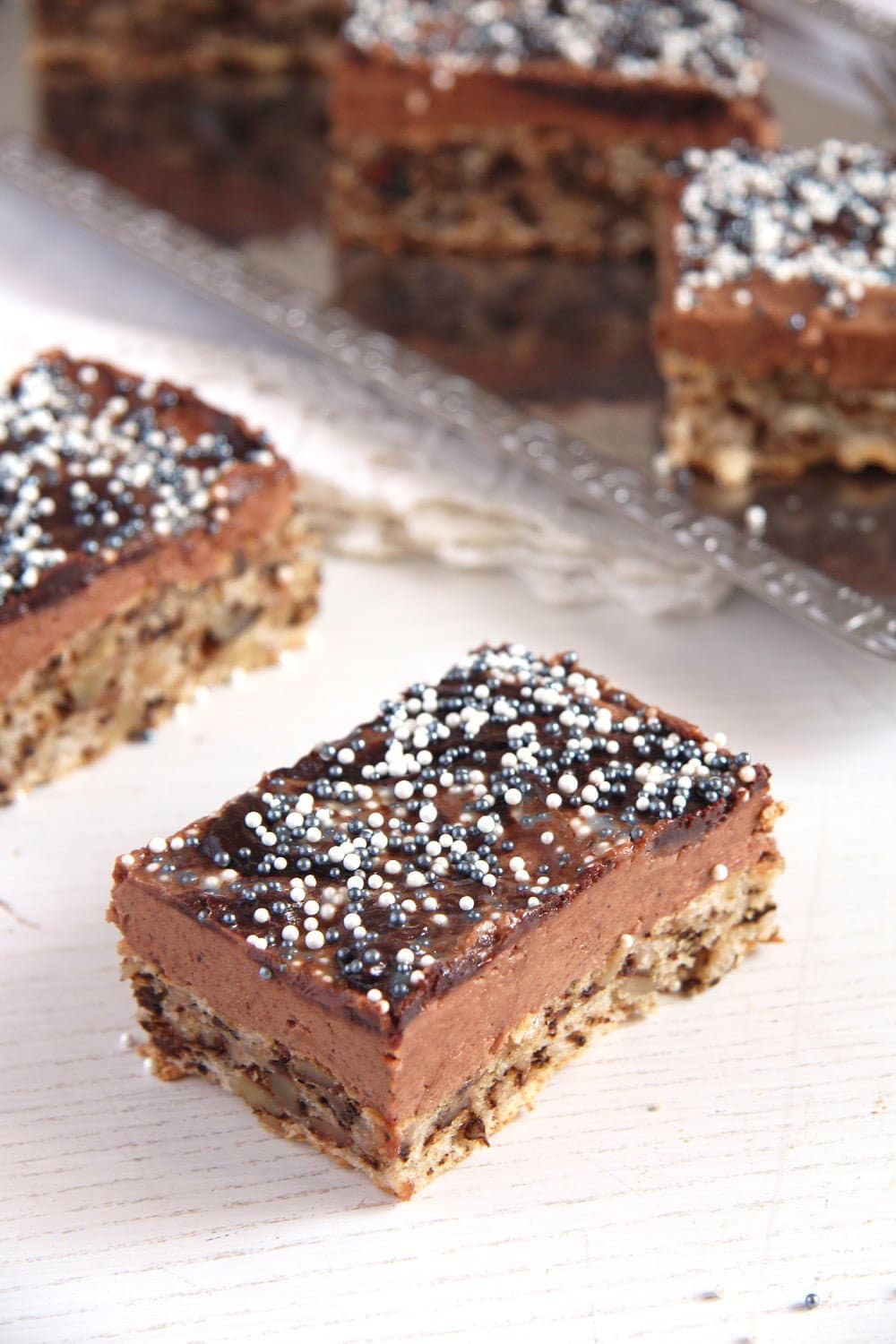 However, this recipe for the Walnut Chocolate Buttercream Cake or Regina Maria is indeed a royal delight. 🙂 The delicious walnut base made only with the egg whites and lots of roasted walnuts, which give it an amazing flavor is topped with a luscious chocolate cocoa buttercream layer and finished with even more chocolate in form of a shiny ganache. I am talking about real royal decadence here. 🙂 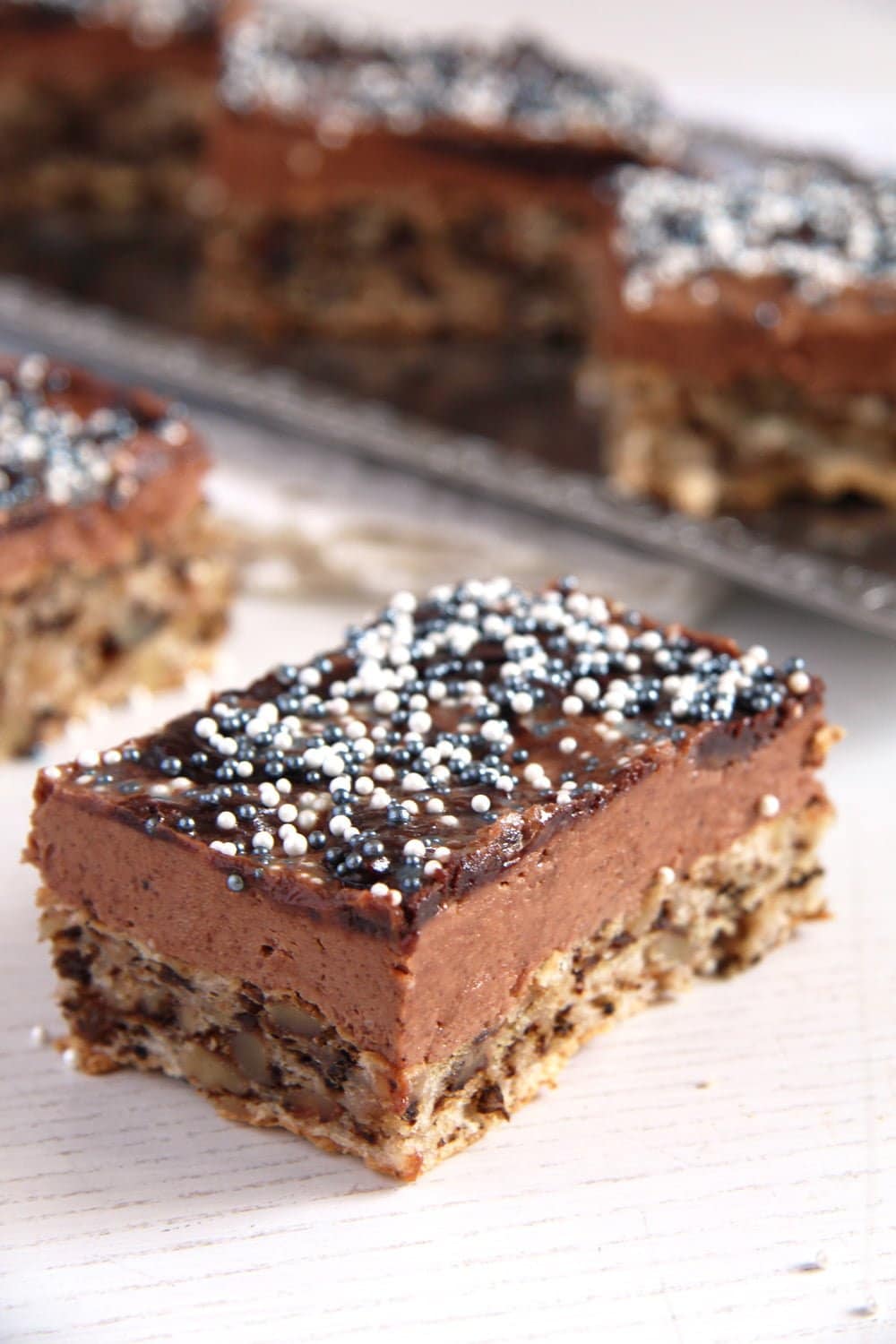 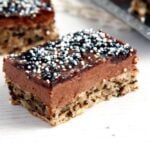 You can make the base and the egg yolk-chocolate filling one day in advance, they both have to get cold before finishing the cake.

Preheat the oven to 180 degrees Celsius/ 360 degrees Fahrenheit. Butter a baking dish of approximately 23x33 cm/9x13 inches and line it with baking paper.

Give the walnuts to a pan and roast them until golden and fragrant. Immediately transfer to a large plate and let cool while you beat the egg whites. Chop the walnuts roughly.

Separate the eggs. Set the egg yolks aside, you will need them for the buttercream.

Mix the flour and the baking powder together in a small bowl.

Give the chopped roasted walnuts to the egg whites, sieve the flour mixture on top and fold everything in the egg whites very gently. Give the mixture to the prepared pan and bake for 20 to 30 minutes or until slightly golden. Let cool completely and make the pudding in the meantime, the pudding also has to get cold.

To make the filling place the egg yolks, finely chopped chocolate, sugar and cocoa powder in a heat-proof bowl. For the bain-marie choose an appropriate pot, so you can fit the bowl on top. Pour some water in the pot but make sure that the water doesn't touch the heat-proof bowl. Put the bowl on top of the pot and warm gently, making sure that the water doesn't start to boil. If it starts to simmer remove from the heat. Whisk the egg yolk-chocolate mixture continously until the chocolate melts completely the the mixture thickens. It will not take very long. Let the mixture cool completely at room temperature.

Beat the soft butter until pale and fluffy. Slowly start adding the chocolate mixture, one tablespoon at a time while beating all the time until everything is incorporated and the buttercream is fluffy.

Place the base back to the clean baking dish. Spread the buttercream on top and level nicely.

To make the ganache pour the heavy cream in a small pot and bring to a simmer. In the meantime chop the chocolate very finely, I prefer to process it finely in the food processor. Place the chocolate into a bowl and pour the hot heavy cream on top of it. Let stand for 5 minutes, then whisk with the hand until shiny. Make sure is not too hot, you can leave it for a few minutes, then spread the ganache on top of the cake.

Sprinkle the cake with silver or chocolate sprinkles or whatever you like, this is optional. 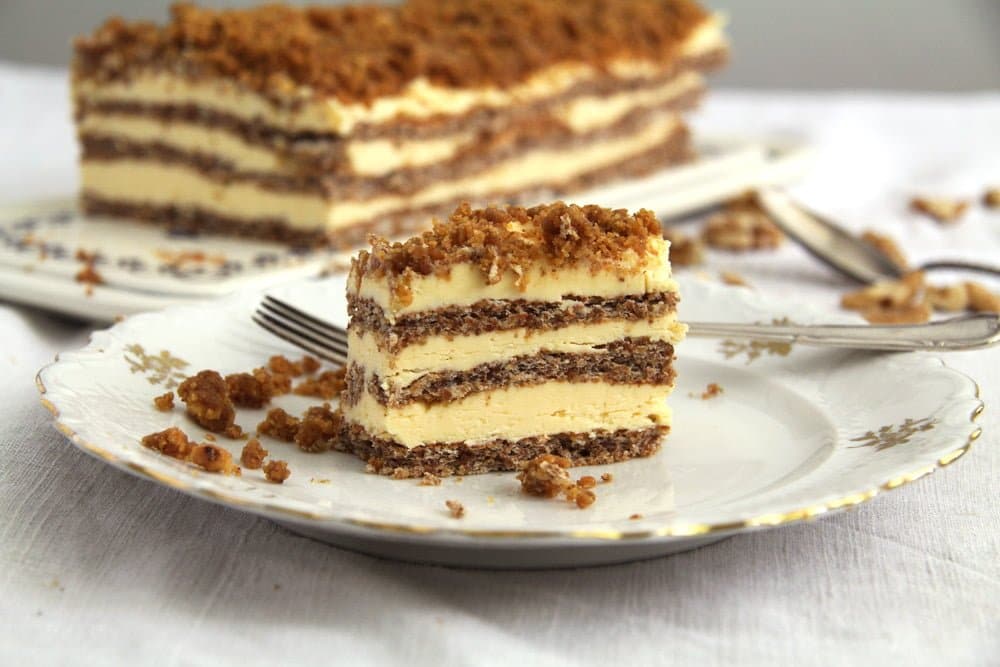 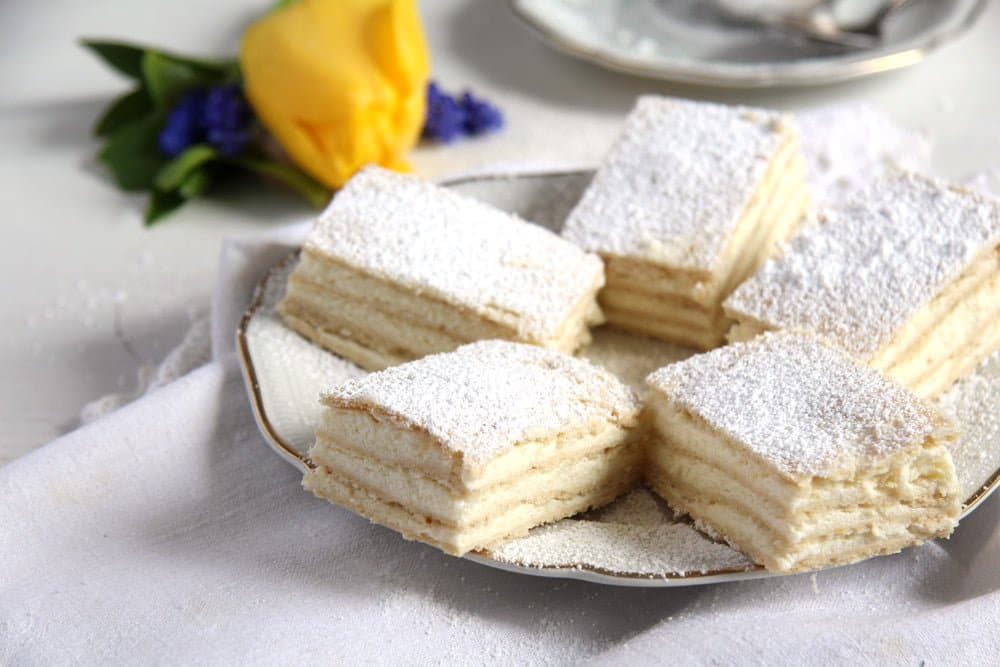 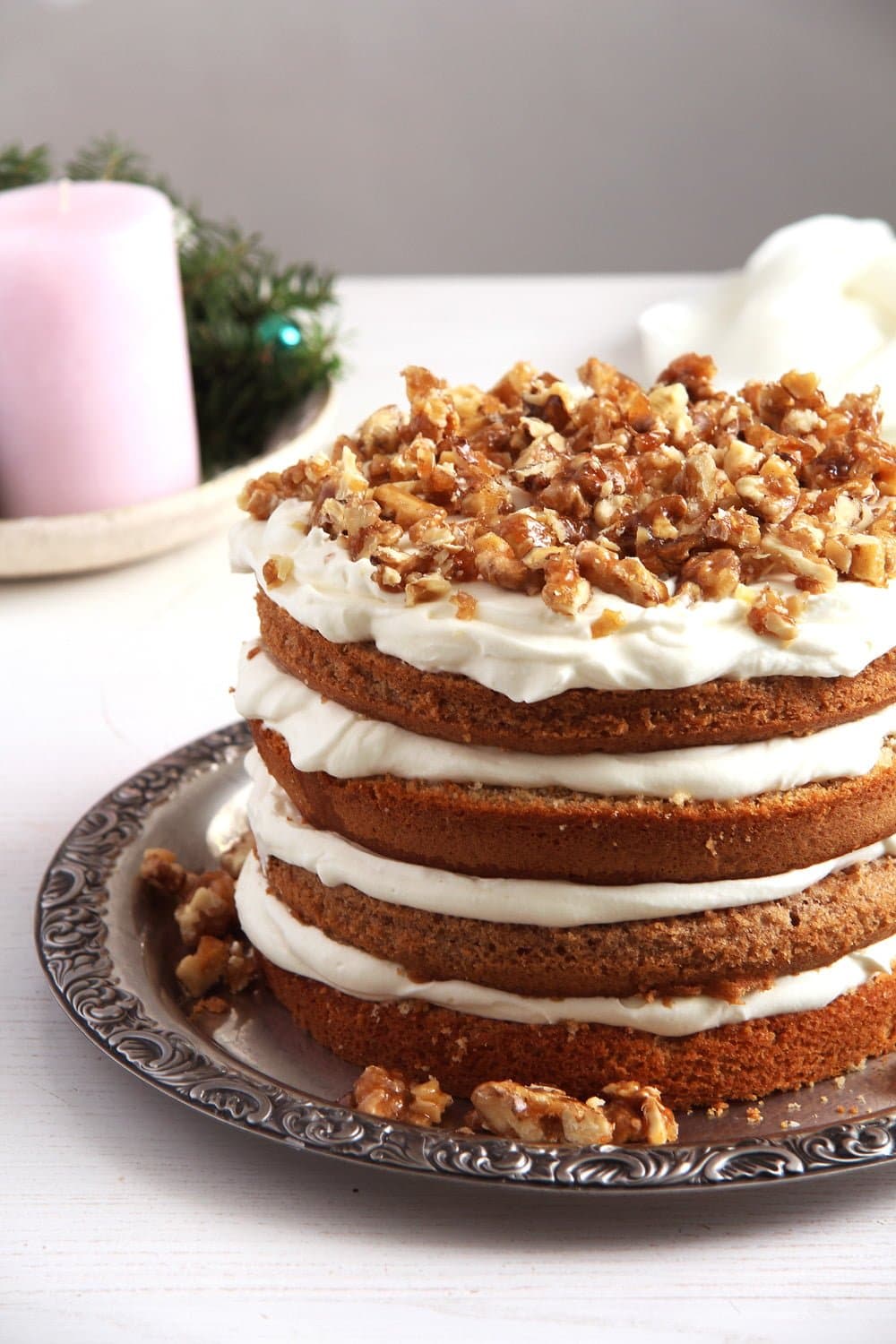 Fantastic looking walnut chocolate cake, Adina! Really pretty, and SO full of delish flavor. So much in love with that yummy base. Thanks for this lovely recipe. 🙂

Now I believe, that Romania is Country of Cakes . So many delicious cake recipes, I have allready full list..:) 🙂 Please, give me some time, to fullfill this and bake and taste all these cakes 🙂

I made this cake today for my husband’s birthday and everyone loved it – my mother in law made a comment today about egg yolks and now I am terrified that if by following the recipe instructions the yolks weren’t heated enough to kill off bacteria. Should I worry? What steps do you usually follow?

I put the chocolate sugar and cocoa powder over a pot with water filled in it. When the chocolate began to melt I had the yolks. The water below did get to a boil but again I am really scared (granted, before trying this I’ve only ever made American buttercream).

Don’t worry, Cristina. The eggs were heated enough, so not raw anymore. And I am sure your eggs weren’t cracked or particularly full of dirt when you opened them. My rule about eggs is to never use cracked eggs and I always wash my hands immediately after handling eggs, before I touch anything else. Salmonella is on the eggshell that’s why washing the hands is important and it can get inside the egg if the egg is cracked, that is why I discard cracked eggs. I am glad you liked the cake though, it is a wonderful cake. 🙂

Thank you, Adina! After reading your comment I went to the kitchen and ate an entire row of the cake! I look forward to making your carmelized walnut cake next!