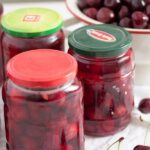 How to preserve cherries – the easiest way of preserving cherries, either sweet or sour, in a low sugar way: only 1 or 2 tablespoons sugar (to taste) per jar.

We have a lot of cherries this year. In comparison to last year when we didn’t have any. Two years ago we had even more than now, but I think the three years before that was also bad, either nothing growing, worms inside, or birds eating them all.

Fast forward to July 2018. We never had so many cherries as we have this year. I’ve made 17 large jars of preserved cherries, made cherry butter, countless cakes, and desserts and the tree is still heavy.

People normally preserve sour cherries this way, but I have been preserving my sweet ones like this for years now. But just that you know, sour cherries can be preserved exactly the same way, you might want to add an extra tablespoon sugar in that case, but it is not mandatory.

The canning is easy and quick, the only thing a bit annoying about it is – again- pitting the cherries. I bought this cheap cherry stoner a few years ago and I’ve never regretted it. I still wish I could be Harry Potter and conjure all of those pits out of the cherries with a flick of my wand, but as that is not possible, I will have to do with a cherry stoner.

How to sterilize the jars?

What to do with them?

They keep very well and for quite a long time. The longest I had them were 2 years and they were perfect. But how to use them all? 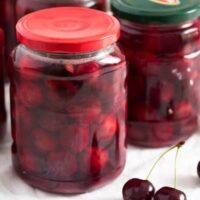 How To Preserve Cherries - Low Sugar

There's a couple of differences with the way I bottle cherries. I dissolve the sugar first and fill with sugar water. Also add some lemon juice to the sugar water, it preserves cherry colour better during storage. I don't tighten the lids; fill the pan with water to a level where it just doesn't go into the jars. After boiling for +/- 20 mins, tighten the lids after taking out. During cooling it will then make a good vacuum seal inside the jars .. better for preservation.

@David Holdaway, thank you. It's good to know.

Hi David. Thank you for the feedback.

Hi Rachel. Cover the jars with water. You will need quite a large pot and it is preferable to use a can lifter and mittens when you remove the jars from the pot.

Hello! When filling the pot with water to cook the cherries, how much water do I put in? Should it entirely cover all the jars, or partially up? Thanks!