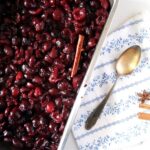 Roasted cherries served on top of strained yogurt, a simple and wonderful cherry dessert made with fresh sweet cherries.

You will not believe how good these roasted cherries are. Amazing!

I made them a few days ago and we had the cherries with some strained yogurt. We liked them so much that I made another batch the very next day.

How to roast cherries?

This recipe is so easy but the taste will knock your socks off.  (Can I actually say that when referring to food?).

It is something completely appropriate for guests as well, you can make it well in advance, it looks great on the plate, it is light after a several course meal and the taste… well, I’ve mentioned that before… AMAZING!

How to make strained yogurt:

The strained yogurt has to be made in advance, you should start with it the afternoon or the evening before you want to serve it.

You can also serve the strained yogurt with canned apricots or cherry sauce, with preserved blueberries or berries (fresh or frozen) mixed with a little sugar.

I weighed the cherries after I pitted them, so 1 kg/ 2.2 lbs prepared cherries. The amount you use doesn’t have to be exact, some more or less cherries will be fine, just make sure that the roasting pan you are using is large enough to keep them all in a single layer.

The cherries can be served hot or cooled.

The roasted cherries will be more than what you need for serving with the yogurt. Keep the rest in the fridge and enjoy it with porridge or muesli in the morning.

You can serve the roasted cherries with some plain cake as well or stir them into unstrained yogurt, you can have them with semolina or rice pudding or with ice cream as well. There are lots and lots of possibilities. 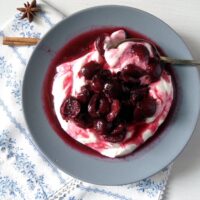 I almost managed that. :)

Coco in the Kitchen

Those cherries look amazing. I probably could eat the whole lot!