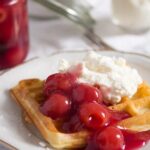 Thick German waffles served with cherry sauce and whipped cream, this is one of the most popular German desserts.

How to make thick and crispy German waffles at home, a perfect Sunday breakfast or a really decadent dessert.

We do love waffles in Germany! Either thickly covered with icing sugar or with cherries and cream.

What is the difference between Belgian and German waffles?

The heart-shaped ones might be slightly thinner due to the waffle maker, but otherwise, they are pretty much the same.

Belgian waffles were introduced in America by a Belgian person, Maurice Vermersch.

They became a huge success in North America, where they started being served with a topping of sliced strawberries and whipped cream. Nowadays, you can top your waffles with just about anything.

I do like the waffles as they are, I like their taste and texture and unless I am really in the mood for a sumptuous dessert, I am happy with eating a plain waffle sprinkled with just a hint of icing sugar.

When still studying in Germany, ages ago, I used to work at the local flea market. The market was a huge hall with many different areas where people would bring their stuff and try to sell it on weekend, once a month.

I didn’t have anything to sell, I just worked in the so-called “Waffelstube” – Waffle room. So, obviously I was making waffles, coffee and tea. So many waffles, thousands of them during the 2 years or so I worked there. So, you might say, I am a German waffle expert. 🙂

We used to have these ancient Belgian waffle makers, battered and old, needing to be greased before each batter addition, difficult to clean at the end of the working day. But, they made the best waffles ever, absolutely perfect: thick, totally crispy on the outside and fluffy on the inside.

I still use the flea market batter recipe to make waffles at home. We used to make it in huge buckets there, we needed about 6 buckets full of batter every day and we used to stir that amount of batter with an agitator machine, the kind my husband uses for mixing lime wash paint.

So, I had to scale down that recipe a lot. 🙂 And I also changed two other things: first of all, I use butter instead of margarine, and nowadays I prefer to whisk the egg whites before I fold them into the batter.

How to make waffles?

Sprinkled with icing sugar is a practical way of serving waffles. This way, you can also eat on the hand.

The typical German way of serving them is with cherry sauce and whipped cream sweetened with vanilla sugar. So good, you should definitely try this version!!!

The American way of serving them is either with sliced strawberries and whipped cream, with different kinds of syrups, like maple syrup for instance, but other sorts as well.

Any kind of berries, topped with whipped cream and drizzled with syrup or runny honey would be great as well.

The waffles keep well for one or two days. Let them cool completely, place them into an airtight container or wrap them well in cling film/plastic foil or aluminum foil.

When ready to serve again, you can easily reheat the waffles in the toaster. Alternatively, place them on a baking tray lined with baking paper and reheat at about 100 degrees Celsius/ 200 degrees Fahrenheit until warm and crisp again.

The waffles can also be frozen. Wrap them tightly and freeze them. Reheat them as instructed above.

You can also eat them at room temperature. We often eat the leftovers for breakfast, topped with jam (strawberry, apricot, etc) or drizzled with a little honey.

How to make vanilla sugar

To make your own vanilla sugar, place some granulated sugar into a bowl and stick a vanilla pod in the sugar. Place the lid on and use it as needed. Stir the sugar from time to time (when removing some for using in recipes for instance). You can refill the jar with sugar many times before the vanilla pod would stop being able to flavor the sugar.

Alternatively, you can use empty vanilla pods to make vanilla sugar. Cut the vanilla pods into pieces and place them to a food processor together with granulated sugar. Process until you obtain a powder. Fill in jars and use as needed in a recipe. Waffles are the true beauties you know ;) i love these cherries and yeah I am waiting for the blueberry sauce recipe because i have tried this blueberry waffles just a few days and i loved that..hope you will share soon.

I was thinking of making Belgian waffles, as they look fab and are delicious too. But I don't have a waffle maker. I should buy one. Your waffles are so appetizing.