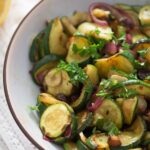 Sauteed zucchini and onions: a simple and delicious way of cooking zucchini in the pan. Serve as a side dish or light main meal.

An easy and wonderful recipe for sauteed zucchini with onions! I was so impressed by it the first time I’ve cooked it, that I couldn’t stop telling about it to just about anyone around me for several days. And I cooked the dish 3 times during that same week.

Mind you, I had lots of zucchini from a friend’s garden… so I kept throwing them in just about anything I’ve cooked lately, including cakes… Or this super delicious vegan zucchini curry.

The list of ingredients might seem long for just a simple recipe, but don’t let that put you off from cooking the dish. They are all ingredients you probably have in your cupboard anyway, basic things like garlic, raisins, and almonds.

And talking about the original recipe, I’ve learned how to saute zucchini with onions and raisins from Diane Henry’s book Food From Plenty. (Amazon affiliate link)

I have discovered Diane Henry’s books only recently, I bought the kindle edition of her poultry book A Bird in the Hand: Chicken recipes for every day and every mood and liked it so much that I’ve bought almost all of her other books in a matter of days… (Amazon affiliate link)

You can serve the sauteed zucchini with onions either warm or at room temperature, I have actually had it at room temperature more often than not.
The recipe makes a great side dish for chicken breast, for instance. However, I have had them most of the time on their own with a slice of crusty bread or, my favorite version, with a very large dollop of hummus or fava bean dip. Soooooo goooood!

The nutrition is calculated for 2 servings if the dish is intended to be the main meal. If serving as a side dish, the quantities should be enough for 4 people.

More zucchini in the pan 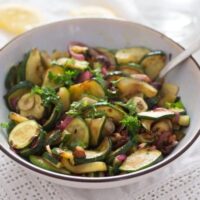 You know Adina - your recipe are never boring. A summer squash dish with almonds and raisins? Very creative and one I need to try. We're growing yellow zucchini which I would think would still work with this dish. Sounds so good!

Hi Adina! You are so blessed to have friends that share their produce! I'm thinking about this zucchini, but also the blackberries from a recent recipe. So generous. I have never tried zucchini prepared this way, but this looks so flavorful. I love the red onions and can imagine the almonds give a lovely crunch to it all. I can understand why the children might not request this, but I would have to be thinking... then more for me!! Wahoo! :) Thanks for sharing this beautiful recipes, I always love seeing what is going on in your amazing kitchen. XO