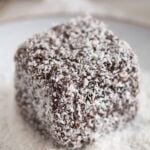 What is a lamington?

A lamington is an Australian chocolate cake, one of the most popular Australian cakes. Together with the pavlova and the peach melba, they are the peak when it comes to desserts in Australia. No wonder… these lovely squares are as delicious as they are easy to make.

And if you would like to try another popular Australian cake, have a look at this Lemon Slice recipe.

Basically, all you have is a sponge or butter cake, which gets cut into squares. Dip these squares in chocolate glaze or icing and roll them in desiccated coconut.

So not only delicious and easy to make, but rather cheap as well. You won’t even have to buy chocolate to make the lamingtons; the glaze is made with unsweetened cocoa powder.

The butter cake, a bit sturdy at first, gets so wonderfully moist and delicate after being dipped into the chocolate. The icing gives it just the right amount of moisture it needs to become soft to achieve a perfect consistency.

The history of the lamington

Who invented the lamington cake? There are quite a few different stories out there.

First of all, there is a debate about whether the lamingtons have been first made in Australia or New Zealand. The most popular story I’ve read on the subject mentions Lord Lamington, who was a British Governor of Queensland at the end of the 19th century and the beginning of the 20th.

The story goes that his maid-servant dropped a piece of sponge into a bowl of chocolate glaze. The Lord didn’t mind that but suggested the square be dipped into desiccated coconut as well to stop it from being too messy when eaten with the hands. (Source: Australian Lamington Official Website)

Another source (The Guardian) mentions the same Lord Lamington, who discovered this cake in a bakery in New Zealand prior to his time spent in Australia, a “Wellington – a double sponge dessert, dressed in shavings of coconut intended to imitate the snow-capped mountains of New Zealand.”

To support this theory, a painting is mentioned, which shows a Wellington/ Lamington cake on the counter of a cottage painted by JR Smythe in 1888.

But, although fun to read about all these things, the main thing remains that either originating in New Zealand or Australia, the modern recipe remains one of the most popular foods which these countries have to offer.

How to make lamingtons? 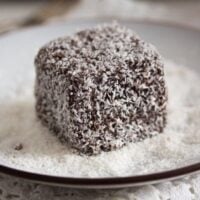 One of the reason why loved staying in Australia because of there delicious food.

The story about them potentially being from NZ was a prank by The Guardian on April fools in 2014, they have said so themselves.

Hi, I'm curious how you would adjust the cake recipe for high altitude? I'm in Colorado at around 5600 ft.

Hi Mary, I am sorry, I have no idea about that.

Hi, thanks for the recipe. I was just wondering where can I find the type of baking for this recipe?