Pilaf cu legume – vegan vegetable pilaf, a quick, delicious and comforting dish for any time of the year.

We used to eat lots of rice in my grandmother’s house in Romania, but never ever the way I would mostly eat it now in Germany, which is plain as a side dish for meat, vegetable or Asian dishes. I don’t even remember my grandmother ever cooking plain rice, I think it would never have occurred to her that people could actually eat and enjoy plain rice. 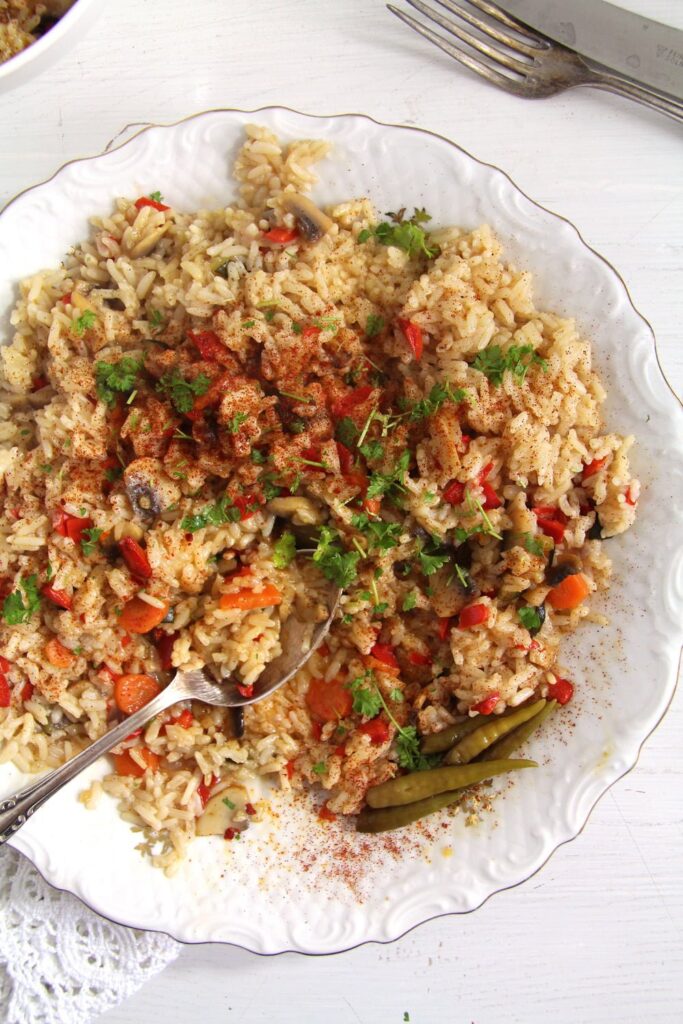 The simplest rice we would get would be rice cooked in chicken stock and that quite rarely, maybe on one of those days when my grandma didn’t have so much time for cooking, she did work full-time all her life after all and continued working long after she was actually retired. Otherwise her rice was always cooked rather slowly and contained lots and lots of things. And it was never eaten as a side dish, we always had rice as a main with some pickled vegetables or salad on the side.

She made the best chicken pilaf ever. That was among us, her grandchildren, an undeniable fact. I was the only one who grew up in her house and I cannot really say that, except my sister, her other grandchildren spent much time in her house, but all of them do remember that chicken pilaf. We used to call it “pilaf lipicios” – sticky rice, because it was such a thick, soft yet creamy affair and mostly because of the slurping sounds you would hear when you would take some of it on your fork or spoon. I really cannot describe that sound, it was heavenly… 🙂 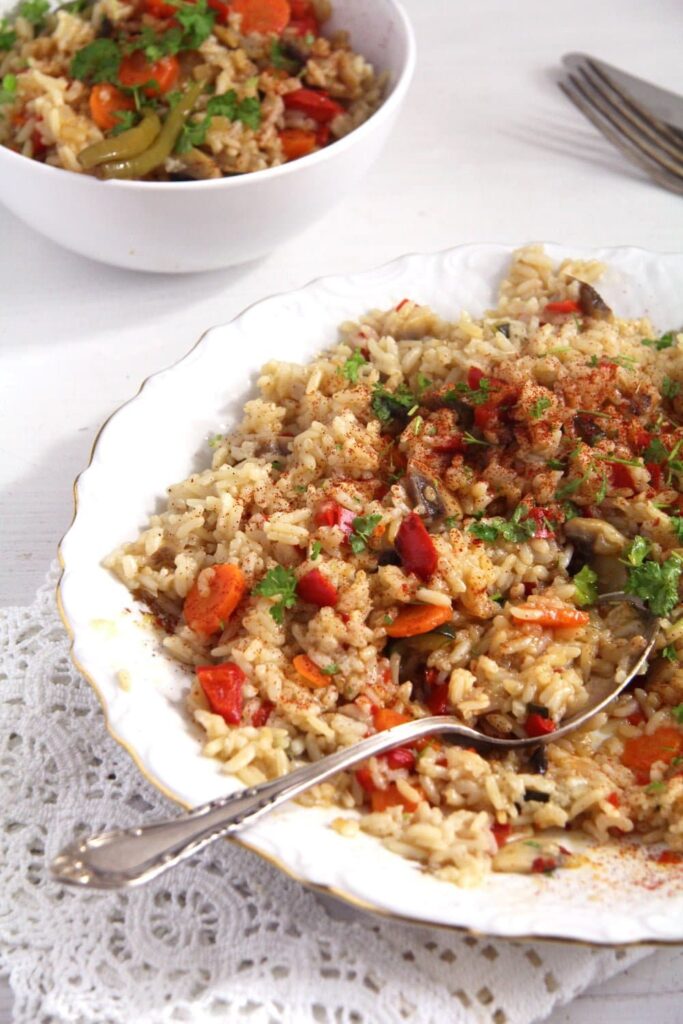 But I am drifting away here, that chicken rice is not our recipe today… Instead I chose this vegan vegetable rice or pilaf, which is its vegetarian/vegan version, something to eat during the fasting time but not only. My grandmother would make this kind of rice all the time, with whatever vegetables she happened to have: with peppers and tomatoes in summer or with lots of onions, carrots and canned mushrooms in winter. You don’t have to stick to the veggies I used, take whatever you like and is in season in your part of the world. 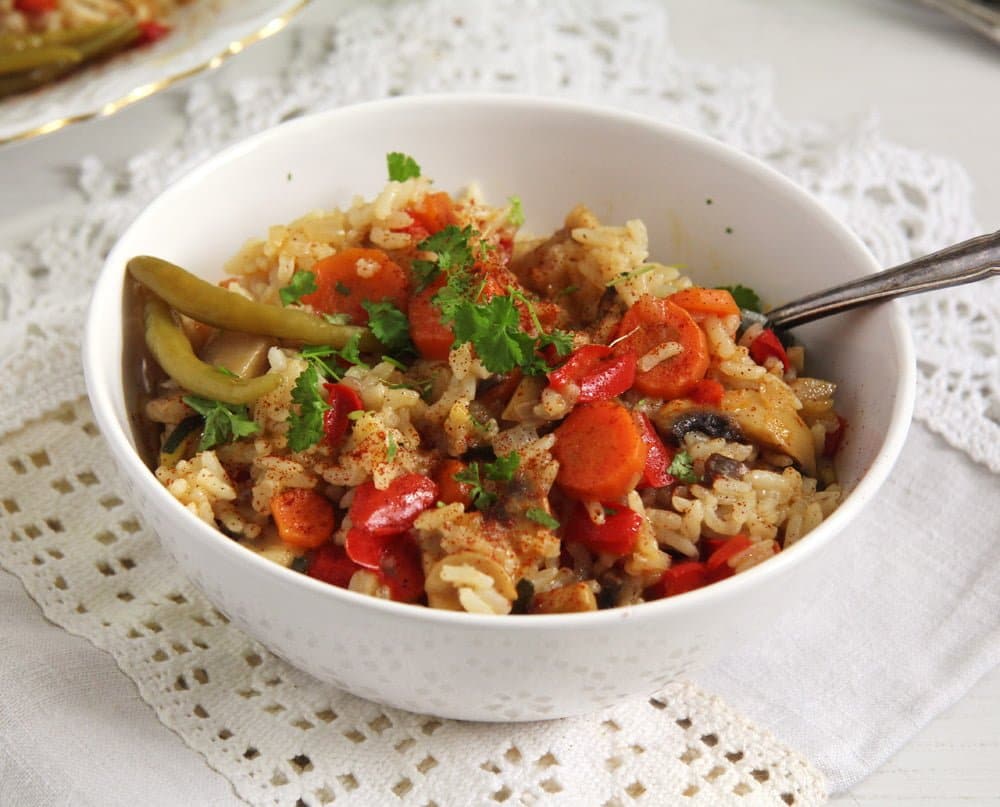 One word of caution: like in the case of any pilaf/rice congee I have ever eaten, either Romanian style, Asian or Middle Eastern style, the rice will be overcooked, it will be soft and you will even be able to break it with your spoon if you try. No need to do that, I am just saying it, so you will get the picture better. So, don’t think that there is something wrong with the recipe, there isn’t, the rice is supposed to be like this and it is really really delicious. 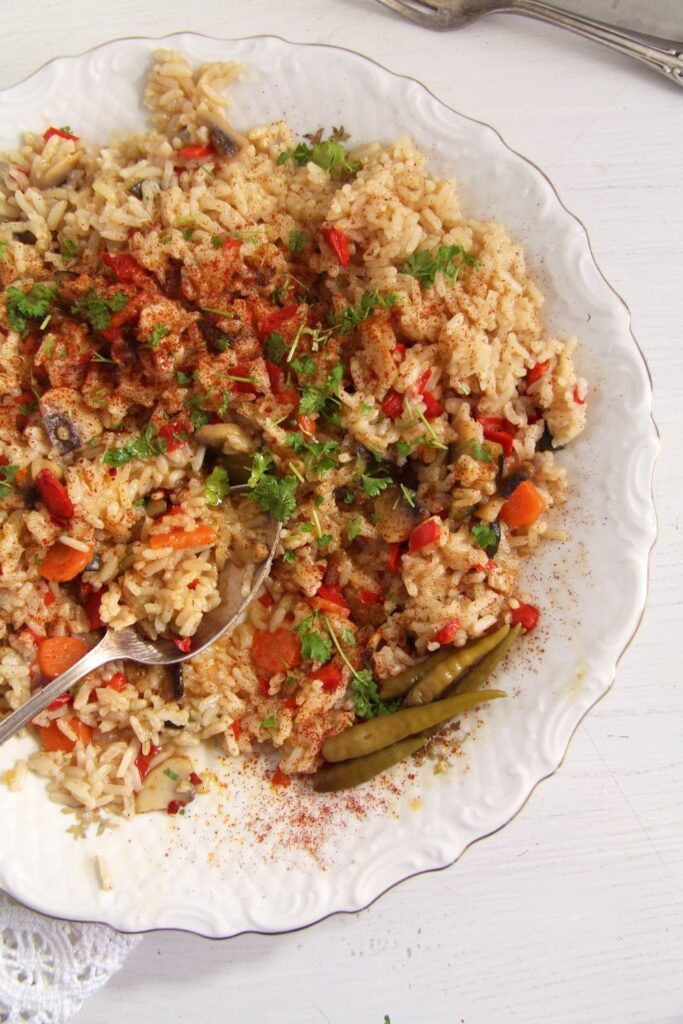 Prepare the vegetables: finely chop the onions and set aside.

Peel and slice the carrot, clean and chop the peppers into small stripes. Wipe the mushrooms clean and slice them. Cut the zucchini into stripes or cubes as well. Place the rice into a fine mesh sieve, wash it and let it drain well.

Add salt and pepper to taste. Stir well and place the pot in the preheated oven. Cook in the oven for about 20-30 minutes, without stirring. The rice is done when all the liquid has been absorbed and the rice is soft (check). The vegetables will all be at the top of the rice at the end of the cooking time. Either serve it like that or give the rice a gentle stir before serving.

Sprinkle with lots of parsley and serve with pickled vegetables, green salad or cabbage salad. 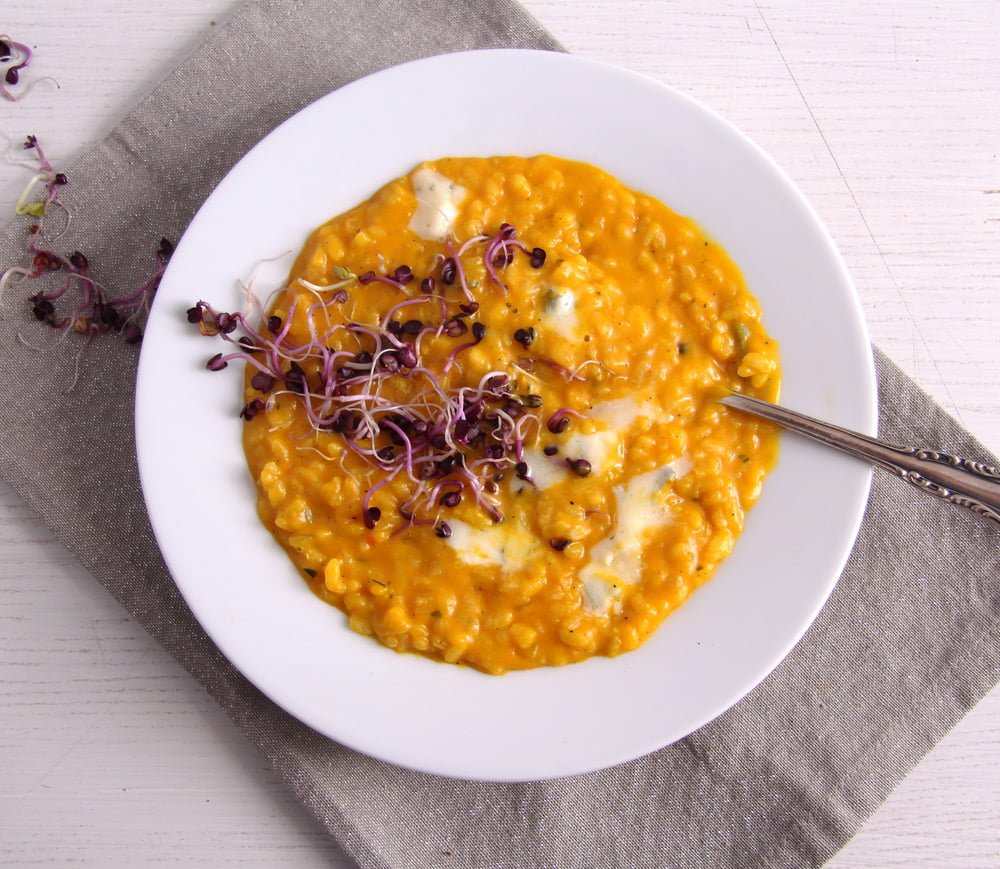 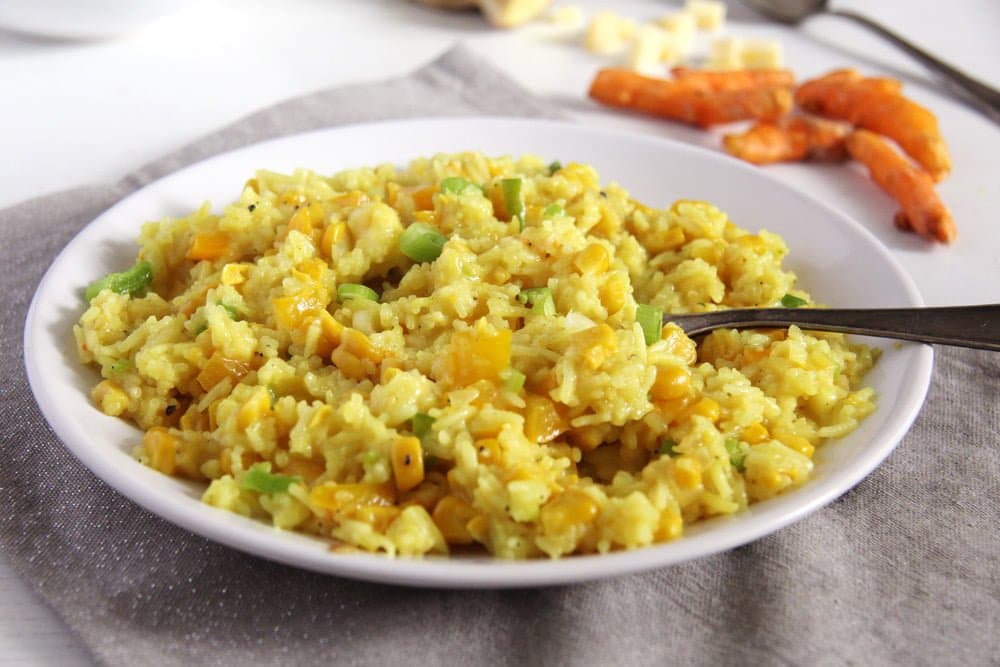 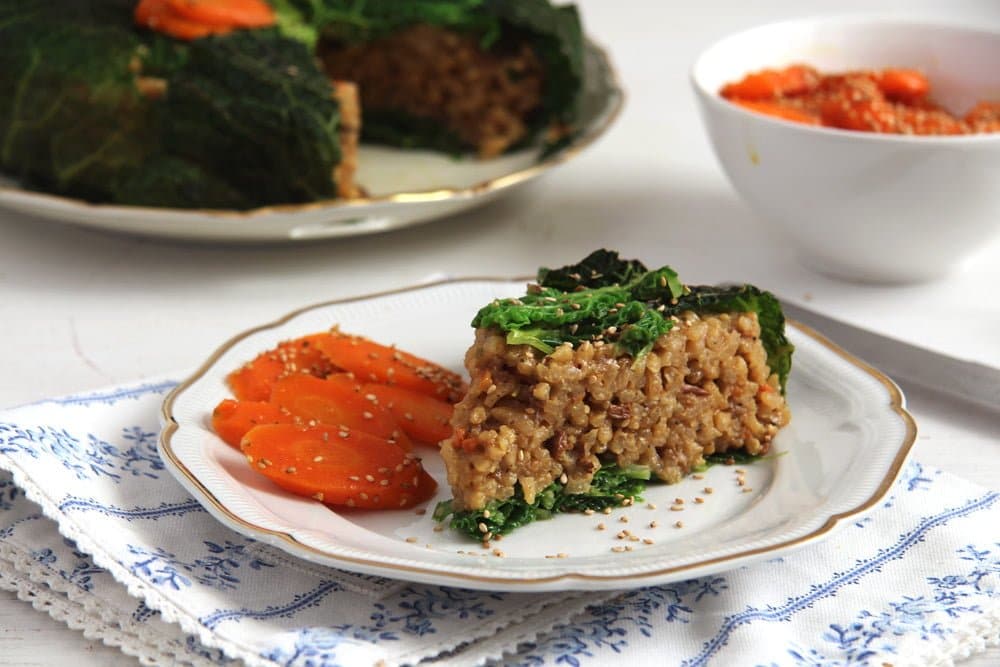 Parmesan Frittata (with Leeks and Peas)

I can eat this kind of rice every day! Love your pumpkin cheese risotto too.

This sounds wonderful. I love how food can take us back in time and bring fond memories of loved ones.

I love rice dishes of any kind especially when they are soft and cling to each other. A big pot of comfort food

I am interested in all kinds of rice dishes – totally fascinated by them! I love them all, too. This looks delicious and I love how you served it with a helping of memories of your grandma and what she used to make. : )

Looks beautiful! Thank you for sharing with us your childhood memories.

Thanks for all the great tips Adina, I learned a lot today. This looks like such a tasty dish and your grandmother would be proud. I always enjoy hearing about your grandmother in your posts. Guess what? I might be in Romania this summer, in June. Yep. Not sure yet, but most of my family will be on a missions trip there and I’m thinking about coming too. We’ll likely be in Bucharest. I know you are in Germany now, but maybe you have some suggestions of what to be sure to see while we are there? Hope all is well friend. XOXO

We eat lots of rice and your recipe sounds very good. I think I’ll make some tonight to go with grilled chicken.

We’ve been eating a lot of rice dishes lately so I love finding another great recipe, especially one that has been passed down from generation to generation. One can’t go wrong with grandma’s rice. Looks yummy!