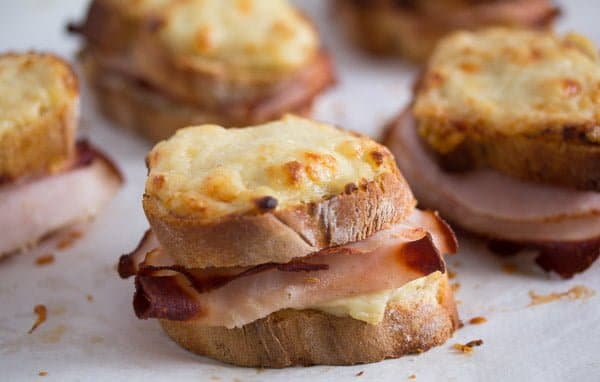 So France is world champion in football! And the World Cup has come to an end. But not the World Cup food series on Where Is My Spoon, I still have quite a few football recipes coming. I knew I would not manage to post all the recipes from all the participating countries in such a short time and initially I did not even mean to go through all the countries.

But it has been such fun choosing, cooking and eating the food from all these countries, that I just could not decide what to leave out. So, I will keep going until I am finished, I am pretty sure nobody would mind that. It is just food after all. 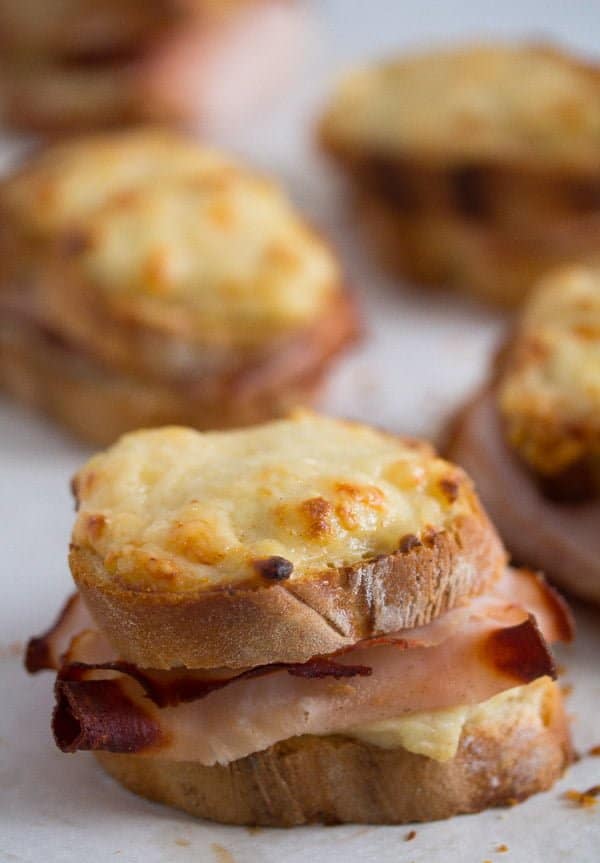 What is a croque monsieur?

A croque monsieur is a French ham and cheese sandwich, topped with Béchamel sauce and which is then fried, grilled or baked.

The result is amazing, I have rarely eaten such a good sandwich. Crunchy French bread, hearty ham and cheese and then that creamy, velvety Béchamel sauce. I have never even heard of topping a sandwich with Béchamel sauce, so I was not even sure I would want to do that.

I have contemplated other recipes using crème fraîche instead, but in the end I have decided to make the original. And I am so glad I did! No doubt the crème fraîche is good as well, but I cannot even imagine it could top this Béchamel sauce version, it was just too good. 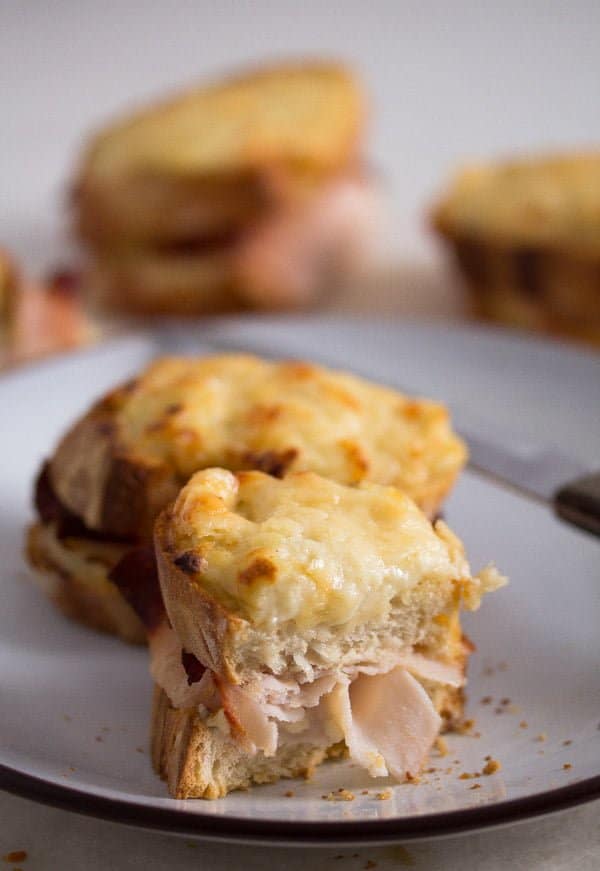 I am totally recommending making this croque monsieur, even now that the World Cup is over, it makes a wonderful easy dinner and it’s perfect when entertaining casually as well. These croque monsieur sandwiches or the Coca Cola Glazed Sausages, the Russian Chicken Fritters or the Tunisian Tajine, all food that can be served at such an occasion.

You can make the Béchamel sauce in advance and cover it with cling film/plastic foil directly over the surface, this will keep it from getting a skin. So, you can make it even a day ahead and keep in the fridge.

The sandwiches can also be put together in the morning, covered with foil and baked in the evening. I did that, I have made them for me and the kids for lunch, saved some of them for my husband and baked them fresh for him in the evening. Absolutely no difference to the fresh ones made for lunch. So good, I was glad my husband couldn’t eat all of them, so that I could have another one myself. 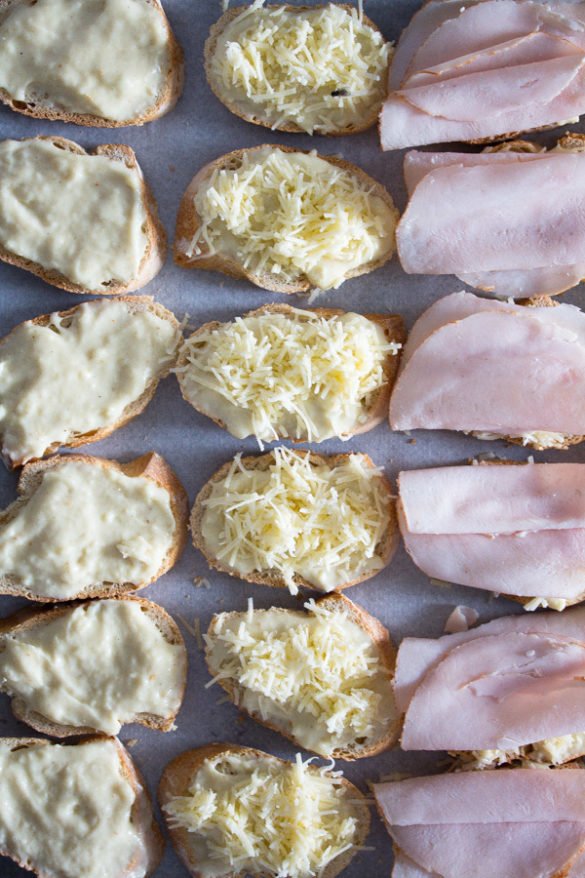 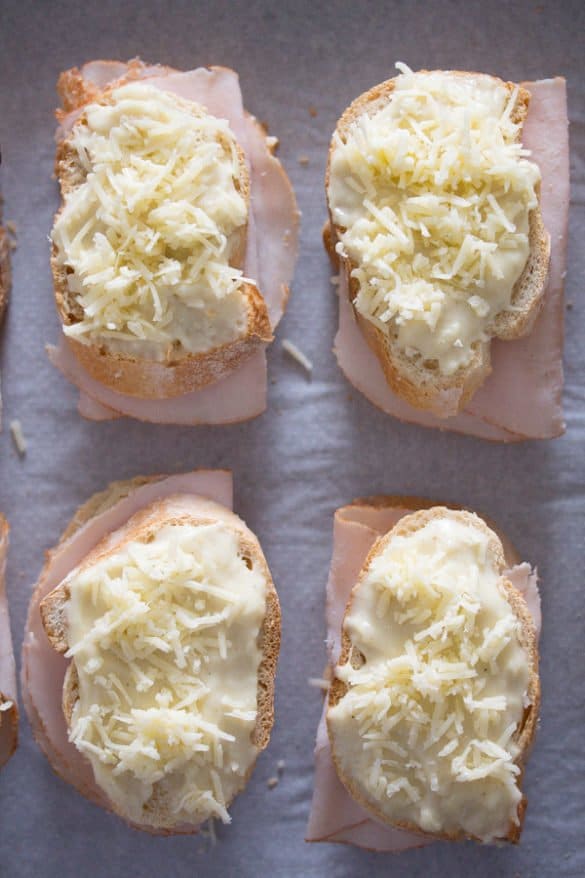 History of the Croque Monsieur

How did the croque monsieur or mister crunch become so famous? You can find it in many French cafes and smaller restaurants, it is usually offered for lunch and people seem to go crazy for it. No wonder, it is that good! Not exactly diet or health food, but… that’s the way it is!

And, by the way, the assumption that French people don’t get fat (there were even books written about it) is just a myth. According to the latest figures, about half of the French population is overweight… sad but true. Well, I don’t know if I feel so sad about it, I used to get pretty jealous when hearing about people eating butter with butter and butter without any consequences…:)

So, white bread, butter, ham, cheese and Béchamel sauce (made with more butter and white flour), this is the most decadent and one of the most delicious sandwiches I have ever made. But I have a few healthier and equally delicious sandwich recipes on my blog, you can splurge on those if you wish, they definitely have less calories than the croque monsieur.

For instance, this mushroom toast with sourdough bread and poached egg, this roasted tomato toast with egg or this asparagus toast with soft boiled egg and Parmesan.

The origins of the croque monsieur are not exactly clear, they rarely are when it comes to food (have a look at the Lamingtons post for another controversial story on the origins of a certain dish).

One story says that the sandwich was born when some workers left their lunch sandwiches too close to the radiator. The cheese melted and the bread got toasted and so the workers invented the croque monsieur by mistake.

Another story claims the croque monsieur was invented in a cafe in 1901. The cook run out of the baguettes needed to make the lunch sandwiches, so he used brioche slices which he topped with ham and cheese and then grilled or baked.

from 1918, madame de Villeparisis would let them know that she had ordered croque-monsieur at the hotel for them. 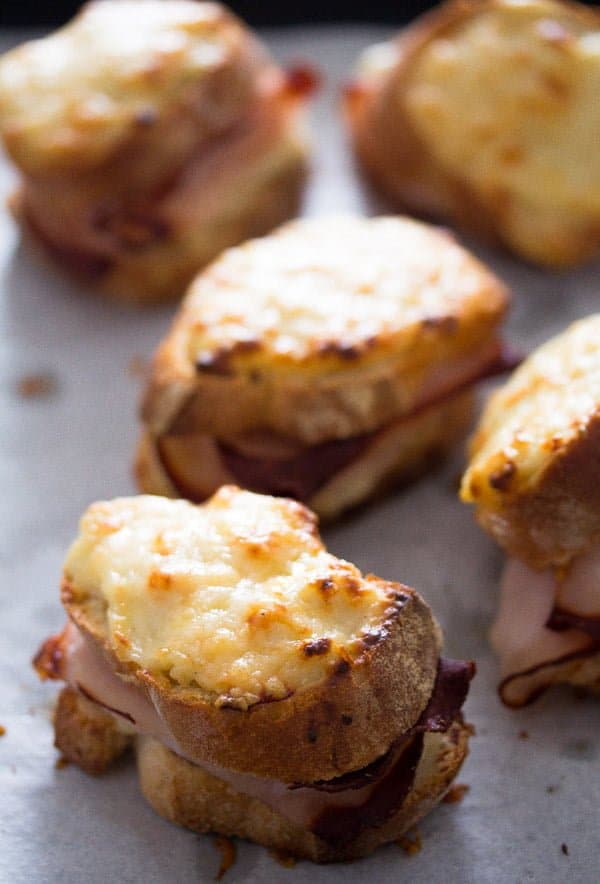 The most famous variation is the croque madame, which is basically the same sandwich with a fried egg on top.

Other variations included croque poulet – made with chicken instead of ham (I would probably love that, I think I will make it soon), croque norvegien made with smoked salmon, croque made with blue cheese, one made with potato slices or with Andouille sausage. Well, I would probably like to try them all… 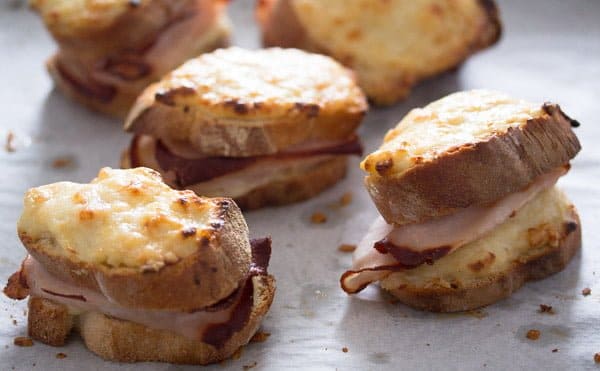 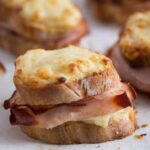 To make the Béchamel sauce melt the butter in a smaller saucepan. Sprinkle the flour and stir until the flour starts to get some color, not too much color, just slightly golden.

Slowly start adding the milk while whisking continuously to avoid the formation of clumps. Keep adding milk and whisking until the sauce is smooth. Add the mustard, nutmeg, salt and pepper generously and the grated garlic. Stir well and let bubble, stirring often, until the sauce thickens and becomes slightly elastic. Set aside.

Slice the baguette into thick slices, about 1 cm/ 0.4 inches thick, I had 20 thick and small slices.

Bake the croque monsieur in the preheated oven for 10 to 15 minutes until the sauce and the cheese are bubbly and golden brown.

The Béchamel sauce can be made in advance, covered directly on the surface with cling film/plastic foil and kept in the fridge until later or the next day.

The croque monsieur can be assembled a few hours in advance. Keep the sandwiches in the fridge until ready to bake.

I had about 20 thick slices baguette, so 10 sandwiches. You can use a larger type of bread, if you wish, my baguette slices were thick and small, just 3 or 4 bites per sandwich.

Thank you for clearing up the myth about French people not getting fat. How can they not? 🙂 This is an exciting post for me because I had my first croque monsieur for breakfast the other morning. It was smothered in cheese and had an egg on top. Very yummy, but SO rich and filling. These little sandwiches look just the perfect size and with all the goodness. Thanks for sharing!