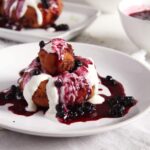 Traditional Romanian fried doughnuts – papanasi (papanash) – made with cottage cheese and topped with smetana and jam.

These papanasi or Romanian fried donuts/doughnuts are the best donuts ever!!! Soft yet crunchy, oozing with sour cream and blueberry jam, ever bite is a complete delight. No wonder that they are the most popular Romanian dessert!

I am not a doughnut person generally, I buy them rarely and make them myself once every five years or so, I would say. It is not that I don’t like them at all, but at least not as much as to ever crave them unless I see a scrumptious photograph on one of my favorite blogs.

But what I do crave from time to time are these papanasi (pronounced papanash).

These cheese doughnuts topped with jam are one of the best known Romanian desserts, something you will probably find on the menu of every Romanian restaurant out there.

They are quick and easy to make and utterly delicious, something that both children and grown-ups will love.

I am telling you, if you tried them once, you will remember them for the rest of your life, and you will probably look for a recipe and try to make them yourself at home. They are that good! 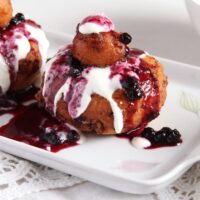 It's not smetana , it's smantana, corect your article

No need to correct it, thanks, it's right the way it is.

This looks amazing! My son is cooking this for a school project on Romania and we are hoping all goes well.

Has anyone tried mixing US sour cream with Whipping cream to add extra sweetness the US kind is lacking?

Would the fat free versions of cottage cheese affect the recipe, or is it best to just stick to full fat?

I always use full fat for this recipe.

Hello, I have a question. Can you make the dough the day before and form and fry the papanasi the next day? Thanks .

Hi Christina. I don't think that would work.