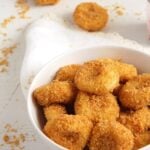 Last week I introduced you to one of my favorite Romanian desserts, one of the best known desserts in Romania: Romanian Cheese Doughnuts with Jam – Papanasi.

Papanasi prajiti to be exact, which means Fried Cheese Doughnuts. Today I will give you the recipe for another version of papanasi – papanasi fierti, which means that the papanasi are cooked and not fried. So, this would be the healthier version as well!

Same Romanian name, pretty much the same ingredients, though the end result is something very different. Last week’s papanasi were decadent, calorie-laden, fried doughnuts oozing with jam and smetana/ crème fraiche, while today’s papanasi are light, delicate dumplings (a bit like gnocchi), sweetened only by the sugary breadcrumb coating.

I could not say which of these papanasi I like best. When I eat the fried ones, I like the fried ones better, (although there is always this guilty feeling involved – I can never eat something fried with an easy conscience). 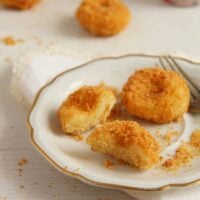 They look delicious! And I know they also are delicious. My grandmother used to make them for me :)

My grandma never made them for me, but I do make them for my children sometimes, they make a fast an easy meal or dessert. :)

I have a wheat allergy, but I bet my kids would love these!

Thanks, this is something new for me. They look wonderful, and it is something I would like to try. However, what does this mean? "•2 regular level tablespoons vanilla sugar (not American measuring spoons)" Not sure what your "regular" tablespoon is! Thank you!

Hi. I mean an everyday teaspoon or tablespoon used for stirring in your coffee or for eating soup. The American measuring spoons, which are used for measuring when baking or cooking are a bit larger than the everyday spoons.

There is a very similar kind of "gnocchi" in Poland! Also coated with breadcrumbs. I find their sweet and savoury flavours mixture addictive... Yours look fantastic! I love their cute round shape (Polish are gnocchi-like shaped). The only difference is the lack of semolina (only, flour, eggs and fresh curd cheese which from what you say is exactly what you use in Romania.... not as smooth as quark but still fresh... look out for Polish or Russian grocery shops! They sell the cheese which might be similar to the Romanian one).

I know so little about Romanian food but I'm happy to say that your posts have been educating me about it!!! I would love to try one of these!!